Here is an update on the state of the COVID-19 pandemic in El Salvador.

The official government website shows that new confirmed cases have been trending lower from a second peak reached around New Years.  These are cases revealed by the roughly 2500 coronavirus tests El Salvador conducts in various places across the country each day. During the course of the pandemic, the government total of confirmed COVID-19 deaths has climbed to 1662 through February 4, although that number is recognized to be an undercount.  As of February 4, there were 399 Salvadorans listed in  grave and 77 listed in critical condition. Over the past 10 days, an average of 8 Salvadorans per day have died from confirmed cases of the disease.  Hospital capacity appears to be sufficient after the government’s work during 2020 to update some existing hospitals and build a separate COVID-19 hospital.

On January 20, the head of the World Health Organization tweeted some recognition of El Salvador's efforts to date: 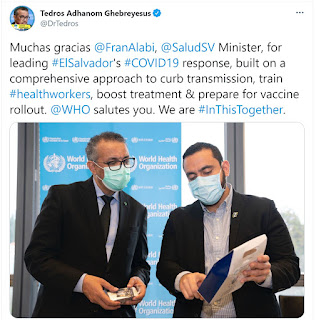 Large gatherings of people are a potential risk to change the current downward trend.   Last weekend the country held the championship of its national soccer league in Cuscatlán Stadium in San Salvador attended by thousands of fans, sitting close together in many parts of the stadium.   Hundreds also crushed together in San Salvador and San Miguel in the days before the match to buy their tickets.

All the major political parties are having campaign events and rallies around the country involving large crowds.

Salvadorans seem to wear masks with little complaint, but social distancing frequently is not possible or gets ignored.   Hopefully masks will be enough.

El Salvador has been approved to receive an initial round of 16,000 doses of the Pfizer vaccine designated for healthcare workers which should arrive in February.    Some time after that, El Salvador should start to receive more than 300,000 doses of the AstaZeneca vaccine.   Both of these allocations come through the global COVAX initiative.   No word yet on when the 2 million doses which El Salvador separately negotiated with AstraZeneca will arrive.   It will require more than 12 million doses to achieve Nayib Bukele's stated goal to vaccinate everyone who wants to be.

El Salvador’s airport remains open with incoming passengers required to show proof of a negative COVID-19 test received in the 72 hours before departure.   Persons who have been in the United Kingdom or South Africa in the preceding 30 days are not allowed to enter.

The 2021 school year is commencing with all education institutions in the country ordered to continue in virtual modes, as has been the case at all times since last March.

Don said…
El Salvador is the #1 safest country for journalists out of Mexico, Guatemala, Honduras, and El Salvador.
11:36 AM

Don said…
Regarding COVID in El Salvador, Bukele's government attempted to shut down maquilas and other factories that cause the virus to spread among the working class. The Bukele government had a deal worked out to freeze rent, credit card payments, etc. while also subsidizing half of the workers' wages in exchange for letting them stay home until the virus was under control.

BUT these measures were ruled unconsitutional and BLOCKED by the diputados of the legislative assembly.

ALSO, it is important to note the way that this blog and El Faro have demonized Bukele since those measures were attempted.

Textile companies have an interest in making Bukele out to be a dictator. These types of issues are conveniently left out of this blog's coverage of COVID.
11:43 AM

Don said…
4 or 5 more quick posts and you will have that hysterical pearl clutching post buried in the second page.
1:43 PM

The only thing that could have stopped COVID in El Salvador or any country was the same approach used in New Zealand: Strict lock down and no working in sweat shops. So, the Bukele government's plan was to provide a wages subsidy for the sweat shops' employees that covers half the salary, freeze rent, electricity, and water bills, and bring food to people. The plan was to try to ensure housing, water, food, and some wages while doing a strict lockdown until the virus was non existent.

FMLN AND ARENA said on TV when they cut the program: "Everyone will have to go back to paying for everything. There will be no more help."

Americans like Jim McGovern are threatening a Salvadoran president that actually tried that approach to COVID? DemocracyNow! calls Bukele a "conservative president". People are amplifying a false narrative that Bukele is a conservative and border-line authoritarian president. That is absurd.

In my opinion, COVID takes on the Salvadoran government should focus on facts like that instead of lazily ignoring them.

THE DIPUTADOS ended programs that would have protected Salvadoran workers.

Maybe Tim has law clients that run some of these businesses that are making money off of America's little labor colony. Maybe that would explain the BS takes about Bukele being a demagogue. Give me a break.

ForestBosque said…
Tim, I’m wondering how covid cases are counted. I have relatives in San Miguel and La Union, some of whom have called the Ministry of Health number (132), to report strong symptoms, but they never were tested (saying that they were told they would only be tested if hospitalized), and one died of respiratory difficulties who was never tested. I have been told of many other cases either directly from someone who was ill with covid like symptoms or who told me of a family member who was sick with such. In none of these cases was the person tested for covid. If I, someone who is only in El Salvador as a visitor, directly know of five untested cases, and indirectly of about 30 more, I wonder if reported statistics are really meaningful.
9:36 AM

Tim said…
The reported numbers of cases are just the "Confirmed" cases which are the cases detected by the 2500 PCR tests which the government processes daily. The government acknowledges that this does not count every case, and estimates of the size of the undercount are difficult to come by. I think the daily reported case count is useful, however, for showing the trends in the country and whether cases are increasing or decreasing, but not to give us the actual number of people who have ever been infected. This is not unique to El Salvador -- cases are probably undercounted in most countries.

The other number worth watching is the number of cases listed as "grave" or "critical." These are much easier for the government to count since they are people in direct contact with the healthcare system and usually hospitalized. Those numbers are currently trending down.

Unfortunately the government has refused to make any additional data about these cases public, so it is hard to get greater clarity.
9:50 AM

Don said…
Yes, the lack of clarity is very unfortunate. We won't be able to fully comprehend how many people died because the legislative assembly stopped the government from closing sweat shops.
11:16 AM

Don said…
Who has been asking for data "about these cases" to be made public? If nobody is asking, then is the Bukele government refusing?

That is how crazy you all are. There is no doubt about the impacts of COVID being higher than the official confirmed cases. That is true in EVERY country in the world.

The only thing that is we know is that shutting down the factories and freezing evictions, bills, etc. would have worked.

But only white countries like New Zealand that aren't labor colonies are allowed to do that. If a country tries to do that where the people are a labor colony of the U.S. then of course that would constitute a constitutional crisis.

Bukele is dictator? You all are full of it.

Don said…
Tell us all about your struggle to stop the u.s. gov't from funding the genocide in El Salvador back in the 80s or shut up about dictators.
2:05 PM

Don said…
You all are grasping for anything that could possibly be used to make Bukele look bad.
If you had used that Harvard diploma to stop the U.S. from funding a genocide back in the 80s we would be discussing completely different stuff right now. Instead my generation has to listen to you all preach about constitutional crises while we try to navigate our lives in a pandemic that was politicized by politicians from guess who's generation? Yours. Thanks for all the interpretation Time! I love it!
2:20 PM

You can't even vote in El Salvador. So, wtf do you even care about their day to day politics?

Don said…
If you are doing those things and I am mistaken, then blog about that at least once in a while so that we wouldn't think that you are just blogging about a democratically elected president of a country that you can't even vote in.
2:58 PM

Don said…
It's all like the Russians that supposedly caused Trump's election. LOL! I call election interference!!! ELECTION INTEREFERENCE! It is feb. Lay off it.
3:00 PM

Don said…
If I were a Harvard lawyer I would be figuring out how to put Stephen Miller and those psychopaths away. But instead you are going off on Bukele. That is suspect imo.
3:03 PM

Don said…
I don't care if it annoys you. I am going to be to you what you are to Bukele's people to show you all what it's like to have a comments section breathing down your neck.
3:25 PM

Don said…
I guess it boils down to:
Do you believe it is a human rights violation to send people into sweat shops during a pandemic?

That would be a good blog post. "Which Salvadoran politicians worked hardest to get people back into the sweat shops?"
4:17 PM

Don said…
The last time this blog mentioned a private company was when Mister Donut sold everybody old donuts.
4:26 PM