Showing posts from December, 2016
Show all

Stats point to growth in massacres and vigilantes

December 27, 2016
According to statistics from El Salvador's attorney general (FGR) and published in La Prensa Grafica , the number of massacres is increasing and more than 40% are committed by groups other than the gangs. From January 2014 through October 2016, there were 277 massacres in El Salvador, defined as multiple homicide events in which more than three persons were killed.    Of those massacres, the attorney general's office says that 157 (57%) were committed by the gangs and 120 (43%) were committed by vigilante groups known as "groups of social cleansing,"  by killers for hire, and by narco-traffickers.   The massacres in total claimed 1011 victims.   These FGR statistics contrast with statements from the National Civilian Police, who have always contended that the vast majority of murders in the country are committed by the gangs. 58% of the victims were identified as gang members, while the remainder did not have an identified gang nexus. There has been a p
Post a Comment
Keep reading

A Christmas Plea for Peace

December 22, 2016
Sometimes, at this time of year, we need to be improbably hopeful.   From WorldCrunch Spotlight: El Salvador, A Christmas Plea for Peace : Make it stop! That’s the message delivered this week by an organization of Protestant churches in El Salvador, Central America’s smallest but deadliest country.  The group, known as the Pastoral Initiative for Life and Peace, or IPAZ, is hoping that for the week between Christmas and New Year, gang members, security forces, operatives of so-called death squads and others responsible for the nation’s horrific homicide numbers will accept a temporary “peace pact.”  “This time of year lends itself to concrete gestures of peace. This may not be an open war. But the violence is killing us,” IPAZ declared in a statement released Tuesday .
Post a Comment
Keep reading

December 20, 2016
El Salvador's government yesterday increased the minimum wage for the country's workers. The increase in minimum wages ranges from a 20% increase in service and industry jobs to more than a 100% increase for certain agricultural jobs. Wages in the countryside for those working in the fields with coffee, sugar cane, cotton, and other crops will range from $200 to $224 monthly.    Wages in services, industry and factories will be $300 with a slightly lower wage of $295 for workers in textile and sewing maquila factories.  Minimum wages are calculated on an 8 hour day and a 44 hour work week The government says that these sizable increases will benefit more than 235,000 workers in the county.
Post a Comment
Keep reading

December 19, 2016
In a recent article titled  Deportation Profits ,   Hilary Goodfriend advances the argument that the growth of the call center industry in El Salvador is the product of powerful forces of big capital in conjunction with US government policies.  The policies generate the mass deportation of Salvadorans from the US, many of whom have English language skills. Call centers have taken advantage of this pool of labor in El Salvador, in an industry which has exploded over the past decade. Goodfriend writes: In this cycle of migration, deportation, and externalization, the heartless enterprise of deportation also reveals neoliberalism’s cruel and cynical efficiency. The rise of the call-center industry in places like Mexico, Honduras, Guatemala, and El Salvador signals that mass deportation has been reimagined as outsourcing: not only are jobs offshored, but so are the workers to fill them. She concludes: US foreign policy purports to seek to help provide alternatives to mass migration
Post a Comment
Keep reading 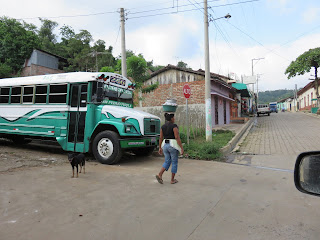 The letter's message was eminently clear, "From today, all bus drivers must give us a special contribution of their salary if they do not want attacks against their lives. Signed: Barrio 18."  One of us there took the paper to the bus route manager. The amount of money requested was exceptionally high for each driver to have to pay. I don't remember well if it was maybe $200 or $300. Immediately our boss called a meeting and the following day we spoke about it. This passage from  The Bus Route That Institutionalized Extortion in El Salvador  describes the basic threat hanging over all private bus companies in El Salvador: driving a bus requires paying extortion payments to the country's street gangs.   The article on the InsightCrime website and originally published by RevistaFactum has a candid interview with a bus driver whose employer decided to fund the extortion payments with payroll deductions from his employees' paychecks.   It's treated as
Post a Comment
Keep reading

14,000 Salvadorans captured at US border in 2 months

December 16, 2016
Almost 14,000 Salvadorans made up of  families with children as well as unaccompanied children were detained at the US border with Mexico during October and November.   This is according to statistics from the US Customs and Border Protection. If those apprehended are seeking asylum in the US, the odds are that they will not obtain it.  Families and children from El Salvador who seek asylum in the US have a very high rate of having their asylum requests turned down.  According to statistics assembled by TRAC , immigration courts have denied asylum requests from El Salvador 82.9% of the time between 2011 and 2016,   And those are the rates under the current Obama administration.  The odds will be even slimmer after Donald Trump is in office.
Post a Comment
Keep reading 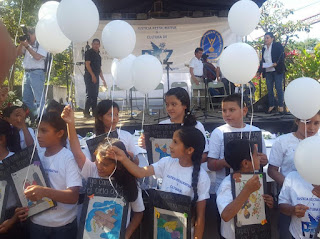 There was an official commemoration of the 1981 El Mozote massacre on Saturday.   Officials from El Salvador's national government including Vice President Oscar Ortiz, Secretary of Social Inclusion Vanda Pignato and Human Rights Advocate Raquel de Guevara, made appearances at the event on the 35th anniversary of the mass killing by the armed forces of El Salvador.    During the event, remains of several victims recently exhumed were delivered to their family members.    #ElMozoteNuncaMás  More images here .
Post a Comment
Keep reading 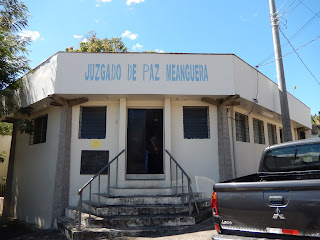 The white and blue Justice of the Peace offices sit at the corner of the central plaza in Meanguera, El Salvador.  From this humble office, Judge Mario Diaz Soto and his small team of assistants are presiding over one of the open legal proceedings involving perhaps the largest massacre of unarmed civilians in the Western Hemisphere, the 1981 El Mozote massacre .   That massacre took place 35 years ago today, from December 10-12, 1981. Judge Soto presides over legal proceedings directing exhumations to locate and identify the bodies of additional victims of the massacre at El Mozote and surrounding communities.  The legal case before Judge Soto began with a petition from Tutela Legal, the human rights office of the Catholic church, working on behalf of victims’ families, and concerned with the lack of progress and the manner in which previous investigations had been proceeding. At the exhumation site, a multi-institution team of workers is present.   There is a prosecutor from t
Post a Comment
Keep reading 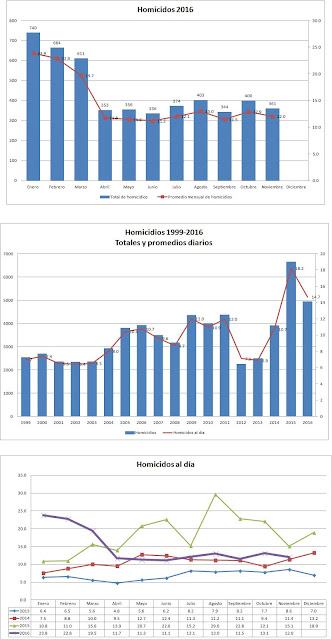