Showing posts from August, 2011
Show all

Hoping for a good bean harvest

August 28, 2011
On August 15, El Mundo reported that El Salvador's ministry of agriculture is forecasting a record red bean harvest.  A record harvest would allow the price of beans to drop from their high of this year between $1.20 to $1.30 per pound, back to 50 cents per pound.     The minister of Agriculture even suggests that the harvest might exceed El Salvador's domestic consumption, so that no beans would need to be imported during 2012. As a result of poor harvests in 2011 and earlier years, El Salvador has been a net importer of beans and corn.   This situation of recent decades contrasts with the 1980's and earlier when El Salvador was self-sufficient with respect to its production and consumption of these basic foodstuffs of the Salvadoran diet.   Currently El Salvador has to go out onto world markets to buy beans and corn.   Most beans are purchased from Nicaragua, but earlier this year El Salvador looked around the world to China for a source of beans . Commenting on the
Post a Comment
Keep reading

August 25, 2011
The Supreme Court of El Salvador, in a 10-2 vote, has decided to order 9 former military officers freed who were in detention following an order for their arrest from a Spanish court. An AP report describes today's ruling : El Salvador's Supreme Court refused to order the detention of nine former military officers indicted in Spain for the 1989 slayings of six Jesuit priests during the Central American country's 1980-1992 civil war.  The court ruled that no formal extradition request has been received from Spain. The ex-officers turned themselves in voluntarily in early August at a military base, but are not under detention.  The court has said it would consider an extradition request if one were received. But at present, all that is pending against the men in El Salvador is an Interpol request that they be located, something that has already been accomplished. Although this decision does not preclude the possibility of a future extradition, the decision was greeted b
5 comments
Keep reading

Former US cop on policing in El Salvador

August 21, 2011
Blogger Nanelle is a former police officer from the US. Now she lives in El Salvador as a US expat. She recently wrote on her observations of Salvadoran police in a post titled Whats Up With The Salvadoran Cops? . Among her thoughts: These men and women, who are given the awesome task of protecting public safety, are paid less than some restaurant employees.  Restaurant employees are expected to make up for their low wages in tips. Where does that put cops? Oh .... But we don’t like that do we? Read the rest of her post here .
2 comments
Keep reading

August 19, 2011
El Faro reported yesterday that president Mauricio Funes is planning to send a contingent of 22 Salvadoran troops to Afghanistan. The troops will support the international troops in that country in a non-combat role according to the report. Between 2003 and 2009, El Salvador had troops in Iraq, and for most of that time was the only country in Latin America to do so. Funes had campaigned against having troops in Iraq when he ran for president.
7 comments
Keep reading 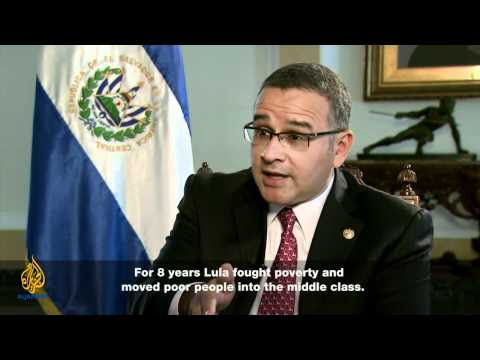 The English language channel of Al Jazeera, which has a long history of good quality reporting from El Salvador, posted on its website a twenty minute interview with president Mauricio Funes . The interview begins with a discussion of the crime problem in El Salvador and continues with a wide-ranging discussion of the challenges Funes has faced in his first two years in office. Well worth watching.
1 comment
Keep reading

August 12, 2011
El Salvador adopted child protection legislation last year, designed to help lower incidence of abuse, poverty and neglect.   Last week IPS reported , however, that the law is languishing for lack of funding by the cash-strapped Salvadoran government: The law is an improvement on previous child protection legislation, as it commits the state to ensuring comprehensive child protection and full enjoyment by children of universal human rights, such as health and education. It also includes safeguards against all forms of slavery, trafficking in children, forced and bonded labour, and the use of children in drug trafficking. An effort has been made to integrate child protection measures provided in other legislation, like the Family Code, and to construct a coherent legal system.  The slow rate of progress is attributed by children's rights organisations to a real lapse of interest on the part of President Funes and Finance Minister Carlos Cáceres, whose responsibility it is
Post a Comment
Keep reading

August 10, 2011
El Salvador has a new group of emerging artists.   Working in a variety of media, forms and spaces, they are struggling to get increased visibility.   My friend Danielle Mackey has profiled some of them in a series of articles for FNewsMagazine for the School of the Art Institute of Chicago.  Check it out.
Post a Comment
Keep reading

August 09, 2011
An interesting and fun read is the relatively new blog What's Up El Salvador? . It's written by Nanelle, who along with her husband Andy have relocated from the US to El Salvador. From the blog's description: Join a 43 year old former Ballet Dancer and Police Officer, her Coffee Roasting, beer brewing, husband and their 5 year-old daughter on their move to El Salvador, as they head through customs, find a home, enjoy daily living and explore the country; advising you all the way. Living life in El Salvador as American expats and loving it. The blog is full of wide-ranging posts about life in El Salvador, as seen from the eyes of a family of newcomers. Nanelle updates the site very regularly and her writing style is breezy and fun. It's now one of my regular stops. Check it out.
2 comments
Keep reading

August 08, 2011
The prosecution in Spanish courts for the murder of six Jesuit priests, their housekeeper and her daughter took another step forward today. In May of this year, the Spanish court indicted 20 former Salvadoran military officers for participation in the planning, execution and coverup of the murders. That indictment resulted in an arrest warrant going out through Interpol. Today, nine high-ranking retired military officers, surrendered themselves at a military barracks. The BBC describes : Nine former Salvadoran soldiers have turned themselves in to face charges that they shot dead six Jesuit priests, their housekeeper and her daughter during El Salvador's civil war. They had been indicted in Spain under its universal jurisdiction law, which holds that some crimes are so grave that they can be tried anywhere. The killing became one of the most infamous of El Salvador's civil war. El Salvador will have to decide whether to extradite the nine to Spain. The men handed them
2 comments
Keep reading 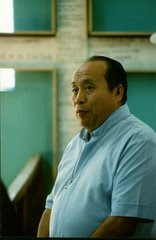 August 6 is celebrated in El Salvador as the feast day of the Divine Savior of the World, the patron saint of El Salvador. But for the Lutheran Church in El Salvador, it is also the anniversary of the date on which Medardo Gomez was installed as the only bishop this church has ever had. Today, August 6, 2011 marks the 25th anniversary of Bishop Gomez' installation, and the church will be celebrating with its own march through the streets of San Salvador. I have had the privilege to know Bishop Gomez for almost 10 years.   He is a steadfast voice for social justice in El Salvador.   His church serves the poorest communities in the country, and his work is rooted in Latin American liberation theology which he has expanded and adapted as a "theology of life."   During the civil war, he was abducted and tortured by death squads, and on the same day the Jesuits were massacred in 1989, Bishop Gomez narrowly escaped when troops arrived at his church with orders to capt
Post a Comment
Keep reading

August 03, 2011
The first week of August is a week of vacations in El Salvador, leading up to the August 6 celebration in San Salvador of the Divine Savior of the World.  It is a time for parades, religious processions, parties and trips to the beach. Each year, however, it is also a time when the rate of traffic accidents soars, and this year started with a particular tragedy.   A freight truck carrying 43 people to a Catholic youth gathering had a mechanical failure, rolled over and crashed killing 12 and leaving 30 others wounded.  So far during the vacation week which started last Saturday, another 7 people have died in traffic accidents for a total of 19 . The UN World Health Organization describes traffic accidents as a leading cause of preventable death and injury.  The WHO page on El Salvador is here  and shows statistics through 2007 regarding the death toll on El Salvador's roads.  But safety may be improving on El Salvador's roads.  There are current statistics on the El
3 comments
Keep reading
More posts