Showing posts from March, 2015
Show all

March 31, 2015
After almost a month of vote counting, you can see all the final results of El Salvador's March 1 elections here at the TSE website .   Two things are worth noting in my final post about those elections: the country is evenly split between left and right, and Nayib Bukele, not the FMLN, won the mayor's office in San Salvador. In the 2014, presidential elections, Salvador Sanchez Ceren and the FMLN defeated Norman Quijano and ARENA by only 6000 votes out of 3 million votes cast, a difference of 0.22%.   That even split continues to show itself in the votes cast in 2015.   In races for the National Assembly, ARENA had 38.77% of the vote and the FMLN had 37.28% of the votes.     When you include the normal alliances among parties, ARENA and its allies have 42 seats in the National Assembly.   The FMLN and its ally GANA also have 42 seats.     In the races for the Central American Parliament, ARENA and the FMLN each won 8 seats and the minor parties divide up the remaining 4 se
1 comment
Keep reading

US still only place Salvadoran war crimes have been adjudicated

March 28, 2015
Stanford  Professor Terry Karl  has an essay titled  El Salvador: Changing the U.S. Legal System but Can It Change Its Own?  in the new online periodical  Factum , founded by Salvadoran journalists Héctor Silva Ávalos and Orus Villacorta.  Professor Karl has long studied El Salvador's civil war and human rights issues and has testified as an expert in several trials of these issues in US courts. Prof. Karl highlights the  recent decision of the Board of Immigration Appeals  ruling that former Salvadoran Defense Minister Vides Casanova could be deported from the US for his responsibility for human rights abuses during the civil war: The Vides ruling is especially significant because it connects the legal doctrine of command responsibility, developed in the Nuremberg and Tokyo trials after World War II, to the ability to remove human rights abusers from the U.S. Command responsibility is demonstrated legally when three elements are present: 1) forces subordinate to a commander co
Post a Comment
Keep reading

Tens of thousands of Salvadorans dressed in white took to the streets today in a March for Life, Peace and Justice. The march had been called by the government and its National Council on Citizen Security and Social Peace.    It was supported by churches throughout the country who called for the faithful to join this demonstration for a more peaceful El Salvador.   The government numbered the marchers at half a million. Participating in a branch of the march which left from the Metropolitan Cathedral in San Salvador to the Plaza Salvador del Mundo, auxiliary archbishop Gregorio Rosa Chavez stated  “We are happy with the response of the people and the atmosphere the reigns in this demonstration of hope, of joy, and also of commitment." President Salvador Sanchez Ceren used the occasion to announce that his government would soon introduce a law for reinsertion of gang members into society and for prevention efforts aimed at those at risk. El Salvador's need for peace
1 comment
Keep reading

So who won the election anyways?

March 25, 2015
El Salvador's national elections were March 1, but we still don't know who won the final seat in the National Assembly.   Currently the parties have won the following seats in the 84 seat National Assembly: FMLN -- 31 deputies GANA -- 11 deputies  ARENA -- 34 deputies PCN -- 6 deputies PDC -- 1 deputy   The FMLN and GANA often vote together, and have 42, or half the deputies, but need 43 for a simple majority. ARENA, PCN and PDC often vote together, and they have now 41 deputies. The remaining seat is being disputed between ARENA, and CD (Democratic Change).   CD typically allies itself with the FMLN.   So the outcome of this seat will determine whether the left gains a majority in the National Assembly, or if the country has a legislature split evenly in half. The votes which will determine the outcome are from San Salvador department.  For the past week, the parties have been struggling over the scrutiny of tally sheets and ballots to determine the remaining de
2 comments
Keep reading 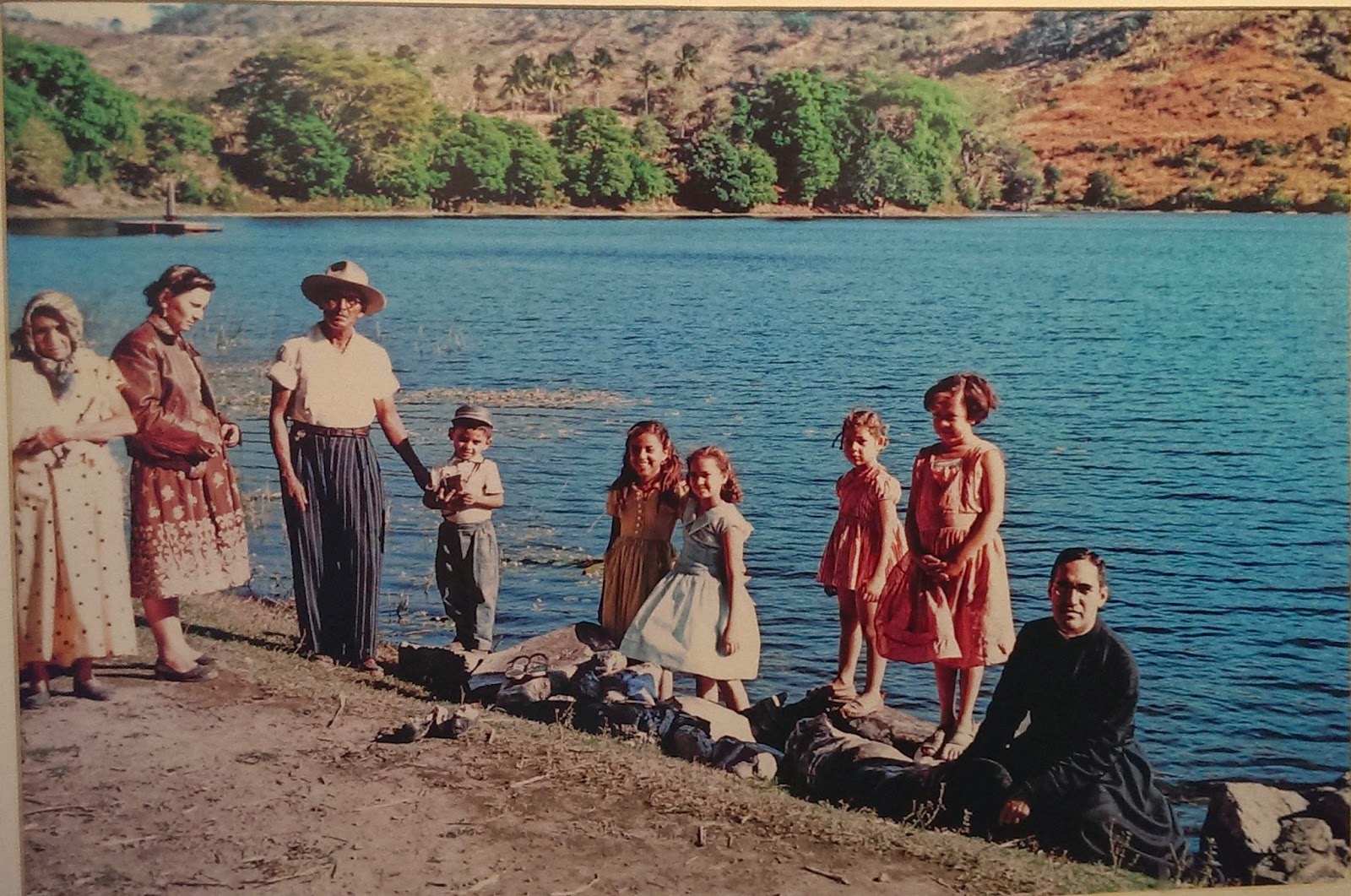 Today is the 35th anniversary of the March 24, 1980 assassination of Salvadoran archbishop Oscar Arnulfo Romero.   The day is being met with marches and commemorations throughout the week and throughout the country as El Salvador looks towards May 23 and the celebration of Romero's beatification by the Roman Catholic church. The image of Romero is everywhere in El Salvador, from a mural within the international airport which now bears his name, to the walls of houses in remote hamlets in the countryside.   It is evidence of how profound was the impact of this man of God who walked hand-in-hand with the oppressed and the poor in the country.  It was his commitment to justice rooted in faith which put him on the path to martyrdom at the hands of a death squad assassin. El Faro has published a photo gallery you can view of the varied images of Romero in today's El Salvador. The photo above is from a collection of personal photos belonging to Romero and now housed at th
1 comment
Keep reading

The confession of one of Rutilio Grande's killers 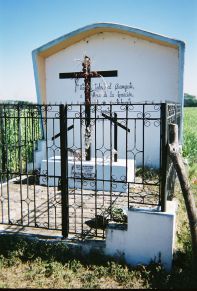 Memorial at the site of the assassination of Rutilio Grande The online periodical ContraPunto yesterday published an interview with Julio Sánchez , a member of El Salvador's National Guard, who admitted to his participation in the 1977 assassination of Father Rutilio Grande, a Jesuit priest.  Here is an English translation of a short portion of the interview: What happened on March 12, 1977, when they ambushed the Father Rutilio Grande?  "There were orders we received directly from the director of the National Guard (General Ramon Alfredo Alvarenga served as director general of the National Guard from 1975 to 1978).  We were selected as eight members of the guard; I was not in charge of the operation.  I think we were six or eight (members of the guard) that were selected to fulfill the mission."  Did you know who you were going to kill? - I asked him, looking in his eyes for an honest answer, Julio repeatedly moves his hands and head due to Parkinson's di
Post a Comment
Keep reading

March 12, 2015
There's a lot going on in El Salvador this week. Oscar Romero beatification - May 23 .   The announcement was made in El Salvador that the celebration of Oscar Romero's beatification by the Roman Catholic church will take place on May 23 in Plaza Salvador del Mundo in San Salvador.  The announcement was made by Archbishop Vincenzo Paglia, postulator of the Óscar Romero beatification cause at a press conference on Wednesday morning, sitting alongside the President of El Salvador, the Archbishop of San Salvador, and the Papal Nuncio to El Salvador.   Get all the details here at the Super Martyrio blog . Rutilio Grande anniversary .   Today is the 38th anniversary of the martyrdom of Father Rutilio Grande, S.J .  Rutilio Grande was a Jesuit priest working with poor campesinos in the area around El Paisnal, El Salvador. On March 12, 1977, while driving on the road between El Paisnal and Aguilares, unknown assassins killed Father Grande, as well as two of his campesino parishion
Post a Comment
Keep reading

March 08, 2015
A few recent articles on the blogs of NGOs operating in El Salvador illustrate some positives and negatives of agricultural policy in El Salvador.   On the blog of EcoViva appears a story titled  Farmer cooperatives, not Monsanto, supply El Salvador with seed , which focuses on the Salvadoran government's decision to source corn seed locally:  This week, the Ministry of Agriculture released a new round of contracts to provide seed to subsistence farmers nationwide through its Family Agriculture Program. Last year, over 560,000 family farmers across El Salvador planted corn and bean seed as part of the government’s efforts to revitalize small scale agriculture, and ensure food security in the rural marketplace. Drought conditions across the country made access to seed all the more vital for rural livelihoods, making the seed packets supplied through the government program the primary means for thousands of families to put food on the table.  In 2015, rural cooperatives and nati
Post a Comment
Keep reading

I think if there were a hashtag to describe the work of the Supreme Electoral Tribunal in El Salvador since Sunday's elections it would be #EpicFail.  Three days after the elections, no results have been announced, and a "final scrutiny" of the vote tally sheets is just beginning.  It might take as long as two weeks before there are results. From the TICO Times :  The delays are fueling suspicions and stoking harsh criticism toward the country’s voting authority, the Supreme Electoral Tribune (TSE)...  El Mundo, one of the country’s morning newspapers, wrote Tuesday in an editorial that the TSE had failed all tests regarding the vote count.  “Chaos…has reached such a level that not even when votes were counted by hand was there as much delay as there is now,” the paper wrote.  The editorial also criticized the electoral authorities for what it said was a lack of communication with the public regarding problems with the vote count. David Morales, El Salvador’s H
Post a Comment
Keep reading

Here is a round up of what we know about the results of Sunday's elections in El Salvador for mayors and legislators: The official computer system of the Supreme Electoral Tribunal (TSE) for compiling and disseminating preliminary results completely broke down.  The TSE has announced that it is giving up on the process of even having preliminary results.   The process of the final scrutiny of some 31,000 vote tally sheets (actas) will begin Tuesday afternoon in San Salvador.   That process could reportedly take two weeks. Although the TSE has not published any results, the major political parties, through their networks of vigilantes and poll workers at every polling table, have their own vote tallies.   Based on those tallies, we know who won the race for mayor in several cities after the losers conceded. The biggest prize was the capital San Salvador which was captured, as expected, by the FMLN's Nayib Bukele, the current mayor of Nuevo Cuscatlan.   ARENA and its
Post a Comment
Keep reading

March 02, 2015
Salvadorans are waking up this morning to find there are not yet any election results.   The Supreme Electoral Tribunal (TSE) finally announced at 2 in the morning, that a computer system for tabulating the results from each individual voting table had failed to work.   The TSE urged parties not to proclaim themselves the winners, although certain candidates did so anyways.  The TSE indicated that it would be uploading images of the vote tallies from each voting center onto the web, and that a final vote count would commence on Tuesday. The new voting process created lengthy delays in counting the votes during the night.   The number of candidates, cross-party voting and the ability to choose individual candidates rather than parties meant there was a lot to count, and vote counters who had never had to count votes in quite this fashion before.  The TSE indicated it had received approximately 135,000 out of 277,000 vote tallies (actas) by 2AM.   It was not immediately clear what per
Post a Comment
Keep reading

El Salvador is voting on Sunday March 1 for: 262 mayors 84 deputies to the National Assembly 20 deputies to the Central America Parliament (PARLACEN) There are 4.9 million eligible voters, voting at 1595 voting centers across the country, assisted by 278,125 poll workers, and watched by, 1800 international election observers 1900 Salvadoran election observers according to statistics from the  Supreme Electoral Tribunal (TSE) During election day,  I will be tweeting @TimMuth , and then check back to the blog to see the election results and analysis.
Post a Comment
Keep reading
More posts