Showing posts from April, 2009
Show all

A Safe City for Women

April 28, 2009
An article in the Christian Science Monitor's Global News Blog highlights efforts to make Suchitoto a city where violence against women is rare: SUCHITOTO, EL SALVADOR – Time seems to have stood still in the colonial town of Suchitoto, about 30 miles from El Salvador’s frenetic capital, with its quiet cobblestone streets and perfectly preserved architecture. But now its white-washed walls are adorned with a 21st-century message: “In this house we want a life without violence toward women.” The words, which are accompanied by a bird and flower, the symbol of Suchitoto, forms part of a campaign by the Feminist Collective for Local Development to “elevate societal rejection of domestic violence, and make it a subject we should all be worried about,” says local feminist activist Morena Herrera. It seems to have worked: The overall impression, reading the message on home after home – where women sweep their front porches and men gather in rocking chairs to talk on lazy afternoons – i
1 comment
Keep reading 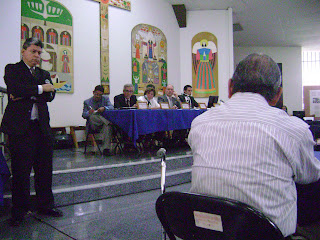 El Salvador's civil war ended seventeen years ago. Immediately after the war, a UN Truth Commission heard testimony about many crimes and atrocities committed during the war and issued its report, "From Madness to Hope" in 1993. Rather than institute the recommendations of the report for a process of national reconciliation and justice for the victims, the Salvadoran National Assembly quickly passed a law providing for amnesty for all events occurring during the war years. Since that time, any justice for the victims of human rights abuses during the 1970s and 1980s, has come only in forums outside of El Salvador itself. Civil trials for damages were brought in US courts by torture victims against Salvadoran officers, cases were brought before the Interamerican Commission for Human Rights, and now a proceeding has been commenced in Spain seeking to impose responsibility for the 1989 murders of the Jesuits. But El Salvador has not had any internal mechanism to al
3 comments
Keep reading

April 23, 2009
A new corruption scandal has implicated a senior ARENA official and cost the current Attorney General of El Salvador the chance at another term in office. Carlos Roberto Silva Pereira was arrested in southern California in October 2007. He had fled El Salvador where he faced corruption and money-laundering charges. He has been held by US authorities since that time and has not yet been extradited back to El Salvador. Silva is applying for political asylum in the US claiming his prosecution in El Salvador is politically motivated. Two weeks ago, the online periodical El Faro disclosed a tape recording of a conversation between Roberto Silva and Alfredo Tórrez, an ARENA party official: In that conversation, which took place in March 2008, the party's local director in San Salvador, Adolfo Tórrez, speaks with the former deputy Roberto Silva, offering to clear Silva and his wife in exchange for US$500,000. Torrez insinuates that he has already contacted judges and prosecutors
1 comment
Keep reading 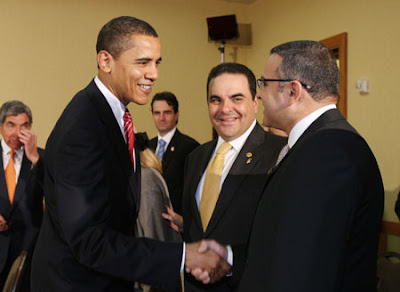 April 18, 2009
El Salvador's civil war ended 17 years ago. Today, the story of the conflict manages to provide a source of income for some families. The Christian Science Monitor Global News Blog looks at war tourism in the area of the Guazapa volcano: LA MORA, EL SALVADOR – Dormant volcanoes and desolate Pacific beaches are the standard choices for tourists to El Salvador. But now, former Marxist guerrillas are trying to carve their own niche in the industry – offering tours that retrace their steps in the brutal 12-year civil war that took 75,000 lives. Candelario Landaverde, who runs tours along the Guazapa volcano, where he fought for nearly a decade, says the idea is to preserve the national memory. “It is not because we cannot forgive,” he says, “but so that we never forget.” This part of the country, an hour’s drive from the capital, San Salvador, is better known as a day-trip destination for fresh air in the countryside. But these hills, particularly this volcano, were a stronghol
2 comments
Keep reading

April 15, 2009
El Salvador suffers the environmental effects of deforestation, but a model approach from Israel may provide a path for reversing the damage. An article on the GreenProphet.com blog describes cooperation between El Salvador and Israel on reforestation projects: Unsuccessful investments in coffee plantations, a long civil war in the 1980s and then a destructive earthquake in 2001, has left El Salvador with serious environmental degradation, making much of the country look like rubble. Rabbi Yerahmiel Barylka, director of the KKL-JNF [Keren Kayemeth LeIsrael - Jewish National Fund] Latin-American Desk, traveled to El Salvador last year to take part in a seminar to see what Israel could do. “Together with the manager, our Latin American representative at KKL, we went to El Salvador as part of a 40 person group, which included people from El Salvador who work with environmental protection and in the field of education,” says Barylka. As part of the initial meeting, a press conference w
8 comments
Keep reading

The Economy -- Worse than admitted

April 14, 2009
In the lead up to the March presidential election, El Salvador's government was not talking about a downturn in El Salvador's economy related to the world financial crisis. But as IPS reports , with the election over, the information is coming out: But shortly after voters awarded a victory to President-elect Mauricio Funes, who will take office on Jun. 1, the head of the Central Reserve Bank (BCR), Luz María de Portillo, and Eduardo Ayala, technical secretary at the Office of the Presidency, admitted otherwise. They reported a sharp decline in exports and tax revenue, as well as the loss of thousands of jobs over the past eight months. "We have been warning about this situation for a whole year," especially about the condition of the state coffers and the fall in GDP, but "unfortunately (the government) turned a deaf ear," Jorge Daboub, president of the Salvadoran Chamber of Trade and Industry (CCIES), told IPS. In his view, the "electoral climate&
4 comments
Keep reading

Fleeing the gangs or poverty hoping for a better life

April 13, 2009
The radio program LatinoUSA recently broadcast a story about a Salvadoran whom the US government wants to deport and the Colorado community which is fighting to keep him in the US: In the story of José Mendoza Turbín, a young immigrant who left El Salvador because his life was threatened by local gangs, his political asylum request was recently denied by ICE. And now, community leaders in Glenwood Springs, Colorado are petitioning ICE officials to use their immigration discretion and set aside his deportation order. You can listen to the broadcast here . Another immigrant's story is captured in this video interview produced by blogger Carlos Quiroz , in which an anonymous immigrant describes the details of his journey to enter the US illegally. Video .
3 comments
Keep reading

April 12, 2009
Thirty years ago, on Easter Sunday, Salvadoran archbishop Oscar Romero preached the following words: You that have so much social sensitivity, you that cannot stand this unjust situation in our land: fine – God has given you that sensitivity, and if you have a call to political activism, God be blessed. Develop it. But look: don’t waste that call; don’t waste that political and social sensitivity on earthly hatred, vengeance, and violence. Lift up your hearts. Look at the things above. APRIL 15, 1979 (EASTER SUNDAY) As El Salvador goes through its historic transition of power, these Easter words are still relevant. Quote taken from The Violence of Love, available for free download here .
Post a Comment
Keep reading

April 11, 2009
The Los Angeles Times website describes the new documentary by Christian Poveda, La Vida Loca ( The Crazy Life ) and uses it as the centerpiece for a discussion about the causes and solutions to the gang problem: That's a reality that Poveda feels a lot of Americans don’t know about and should. “Americans have to realize how much damage the U.S. has done to this region,” he says. Poveda, who lives in San Salvador and has worked as a photojournalist covering the country before, during and after the 12-year-long civil war that began in 1980, is talking from experience. The current situation in El Salvador is one of the less-inspiring examples of the long-standing social and economic ties between the United States and Latin American countries, he argues. Gangs were formed by Salvadorans living on the streets of Los Angeles in the 1980s. When the peace accords that ended the civil war were signed in El Salvador in the early 1990s, huge numbers of gang members returned to the coun
4 comments
Keep reading

The Economy -- El Salvador and its neighbors 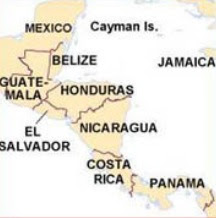 As part of my current series on economic topics, I've collected a series of comparative economic statistics for El Salvador and its neighbors in Central America. The source of these statistics is the CIA World Factbook which compiles these statistics and many, many more. The chart below compares the per capita GDP (gross domestic product) of these nations. This is the economic output of the country divided by its population and is a rough measure of the economic prosperity of a country. For this measure, GDP is measured on a "purchasing power parity" basis which is designed to allow comparisons among countries. For a greater explanation, you can read the definitions from the CIA World Factbook. (click on chart for a larger version) The statistics for the individual countries are set out below: El Salvador GDP $43.94 billion Per capita GDP $6,200 Population 7,185,218 * Growth rate 3.2% Costa Rica GDP $48.48 billion Per capita GDP $11,600 Population 4
7 comments
Keep reading 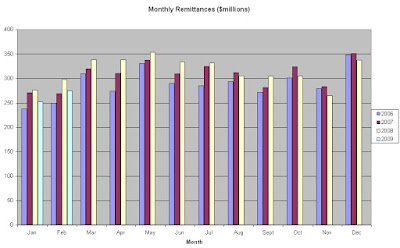 Remittances, the money Salvadorans abroad send back to family members in El Salvador, are falling as the economic downturn in the US and elsewhere impacts immigrant workers. The chart below was prepared from data maintained by El Salvador's Central Reserve Bank which tracks remittances on a monthly basis. (click on the image for a larger version). What the chart shows is that from 2006 through 2008, each year remittances grew. But starting in August 2008, remittances are no longer higher each month than the remittance amount in the same month one year earlier. For 6 of the 7 months from August 2008 though February 2009, remittances were less than the previous year. The decline over that period is some $81.5 million from the corresponding period or a decrease of almost 4%. This 4% decline represents a significant shift from the prior pattern of steadily increasing remittances. Since remittances have been perhaps the single greatest source of money to lift families in E
5 comments
Keep reading

The Economy -- Dollarization -- its potential benefits

April 01, 2009
Over the next few weeks, I will be devoting a greater percentage of blog posts to economic topics. The economy and the world financial crisis pose large challenges to the incoming administration of Mauricio Funes and the FMLN. Funes made many promises in the election campaign, but economic realities may impinge on how many of those he can fulfill. One unique factor about El Salvador's economy is dollarization. El Salvador abandoned its own currency at the beginning of this decade and only uses the US dollar now. An article from the Canadian paper the Globe and Mail makes the argument that dollarization has played an important role in promoting the stability and growth of the economy in El Salvador: El Salvador has no domestic (“sovereign”) currency and, hence, no monetary policy of any kind. Almost alone in the world, El Salvador has no central bank. Lucky El Salvador. This tiny country has used the U.S. dollar as its official currency for eight years – and has avoided mos
4 comments
Keep reading
More posts