Showing posts from January, 2014
Show all

Reading before the elections on Sunday

January 30, 2014
The English language press is paying attention to the elections in El Salvador.   Here's a sampling of some of what is being written. Reuters' article headline is El Salvador vote pits ex-rebel against gang-fighting rightist . The article is better than the headline. Former US Ambassador to El Salvador, William Walker, has an op ed piece in the New York Times entitled   Don't Fear El Salvador's Leftists .  I agree. In the San Francisco Chronicle, Hector Perla, Jr. writes that El Salvador vote should be decided by the people, not the US . The election is placed in its broader context within Latin America by the Tico Times in an article titled Leftist parties gaining ground as Costa Rica and El Salvador elections near . The AS/COA blog looks at the votes from those living abroad in First Expat votes for Costa Rica and El Salvador . In addition, a group of US-based solidarity organizations have an electin blog up and running at  http://2014electionsblog.wordpress
1 comment
Keep reading

Different rules for voting in the exterior?

January 27, 2014
The rules of El Salvador's Supreme Electoral Tribunal are very clear about the process of voting on election day.    The parties are not to campaign at voting places.   Party monitors at the polls cannot instruct voters on how to mark their ballot.   Voters should keep their ballot secret.   Using a camera to take a photo of how you marked your ballot is prohibited in order to prevent a form of vote buying. But as this video from La Prensa Grafica shows,  apparently those rules don't apply or at least are ignored, when it comes to the parties trying to round up votes from Salvadorans living outside of the country. Since only around 10,000 Salvadorans were registered to vote outside of El Salvador, this exterior vote is unlikely to make any difference in the outcome on February 2.   As of last week, only about 1500 ballots had been received from abroad.
2 comments
Keep reading

Everything you need to know about El Salvador's presidential election

January 23, 2014
Linda Garrett at the Center for Democracy in the Americas has compiled an excellent primer on the candidates and all the issues involved in the February 2 presidential election in El Salvador.   I could write my own, but it would not be nearly as complete.  Read hers here:   El Salvador Presidential Election Preview, 2014 .
1 comment
Keep reading

News round up from El Salvador

January 19, 2014
A round up of some news stories from El Salvador in the past week.   Last opinion polls before the election .    All the major polling organizations released polls in the past week.   The results of the polls vary significantly, but the general trend shows Salvador Sanchez Ceren from the FMLN with a comfortable lead over Norman Quijano from ARENA, but not enough to win in the first round.   Who will win in the second round is anyone's guess at this point. Record low temperatures hit parts of El Salvador .   A cold front pushed through El Salvador this week.   In Las Pilas, Chalatenango in El Salvador's northern mountains, the temperature dipped to 2.2 degrees celsius , 36 degrees Fahrenheit.       Commemoration of 22nd anniversary of the 1992 Peace Accords .   January 16 marked 22 years since the signing of the Peace Accords which marked the end of El Salvador's bloody civil war.   In an event to mark the anniversary, current vice president Salvador Sanchez C
Post a Comment
Keep reading 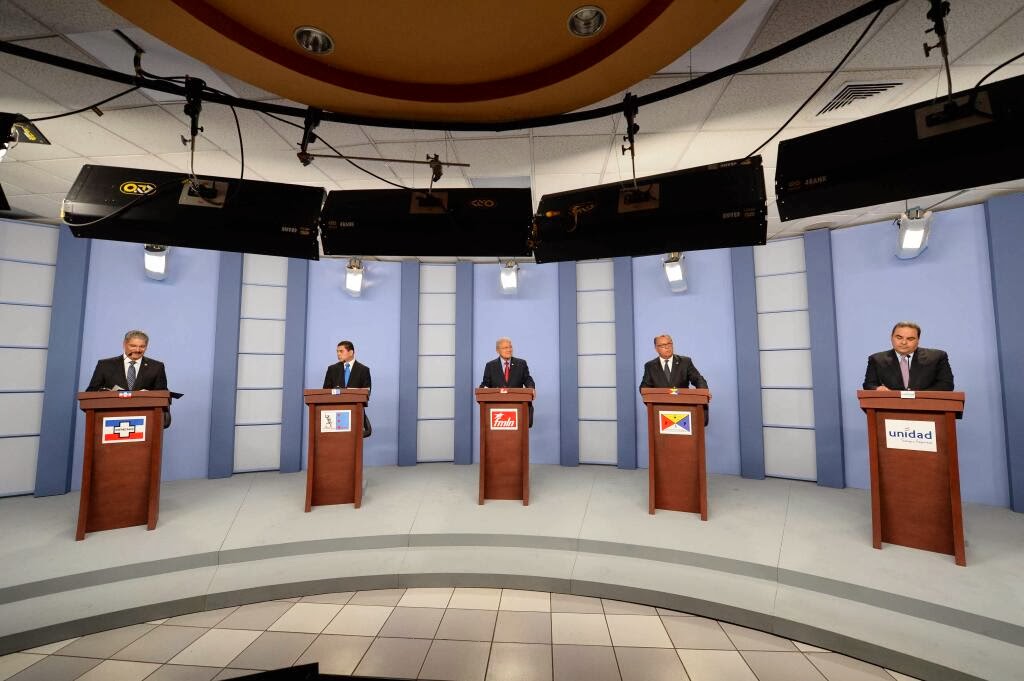 El Salvador held its first ever presidential debate Sunday night, broadcast live over radio and television in the country as well as streaming over the Internet.  The debate, sponsored by the association of Salvadoran broadcast media (ASDER) and the Supreme Electoral Tribunal (TSE), was moderated by Mexican journalist Armando Guzmán from Univsion and took place at the Fair and Convention Center (CIFCO) in San Salvador. The three leading presidential candidates Norman Quijano (ARENA), Salvador Sánchez Cerén (FMLN), and Antonio Saca (Unidad), were joined on the stage by two minor candidates, Óscar Lemus (FPS) and René Rodríguez Hurtado (PSP).  The debate had four rounds of questions, touching on the topics of education, citizen security, healthcare and the economy. The approaches of the three leading candidates were largely predictable.   Current vice president Salvador Sanchez Ceren stressed the policies of the current FMLN government which are popular such as school packet
2 comments
Keep reading

The final month of campaigning

January 08, 2014
With El Salvador's presidential election approaching on February 2, the rhetoric and the interest in El Salvador and elsewhere is starting to crest.  Tony Saca, Norman Quijano, and Salvador Sánchez Cerén are criss-crossing the country searching for votes and filling social media channels with their campaign themes.  There have not been any recent opinion polls released, so it is hard to gauge which way things might be moving.   You can check my t racking chart to see how things looked in various polls throughout 2013.  The average of four polls released in December showed Salvador Sánchez Cerén with 34%, Norman Quijano with 32% and Tony Saca trailing significantly with 16%.   There is still a large undeclared group of voters.   This weekend on January 12, there will be a televised debate of the presidential candidates at 7 p.m. El Salvador time.   It's a first for the country, but I don't know how much impact it will have.     PulsAmerica has a short summary
3 comments
Keep reading 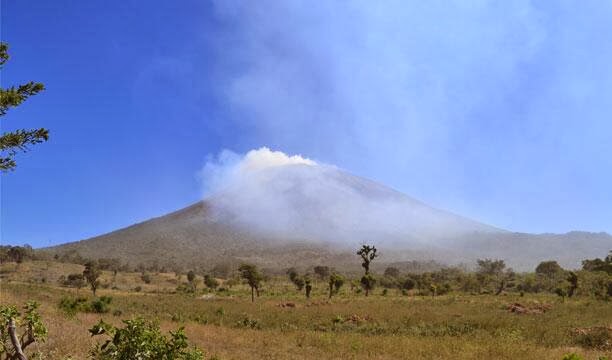 Although the Chaparrastique volcano in San Miguel has not exploded again since last Sunday, it continues to cause problems for the people living around it.  The volcano continues giving off smoke with high levels of sulphur dioxide, which is potentially dangerous to health.  The best source of updates continues to be the MARN website and twitter feed .  You can read more about volcanic sulphur dioxide at this link . As a consequence, authorities evacuated as many as three thousand additional people in recent days and are still advising people not to return home until the danger subsides.   There was a report that one 70 year old man was hospitalized from breathing the smoke after he returned to the house from which he had earlier been evacuated.   From people in the area, I have heard that evacuated people are obviously concerned about their animals and other possessions at homes they left.   Laborers who might otherwise be harvesting coffee on the slopes of the volcano are o
1 comment
Keep reading

January 03, 2014
The eruption of the volcano in San Miguel postponed the normal year end stories in the blog.   I'll keep updating the situation with the volcano,  but want to share with everyone this guest post from our good friend Carlos Colorado: Top 10 Religious Stories for 2013 A new CID-Gallup poll out at the end of the year confirmed—yet again—what has been the consistent story in El Salvador, in Latin America, and throughout the world, about the growing encroachment of secularism and the waning influence of religion generally and the Roman Catholic Church in particular. In El Salvador, other Christian denominations—especially Evangelicals—have benefitted directly from the Catholic Church’s decline. Archbishop Jose Luis Escobar was candid in recognizing his Church’s situation: “Twenty five years ago,” he acknowledged, “the percentage of Catholics was very high, above 90%. Now it borders on maybe 60 or 70%.” That said, 60 or 70% is still a majority and, in politics, 60 or 70% counts as
Post a Comment
Keep reading
More posts