Showing posts from April, 2019
Show all

Attacks on police and soldiers

April 29, 2019
In recent days. police and soldiers have been murdered in El Salvador at an alarming rate. Most recently we saw this yesterday, Sunday, April 28, when two police officers and three soldiers were killed in separate incidents.  The assassins all attacked off duty security forces as three of the five victims were killed at separate soccer fields as they played on their day off and the two others were also with family or friends. The murders bring the total of security forces killed in 2019 to 25, with 17 police and 8 soldiers killed.  Director of the National Civilian Police, Howard Cotto, asserted that the murders were ordered by leaders of MS-13. After the first murder surfaced yesterday, El Salvador's incoming president, Nayib Bukele, tweeted : ¡Otro policía asesinado hoy! Días de hasta 25 muertos. Con la crisis de medicamentos, agua, luz, FODES, sindicatos express, nuevas contrataciones, dejar vacías las arcas públicas, etc. No quisiera pensar que esta sea otra “bomba
Post a Comment
Keep reading

Migration from El Salvador has doubled in past 6 months 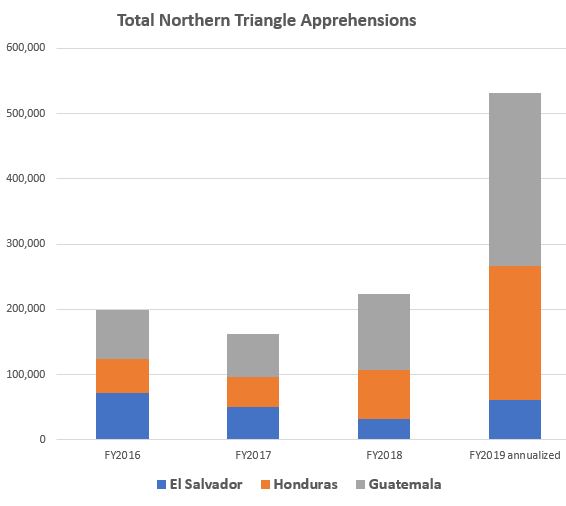 Only four months ago, the government of El Salvador responded to Trump administration criticism on migration by stating that El Salvador had managed to reduce migration by 60%.    But starting in late 2018, all of that reduction in migration has vanished, and today large numbers of Salvadorans continue to flow north, fleeing violence or poverty, with caravans or human smuggler coyotes. According to US Customs and Border Protection statistics , in the 12 months ended September 30, 2018, approximately 31,000 Salvadorans were apprehended crossing the US border outside of official entry points.  This was down from 71,000 during the same time period in 2016.  Now, however, in the six month period from October 1, 2018 until March 31, 2019, there have been 30,862 apprehensions, or almost as many as the entire year before.  In other words, the rate of migration appears to have doubled in the past six months.  In addition, approximately 1,750 additional Salvadorans crossed the US border at o
2 comments
Keep reading

April 24, 2019
Migration from El Salvador towards the US has surged in recent months as measured by the number of Salvadorans apprehended at the US border .  To get to that border, migrants must cross Mexico where public attitudes and government policy have been changing rapidly, often to the detriment of migrants.  Perils from Mexican immigration authorities were highlighted in a recent raid by police on a migrant caravan.   The raid was observed by AP reporters who described the scene in an article titled Migrants fearful after hundreds arrested in Mexico raid :  Mexican immigration authorities said 371 people were detained Monday in what was the largest single raid so far on a migrant caravan since the groups started moving through the country last year.  The once large caravan of about 3,000 people was essentially broken up by the raid, as migrants fled into the hills, took refuge at shelters and churches or hopped passing freight trains. A brave few groups straggled along the highways, bu
Post a Comment
Keep reading

April 23, 2019
Semana Santa (Holy Week) is a time of vacations, party and festivals in El Salvador.   The beaches and families gather.   But this year, the week was marked by a bloody total of accidental and intentional deaths. The authorities released today the tally of accident deaths occurring during the period of Semana Santa.  52 people died in accidents -- 44 in traffic accidents and 8 by drowning.  This represented a 24% increase over the prior year.   The police chief Howard Cotto listed cars which traveled into the lanes of oncoming traffic and distracted drivers as the primary source of fatal accidents. There was also a surge in homicides during Semana Santa with 116 killings recorded.  Cotto asserted that 78% of the homicides were gang-related.   There were at least 13 shoot-outs between gangs and police.   Good Friday was the bloodiest day with 20 homicides. This surge in gang violence comes after four months of improvement in homicide rates, and shows how intractable the epidemic
1 comment
Keep reading

Ongoing epidemic of gender based violence

April 17, 2019
Violence directed at women and girls in El Salvador is an ongoing epidemic.  The levels of gender-based violence are rooted in structures and attitudes and the simple fact that men can get away with it. The Guardian reported today on alarming statistics of sexual violence in the country: Rates of sexual violence in El Salvador rose by a third last year, with the majority of cases involving teenage girls.  More than 60% of the 4,304 cases of sexual violence recorded in 2018 involved 12- to 17-year-olds, according to a report published this week by the Organisation of Salvadoran Women for Peace (Ormusa).  About 20% of the 560 cases of missing women last year were also among this age group.  In 2017, the number of sexual violence cases was 3,290. Overall the country has witnessed a 13% increase in number of instances of violence against women, from 5,781 in 2017 to 6,673 last year. And although femicides have declined (along with the general murder rate), the rates in El Salvad
Post a Comment
Keep reading 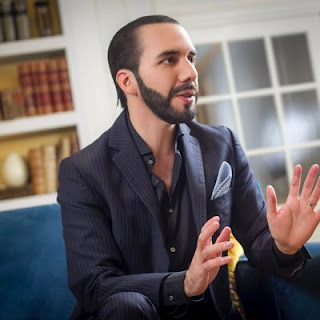 Nayib Bukele Twitter profile pic President-elect Nayib Bukele was a social media candidate for office with legions of followers on Twitter and Facebook.   Now that he is preparing to take office, Bukele has continued to use Twitter as his primary method of communicating with the country.   You can always check out what he has to say @NayibBukele .    After Donald Trump (perhaps the most infamous presidential Twitter user) announced on Twitter and elsewhere that he was cutting off more than $500 million in US aid to El Salvador, Honduras and Guatemala, Bukele's response in a tweet was muted: Sobre el anuncio del Presidente @realDonaldTrump de suspender la ayuda a El Salvador, esperamos que esta se reanude e incluso incremente al entrar el nuevo Gobierno. Hasta ahora, todos nuestros proyectos han sido acompañados y hay mucho entusiasmo por el cambio en nuestro país. — Nayib Bukele (@nayibbukele) March 31, 2019 Regarding the announcement of President @realDonaldTrump t
Post a Comment
Keep reading
More posts