Showing posts from May, 2014
Show all

Anti-mining movement keeps up the pressure

May 29, 2014
With the coming start of a new presidential administration in El Salvador, the anti-mining movement is renewing its demands that the current ad hoc moratorium on metallic mining in the country be enacted into law.   As Edgar Ayala at IPS explains : Two years ago, environmental organisations grouped in the Mesa Nacional contra la Minería – a national umbrella group against mining – presented a proposed bill in Congress to prohibit mining because of the negative effects on health and the environment.  If it is approved, El Salvador would be following the lead of Costa Rica, which passed a law banning open pit mining in 2010. Panama approved a similar ban two years later, but only on indigenous lands in the western provinces of Bocas del Toro, Chiriquí and Veraguas.  Social organisations believe another bill, presented in 2012 by El Salvador’s Environment Ministry, falls short because it would merely suspend mining activity.  “We don’t support the idea of a moratorium, because it
Post a Comment
Keep reading

Prosecution of ex-president Flores to proceed in secret

May 27, 2014
The judge in El Salvador who is in charge of the corruption proceedings against ex-president Francisco Flores has decided that the case will not be made public.  From the Free Press Journal : A judge has imposed strict privacy on proceedings involving Salvadoran ex-president Francisco Flores’s alleged misappropriation of USD 15.3 million donated by Taiwan.  Judge Levis Italmir Orellana ordered that the case proceed in private behind closed doors, and “parties to the case no longer will be able to comment publicly,” a court source told AFP on condition of anonymity. The proceedings later can be made public again, but only if prosecutors make an appeal, and succeed, the source added. That's a step backwards in the fight for transparency in El Salvador's institutions.
Post a Comment
Keep reading

Murders surge in weeks before transition of government.

May 24, 2014
#493432787 / gettyimages.com Twenty-nine people were murdered in El Salvador yesterday according to authorities in all regions of the country.  The murders included an  attack on an intercity bus  yesterday which left 6 dead.   The country's Attorney General Luis Martinez blamed the surge in murderous violence on a plan by the Barrio 18 gang.   He asserted that this was part of a plan to pressure the incoming government which takes office on June 1. The National Civilian Police declared an emergency and canceled all leave for its personnel.  The PNC reported that it had received threats that there would be a wave of attacks in the coming days. The death toll is reaching pre-truce levels.  A "tregua" or truce between El Salvador's leading gangs in March 2012 led to an immediate reduction in homicide rates of more than 50%.   But now  280 persons in El Salvador have been murdered during the month of May so far, an increase of 64% over May 2013.  The avera
Post a Comment
Keep reading

May 22, 2014
The University of Central America Institute for Public Opinion released an opinion poll  yesterday describing Salvadorans' view of their outgoing president, Mauricio Funes.   Funes was the country's first ever president elected from the left wing FMLN.  He will be succeeded by Salvador Sanchez Ceren, his vice president and minister of education. The government of Funes received an average grade of 6.59 on a 10 point scale, higher than any previous right wing ARENA administration at the conclusion of its term. The achievement most cited by respondents was the new program which provided school packets, uniforms and shoes to all public school students. The primary failure of the Funes' administration was its failure to address the level of criminal activity in the county. Half of all respondents believed that the situation in the country will improve under the incoming administration of Salvador Sanchez Ceren.
1 comment
Keep reading

Romero sainthood coming soon? or not?

May 20, 2014
Countless people in Latin America know that assassinated archbishop Oscar Romero is a saint, but the official Roman Catholic church is still a little slow in catching up to the opinion of the faithful.    Our good friend Polycarpio at the Super Martyrio blog , as always, keeps us up to date with the latest scoop on the canonization process: The Archbishop of San Salvador, Msg. José Luis Escobar Alas, confirmed this Sunday that in his May 9 audience with Pope Francis, he and three Salvadoran Bishops accompanying him discussed the canonization process of Archbishop Óscar A. Romero with the Pontiff. Archbishop Alas described Pope Francis as happy and enthusiastic about the cause and he confirmed the fact, first reported here , that the Salvadorans are inviting the Holy Father to El Salvador for the canonization. “What we are thinking, what we are asking the Lord,” Msgr. Alas said, “is the prompt canonization of Monseñor Romero, and that Pope Francis come and that it will be here” [in
1 comment
Keep reading 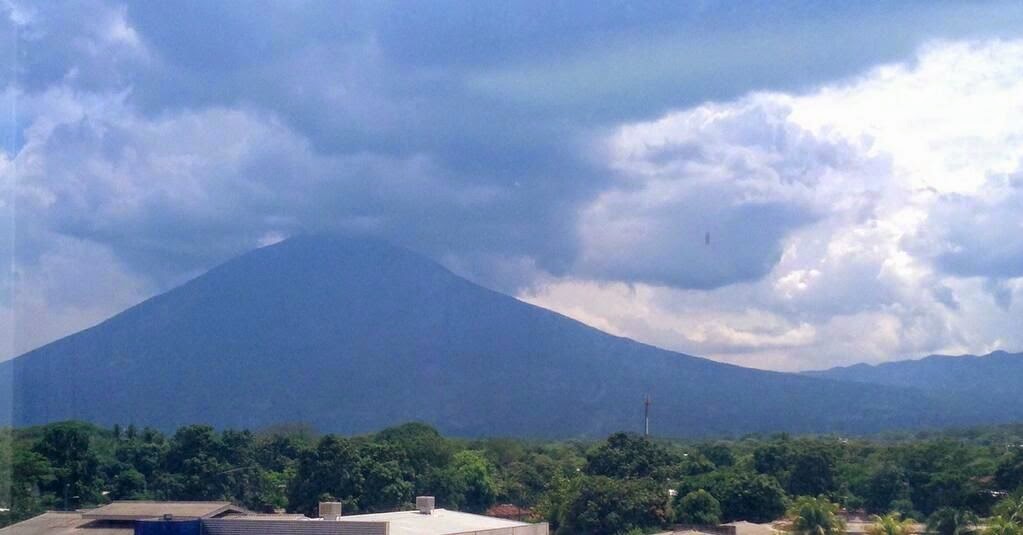 The Chaparrastique volcano near San Miguel has shown significant new activity since Sunday.  Officials at MARN stated there was a " high probability " of a new eruption.  The high level of internal seismic activity, with some smoke mixed with ash coming form the crater, prompted authorities to take preventive measures.   They have ordered the evacuation of more than 1000 persons living within a radius of 5 km of the crater and suspended classes at nearby schools for 72 hours.  There are reports of many people being unwilling to leave their homes and evacuate. The level of seismic activity remains strong on Tuesday morning. Go here for a gallery of tweeted images of the volcano during the day on Monday. The volcano began its most recent period of activity last December 28, with an explosion of ash and smoke . Check my twitter feed   @TimMuth for updates. Live streaming video from MARN monitoring camera:
1 comment
Keep reading

May 18, 2014
Food sovereignty is an important issue in El Salvador.  It is the issue of whether the country, its farmers and its consumers can be largely self-sufficient in the area of basic foodstuffs and not dependent on imports and the whims of world markets.   One area where the discussion of food sovereignty is focused is corn -- the basic food staple of El Salvador. On the EcoViva blog, there is a detailed discussion of this topic and pressure being exerted by the US in a post titled  Seeds of Food Sovereignty Grow in the Shadow of CAFTA .   Here is an excerpt: The Family Agriculture Program is part of the left-leaning Salvadoran government’s strategy to promote food sovereignty in a country that has a long history of food insecurity, social conflict, and ecological degradation related to industrial agriculture. It has strengthened the technical ability and capacity of local agricultural cooperatives to cultivate seeds and food so crucial for the food security of the nation and the rura
1 comment
Keep reading

What happened in April in El Salvador

May 09, 2014
I wasn't blogging during much of the month of April, but you can catch up on what was going on by reading Linda Garret's April 2014 El Salvador Update from Center For Democracy in the Americas.  The report covers politics including the presidential transition, security, the economy and human rights.
Post a Comment
Keep reading

The control of human smuggling through northern Mexico

May 05, 2014
If you want English language news coverage of narco-trafficking or the gangs of El Salvador, there is only one place to go, the InSightCrime website .  Its most recent article is a collaboration with El Faro reporting on the 2010 massacre of 72 migrants in Tamaulipas, Mexico.  The article is titled  How the Zetas Tamed Central America's 'Coyotes' . From the introduction: Why did the Zetas, in two massacres, murder 268 people, the majority Central American, Mexican and South American migrants? The history of some of the Salvadorans who died in these bloodbaths in northern Mexico, the voice of one of El Salvador's coyote patriarchs and some documents all indicate that everything was part of a process of making the coyotes understand that they either had to pay or could not pass. Not them, nor their migrants. The rules have changed. The coyotes are no longer the roughest guys on the road. Read the entire article here . Despite the perils of the journey, each day d
Post a Comment
Keep reading

May 04, 2014
#108042433 / gettyimages.com There is growing international attention being paid to an epidemic of chronic kidney disease which is killing men of prime working age in El Salvador and other Central American countries.   The World Health Organization reported last year : Central American countries have reported a growing number of cases of chronic kidney disease that are not related to traditional causes such as diabetes and hypertension. Cases are concentrated among young men living in low-income agricultural communities along the Pacific coast. The disease appears to be associated with factors including environmental contaminants (most likely agrochemicals) and occupational risks (poor working conditions and insufficient water intake while working in high temperatures), among others.  Precise data on cases is difficult to collect, but experts believe that thousands of Central Americans have died from the disease over the past 10 years, most of them in Nicaragua and E
2 comments
Keep reading

El Salvador's prosecutors are seeking a warrant for the arrest of Francisco Flores, who served as the country's president from 1999 to 2004.   From the New York Times : Former President Francisco Flores will face embezzlement and other corruption charges related to what prosecutors said Wednesday was the misappropriation of at least $5.3 million in loans from Taiwan during his tenure, from 1999 to 2004. The country’s chief prosecutor, Luis Martínez, told a television interviewer that charges had been filed in court against Mr. Flores, who has been summoned to a court hearing on Friday. He has not been seen publicly in several months, but in a hearing in January called by the nation’s Congress, which is also investigating him, he denied any wrongdoing. President Mauricio Funes has said Mr. Flores received $10 million in donations in the final months of his term without accounting for them. The AP has additional information about the charges:  Flores also allegedly mismana
1 comment
Keep reading
More posts