Showing posts from April, 2020
Show all

An overview of COVID-19 developments in El Salvador through the end of April. Confirmed cases of COVID-19 on El Salvador have been increasing at a steady rate.   For the past week, the country has been reporting an average of 21 new confirmed cases per day and reporting that it is testing an average of  1239 persons per day.  There have been 9 deaths officially linked to the virus. It is clear that the strict measures imposed by the Bukele government have had the effect of delaying for a month or more growth in community transmission in the disease.  So far this has achieved the primary goal of such a lock-down -- the healthcare system has had time to prepare and develop capabilities to respond to an eventual wave of COVID-19 cases. Now at the end of April there have been local cases confirmed in every department of the country.  Not surprisingly, the capital city of San Salvador has the most cases (44).  Increasing cases in the coming days and weeks will determine if the
2 comments
Keep reading 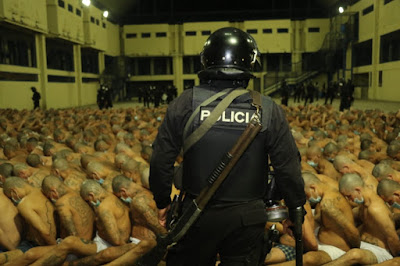 During January through March of this year, the main headline about gang activity in El Salvador was the ongoing decline in the homicide rate to post-civil war lows.   A daily average homicide rate of higher than 10 per day prior to 2019 had fallen to less than 3 per day by the end of this March.   The Bukele government pointed to these statistics as proof of the wisdom of its "Territorial Control Plan."  The other gang-related headline dealt with reports that the gangs were actually enforcing the government's COVID-19 stay at home order within their territories. But suddenly this weekend, something changed. 60 people were murdered in different locations all across El Salvador on Friday through Sunday, a number more than 7 times higher than the total deaths in El Salvador from COVID-19.  The reasons for the surge in homicidal violence were unclear, but the government of Nayib Bukele responded harshly, led by presidential tweets . Asserting that the gangs are
Post a Comment
Keep reading 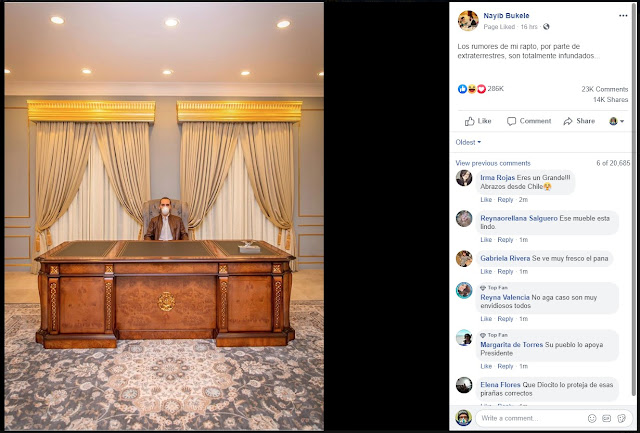 For a few weeks Nayib Bukele has been governing El Salvador from the cybersphere.   He has issued orders to government ministers, ordered the military quarantine of an entire city, put out nightly numbers on the progress of the epidemic and pressured the Legislative Assembly to adopt state of emergency measures, all by presidential tweet. Yet Bukele has not been seen in public since at least April 10.  This has led to a number of rumors circulating on social media that he might be out of the country.   The most prominent rumor , promoted by former president and now fugitive from corruption charges Mauricio Funes, is that Bukele has been traveling Florida while the family seeks medical care for his daughter. A few days ago Bukele spoke out to deny the rumors.  He pointed to his recent veto of legislative measures signed with ink and stamped with his official seal. ¿Pero como pude vetar un decreto con mi puño y letra, si dicen que estoy en Miami? 🤔 https://t.co/AWL6cSyxrB — Nay
2 comments
Keep reading 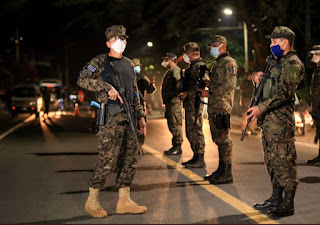 Over the past weekend, the town of Puerto La Libertad received a punishment from the president of El Salvador, Nayib Bukele.   In a tweet , he ordered the city to be cordoned off by the military with no one allowed to enter or leave.   Residents were confined to their houses without permission to leave even to buy food or medicine. The military blocked all access to the city, and patrolled it wearing masks and toting semi-automatic weapons.   Although the national stay-at-home order permits one member of each household to leave the house to purchase food and medicine and permits workers involved in the provision of food and groceries to work in that essential activity, all was shut down in La Libertad. The blockade of La Libertad lasted for 48 hours.  The lockdown was apparently prompted by a video circulating on social media which showed various resident of the town strolling the streets in violation of the nationwide stay-at-home order ("cuarentena domiciliar").  Bu
1 comment
Keep reading

April 16, 2020
By Salvador Samayoa [Adapted from a column published in El Diario de Hoy on April 12,  2020, published here with permission]. The Legislative Assembly recently passed a decree which temporarily restricts human rights. The deputies of the FMLN party, who did not vote in favor of it, and the deputies who voted to make changes in it, wanted to insure that people who were detained for being on the roads would be taken to their homes, and not to police stations or quarantine centers. This was a laudable purpose, and in tune with the decision of the Constitutional Chamber of the Supreme Court. But what we have seen since its approval on March 14 is that the president has challenged and contradicted the letter and spirit of this decree, and has completely ignored the authority of the judiciary.  Since he has shown that he is unwilling to govern within limits, and with checks and balances, we should not extend the extraordinary powers that were given to him in the two decrees. Such po
2 comments
Keep reading

April 16, 2020
In a dangerous move towards authoritarianism and a rejection of constitutional order, El Salvador's president Nayib Bukele last night went on a twitter rampage to declare that his government will not comply with rulings of the Constitutional Chamber of El Salvador's Supreme Judicial Court.   The conflict arose out of a series of rulings by the Chamber which have rejected extremes of Bukele's measures against the novel coronavirus, especially the domestic quarantine, or stay at home order.    The Chamber has ruled that Bukele exceeded his authority as he has been ruling by decree without laws passed by the Legislative Assembly supporting those actions.  The Chamber declared that persons found outside their houses cannot be arrested and carried off to quarantine centers if they are not symptomatic; the police cannot impound cars of persons who violated the quarantine; the government must have a plan to allow Salvadorans stranded abroad to return home. Bukele's twe
5 comments
Keep reading 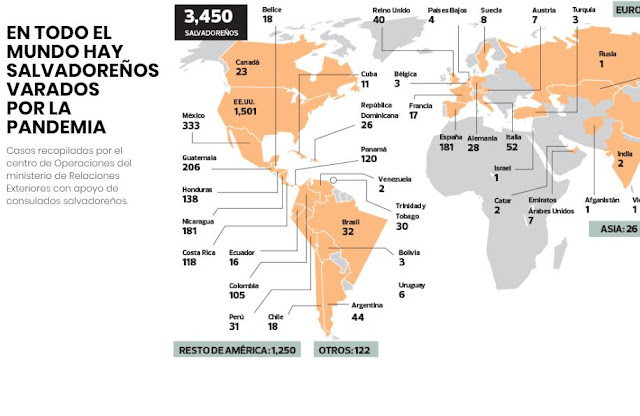 As a US citizen registered with the US embassy in EL Salvador, I received an email this evening which informed me that:  As of April 14, the U.S. Embassy in El Salvador has assisted 3,792 U.S. citizens and Lawful Permanent Residents to return to the United States through humanitarian and evacuation flights.  Two additional humanitarian flights with an estimated 358 passengers are scheduled through April 19.  Persons returning to the US from El Salvador are not subject to any particular quarantine procedure and are free to return to their homes. The same cannot be said for Salvadorans abroad who are trying to return to El Salvador.  Since March 18, El Salvador's airport has been closed to international passenger flights even if they are only carrying Salvadoran citizens.   The airport was closed via a  tweet  by president Bukele with only a few hours warning.   By one count, published by El Diario de Hoy , the closure has left 3450 Salvadorans stranded around the world, tr
Post a Comment
Keep reading 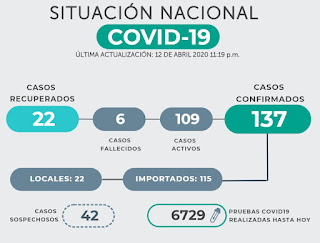 Easter Sunday in El Salvador concluded a Holy Week which normally would have seen beaches and tourist centers, bars and restaurants, overflowing with people on vacations. Instead, bars and restaurants were shuttered, no salt carpets covered streets for Semana Santa processions, and  beaches were deserted except for a few soldiers or police patrolling with automatic weapons and face masks.   #SurfCity was #SurfCityAbandoned last week. The number of COVID-19 deaths through Sunday, April 12 in the country stood at six, with 137 confirmed cases and another 42 suspected cases.   Perhaps the most important statistic is the 22 cases which the government labels as "local," meaning persons who developed symptoms but had not traveled outside of the country in the recent past.  This could mean that there is now "community transmission" of the disease, and the virus is circulating in the population outside of the quarantine centers.   The test of Nayib Bukele's very stri
Post a Comment
Keep reading

April 03, 2020
The number of confirmed COVID-19 cases in El Salvador has continued to grow.   As of the time of this post, the total is 46.  There have also now been two deaths from the virus.  Real time updates on confirmed cases and deaths are available here .  Part of the tragedy of this pandemic is that family members and other mourners are prohibited from attending the burial of those who perish from the disease. The primary response of the Salvadoran government to the pandemic continues to be a nationwide home quarantine  to avoid transmission of the virus and to give the government time to build up its capacity to respond to a the approaching health system crisis.  Of course the quarantine requires a means to support the millions of poor Salvadorans in the informal economy, who don't eat if they can't work.  The government's plan is a subsidy payment of $300 per household, while at the same time suspending their obligations to pay utilities, mortgages, loans and taxes.  The $300
Post a Comment
Keep reading
More posts