Showing posts from May, 2013
Show all

The case of Beatriz resolves

May 30, 2013
El Salvador has one of the strictest abortion laws in the world, allowing no exceptions for rape, incest or the health of the mother.   Mothers can be, and are, sent to prison for as many as 30 years for having an abortion.  El Salvador's Supreme Court refused yesterday to vary from that strict law in the case of Beatriz,  a woman who needs to terminate her pregnancy to save her own life.   But her life may still be saved, as this AP report in the Miami Herald describes:    A seriously ill Salvadoran woman whose struggle to get a medical abortion drew international attention received permission on Thursday to end the troubled pregnancy with a cesarean section.  El Salvador's Health Minister on Thursday approved the C-section for the 22-year-old woman suffering from kidney failure and lupus, a day after the Supreme Court ruled that she could not have an abortion despite her lawyers' appeal that the pregnancy was life-threatening.  Ultrasound images indicate that her
Post a Comment
Keep reading

2014 elections are a three way race

May 27, 2013
According to the recently released CIOPS/UTEC poll , the leading presidential candidates have very similar levels of support in the country.   When asked which party/candidate respondents would vote for, the results were: ARENA -- Norman Quijano -- 29.5% FMLN -- Salvador Sanchez Ceren -- 28.5% UNIDAD -- Tony Saca -- 23.4% But another poll question gives a little more insight into these results.  Respondents were asked if they had a favorable or unfavorable opinion of each of the candidates: NORMAN QUIJANO     Favorable 61.2%     Unfavorable 31.7% SALVADOR SANCHEZ CEREN      Favorable 38.3%      Unfavorable 53.6% TONY SACA      Favorable 61.9%      Unfavorable 31.5% At this point, I wouldn't want to forecast who will win between Saca and Quijano.   Quijano currently has a lead that reflects the traditional ARENA party faithful, but his lead is slipping.   Saca's support is growing rapidly as the Saca advertising and campaign machine gets into full gear.   Sanch
Post a Comment
Keep reading

May 25, 2013
A look at the websites for international development agencies, shows a great deal of attention being paid to public-private partnerships. In El Salvador, a  public private partnership law (the "P3 Law") supported by the Funes administration and the United States, would create a legal framework allow an increased use of such partnerships.  The National Assembly just passed the law on a unanimous 84-0 vote. What is a sometimes known as PPP or 3P, public-private partnerships can take a variety of forms. At its simplest, the government can hire a private contractor to perform a task which might otherwise be performed by government employees. For example, the government could hire a private contractor to build a highway rather than using Government employees to build the highway. The deals can grow increasingly more complex with the private entity making on more and more functions which are traditionally performed by government entities with public employees. An example of thi
Post a Comment
Keep reading 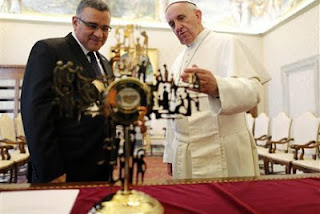 Salvadoran president Mauricio Funes visited Pope Francis at the Vatican today where they talked about the possible canonization of Oscar Romero. Our friend Polycarpio at the SuperMartyrio blog as always has complete coverage : Pope Francis received Salvadoran President Mauricio Funes in a private audience in which they discussed Archbishop Oscar A. Romero’s canonization cause. The Salvadoran president gave the Pope a reliquary containing a piece of garment that Msgr. Romero was wearing when he was assassinated. At the center of the garment, clearly visible, is a bloodstain. The reliquary monstrance is in the shape of a cross, with the arms depicting stylized human figures, representing the participation of the people of God in the death of his bishop. The case is the work of the Sisters of Divine Providence Hospital in the chapel where Romero was killed.  The President pointed out among other things that he was a pupil of the Salvadoran Jesuit Father Rutilio Grande, who
1 comment
Keep reading

May 22, 2013
President Mauricio Funes complete his fourth year in office on June 1.   A poll from the Universidad Tecnológica  asked Salvadorans how the president was doing. On a scale of 1 to 10, respondents gave Funes a grade of 6.5.    Almost 52% agreed with the statements that Funes' actions were focused on addressing the needs of the poorest members of Salvadoran society.    When asked who president Funes' decisions had favored, 34.2% said the people, 27.0% said Funes himself, 12.7% said "the Left", 3.5% said "the Right," and 8.8%  said the business sector. One interesting question is how much Funes' favorable approval rating will help the chances of his vice president, Salvador Sanchez Ceren in his run for president in 2014.   They have not really been seen as part of the same team, despite being part of the same political party.   I can't think of the last time they made a public appearance together.
Post a Comment
Keep reading

May 19, 2013
There was a lot of reaction over the weekend to the news that the Constitutional Chamber of the Supreme Court had ruled that the Minister of Public Security and the Director of the National Civilian Police (PNC) were both named invalidly because both were ex-military officers. President Mauricio Funes indicated in his weekly radio call-in show that he would comply with the ruling of the Constitutional Chamber.  While he criticized the judges for having an anti-military philosophy, he said that democratic order required that he comply with the ruling whether he agreed with it or not. Former president, and current presidential candidate, Tony Saca applauded Funes' decision to promptly comply with the decision as the appropriate one and indicated agreement with the court's ruling. Vicepresident, and current presidential candidate, Salvador Sanchez Ceren, stated that the court's ruling would complicate the public security policies of the country.    Without directly c
Post a Comment
Keep reading

Constitutional Chamber tosses out Minister of Security and head of PNC

The Constitutional Chamber of El Salvador's Supreme Court declared today that the Minister of Public Security and the Director of the National Civilian Police (PNC) were both named invalidly because both were ex-military officers who had retired just before taking their civilian jobs. President Mauricio Funes had named the former Minister of Defense general David Munguía Payés to be Minister of Public Security and retiring general Francisco Ramón Salinas Rivera to be Director of the PNC in November 2011 and January 2012 respectively. These appointments came despite criticisms from his own party and human rights groups about the appropriateness of naming military men to be in charge of civilian policing. One of the achievements of the 1992 Peace Accords which ended El Salvador's civil war was the removal of the military from domestic affairs. This principle, which became a part of the post war constitution, required a complete separation of the military and the
Post a Comment
Keep reading

The gang truce and the Catholic Church

May 16, 2013
I just finished reading an excellent new white paper titled The El Salvador Gang Truce and the Church: What was the role of the Catholic Church? .  The paper is written by Steven Dudley, one of the directors at Insight Crime , and is the first of a whitepaper series from the Center for Latin American and Latino Studies at the American University. The paper takes a close look at the role of Bishop Fabio Colindres as a public face to the mediation effort and the reaction of the Catholic church hierarchy in El Salvador: When asked why they chose the Church to help in the process, the negotiators have danced around this subject. The government’s chief negotiator Mijango focused on what he called the “moral authority” the Church held in El Salvador and its experience in mediating conflict in the country. He also drew on what he said was a shared understanding of the Church’s longtime role in El Salvador. “There is a recognition of the Church’s role as an institution that had mediated th
2 comments
Keep reading

May 15, 2013
The NGO EcoViva highlights this recent article which appeared on ContraPunto and IPS describing the potential conflicts between US-funded development opportunities and ecological protection of sensitive areas along El Salvador's Pacific coastline: Even though the Salvadoran government has placed its bets on developing the Pacific coast region, community leaders understand that it brings a threat to the environment in the zone.  If private investments arrive to natural protected areas in the Salvadoran coast, as intended by the government as part of a second round of funding from the Millennium Challenge Corporation, under the U.S. Partnership for Growth (PFG) , “the natural resources that we have protected for so long would be seriously affected,” said Amilcar García, secretary of the Mangrove Association, which is located in the Lower Lempa, in the southern part of the department of Usulután.  In December 2011, the Millennium Challenge Corporation (MCC), the U.S. governme
Post a Comment
Keep reading

The rainy season in El Salvador begins in May.   The rain storms of the season  bring the possibility of flooding each year along the country's rivers and mudslides across its volcanic slopes.   This map shows all the areas of the country which were impacted by Tropical Depression 12-E in 2011, and provides a good illustration of the areas at risk each and every year. El Salvador's Civil Protection Commission has identified 2671 zones at risk from the rainy season weather which is forecast to include as many as 14 tropical storms in the western Pacific and 18 storms in the Caribbean and Atlantic. The Commission also reported that it will be spending more than $75,000 on a project to reduce flooding by the  Río Grande de San Miguel which has overtopped or broken through levees and flooded the community of Puerto Parada in Usulután on a regular basis in recent years.
Post a Comment
Keep reading

Case of Beatriz gets international attention

May 11, 2013
The case of a young woman in El Salvador , known only as Beatriz, drags on without resolution, and has drawn increasing international attention.   Doctors say that she needs a therapeutic abortion to save her life, but El Salvador's absolute anti-abortion law prohibits it.  Appeals to El Salvador's Supreme Court have produced no results. You can read the latest developments at the Guardian and from al Jazeera .
Post a Comment
Keep reading

A blow against impunity in Central America

May 11, 2013
A Guatemalan court has convicted former Guatemalan dictator Efrain Rios Montt of genocide and crimes against humanity.    Through a decades long civil war, Guatemala's indigenous people suffered brutal massacres by the country's army.   Now, thirty years later, the country's own courts have meted out justice.   From the LA Times : MEXICO CITY -- Efrain Rios Montt, the former Guatemalan military dictator who ruled his country during one of the bloodiest phases of its civil war, was found guilty of genocide and crimes against humanity Friday for the systematic massacre and displacement of ethnic Mayan people. He was sentenced to 80 years in prison.  The landmark ruling by a three-judge panel headed by Yassmin Barrios came after a dramatic trial that featured testimony from dozens of Maya who described atrocities committed by the Guatemalan army and security forces as they sought to clean the countryside of Marxist guerrillas and sympathizers during the 1982-83 period t
1 comment
Keep reading

May 09, 2013
The reduction in the homicide rate in El Salvador which began with the gang truce in March 2012 has continued through the first four months of 2013. The National Civilian Police report that there were 764 homicides in January through April, down 502 murders from the same period the year before.   The PNC also reported a 63% reduction in murders of women. The murders are down, but there is little analysis available of who the victims are and whether there are fewer murders proportionately in the so called "cities free of violence."   The same report also indicated that there has been no reduction in robberies, kidnappings or extortion.
1 comment
Keep reading
More posts