Showing posts from December, 2018
Show all

December 29, 2018
Deputies in El Salvador's National Assembly have elected a new attorney general. The deputies passed over current attorney general Douglas Melendez to elect Raúl Melara as the country's new top prosecutor.  It is an important role in a country with high levels of criminal violence and corruption. Melendez had been actively campaigning for a second term, and had the  backing  of the US.  But perhaps his anti-corruption work had made politicians in El Salvador too uncomfortable.  From Reuters : SAN SALVADOR (Reuters) - El Salvador’s legislative assembly on Friday denied Attorney General Douglas Melendez a second term, after he pursued tough anti-corruption investigations and put a former president in prison.  In less than three years, career prosecutor Melendez also jailed his predecessor, a judge and a top businessman, among others, and faced death threats for his work.  But after several days of backroom negotiations, El Salvador’s main political parties decided not to
Post a Comment
Keep reading

Murders are down, but how many missing persons need to be added to totals?

December 15, 2018
This article originally appeared with the title  Homicides Down, Disappearances Up: El Salvador’s Conflicting Numbers on the website of Insight Crime. Written by Anna Grace - DECEMBER 13, 2018 Homicide rates in El Salvador are set to be at their lowest in years, yet the number of disappearances has increased dramatically in the same time, suggesting that the Salvadoran government does not have as a tight grasp on security issues as initial figures may imply. As 2018 draws to a close, the latest figures from the National Civil Police of El Salvador (Policía Nacional Civil – PNC) tell a tale of two countries. Murder rates in 2018 have dropped to their lowest levels since the 2012 gang truce , with 3,151 homicides registered as of December 7. However, 3,382 people have been reported missing, almost 200 more than the year before. This year, seven to 10 Salvadorans disappeared on average each day, El Diario reported . The number of those going missing has increased steadily
Post a Comment
Keep reading

US coming around on El Mozote 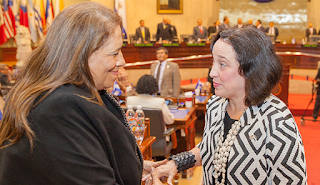 Recently disclosed documents from the US State Department show that the US Embassy in El Salvador is closely following the case of the massacre of children and others at El Mozote as well as other human rights cases from the civil war period.   The documents in question were released in response to open records requests from the University of Washington Center for Human Rights  (UWCHR). One of the most interesting documents is a   June 29, 2017 cable from US Ambassador to El Salvador Jean Manes.  The document describes the embassy's assessment of the proceedings surrounding the El Mozote massacre case.  The UWCHR explains the significance of the cable: [The] cable drafted by Ambassador Manes, dated June 29, 2017, “El Mozote Massacre Trial: Test Case for Civil War Accountability”, is significant for its recognition that a massacre took place at the hands of the Atlacatl Battalion during “Operation Rescate”. The confirmation from the U.S. embassy that it was in fact a massacre
2 comments
Keep reading

December 10, 2018
The New York Times has an extensive article today on US involvement in the battle against gangs in El Salvador titled A Conflicted War: MS-13, Trump and America’s Stake in El Salvador’s Security .  The article describes recent US security aid: The United States has stepped up its engagement in the country over the last two years, dedicating hundreds of millions of dollars and dozens of law enforcement and military personnel to fighting the violent gangs that send so many Salvadorans fleeing to the American border. The goal is to create a self-sufficient Salvadoran justice system. But the consequences of the effort are difficult to assess.  American advisers are training the police officers who arrest gang members. American dollars are building the prisons that hold them. At an American facility in San Salvador, detectives are learning how to investigate crimes. It is part of a plan to send $750 million into Central America’s violent Northern Triangle — El Salvador, Guatemala and H
Post a Comment
Keep reading

December 05, 2018
Next week will mark the 37th anniversary of the massacre of children and others at El Mozote and surrounding communities.  From December 10-12, 1981, US-trained forces of the Salvadoran military massacred close to 1000 civilians in and around El Mozote in Morazan department in northeastern El Salvador.  In this atrocity, more than half of the victims were children and 477 were age 12 and under. Commencing in October 2016 , there is finally a legal proceeding in a court in El Salvador which seeks to provide justice for the victims.  The process in the case is slow but steady. This past year more victims got to tell their stories in the court room.    Expert forensic anthropologists from Argentina testified concerning the actions of the perpetrators revealed by the recovery of hundreds of massacred bodies. This is also a year in which the military continued to stonewall and claim that it has no records concerning the events of December 1981. In a blog post  for the European Jou
3 comments
Keep reading

December 03, 2018
Sunday, December 2, marked the 38th anniversary of the 1980 murder of the four US churchwomen by Salvadoran troops in El Salvador.  Their murder marked another atrocity from a bloody year which earlier saw Oscar Romero assassinated and in which thousands of civilians were killed by the military and death squads.  While there is some movement towards a legal proceeding after the reopening of the Romero assassination case, those responsible for ordering the murder of the churchwomen have never been prosecuted.    I have been remiss on this blog in not earlier pointing readers to Eileen Markey's excellent biography of Sister Maura Clarke titled  A Radical Faith: The Assassination of Sister Maura .   In this biography, Markey offers us an intimate look at the faith and conviction which led a young woman from Queens, New York, to take religious vows and eventually immerse herself in the struggles of oppressed peoples in Nicaragua and then El Salvador.   She became a martyr for her
Post a Comment
Keep reading

December 02, 2018
There was progress against impunity in El Salvador this week as a court handed down sentences against soldiers involved in "disappearing" three youth in the town of Armenia, El Salvador. The events in the case took place in February 2014 and arose from the military's role in patrolling El Salvador in support of the police in battling the country's gangs.  A group of youth were talking in front of their houses in the municipality of Armenia. Six or seven soldiers on patrol approached the group and at gunpoint forced five of the boys to accompany the soldiers.  They were taken from a zone controlled by the Barrio 18 gang to a zone controlled by MS-13.   Two of the youth were released, and they went off to wait for their three remaining friends.  Their friends never appeared, and to this date have never been seen again. Parents of the youth, including one father who was a member of the police, immediately began questioning the military, petitioning the police, prose
Post a Comment
Keep reading
More posts