An update on those big promises 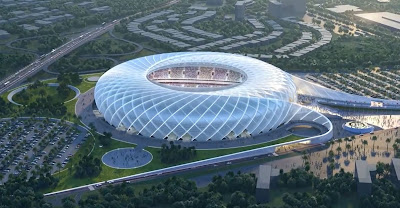 Computer rendering of a new stadium, still far in the future   The public relations machine of the government of Salvadoran president Nayib Bukele thrives on touting major development and infrastructure projects.  From time to time, we need to check in on how these projects are actually faring.  Here is their status at the beginning of 2023. The Chinese projects. The major projects which are the farthest along are those which the Salvadoran government has not had to raise the money for because they are donations by the Chinese government.   These were gifts announced by Bukele after his 2019 visit to Beijing. National Library .  The new national library in the heart of the historic center of San Salvador is under construction.  This video with drone footage taken yesterday shows the building rising up on one side of Plaza Barrios, facing the Metropolitan Cathedral.  Water purification and extraction from Ilopango .  An announcement was made in November that the project to purify wate
Post a Comment
Keep reading

Public opinion at the start of 2023

January 20, 2023
How does the Salvadoran public feel about the country and its challenges at the beginning of 2023?  As part of our series on the current state of El Salvador in several areas, today we look at public opinion.  Recent polls taken in December 2022 and released by long-standing credible polling organizations -- LPG Datos and the University Institute of Public Opinion at the UCA -- give important insights into the mood of the public.   A quick summary -- the public strongly approves of what president Nayib Bukele has accomplished to address gang violence and crime, and now the public's biggest worry is the economy and inflation.  IUDOP -- poll results published here . LPG -- poll results published here in series of articles between December 13-15, 2022. To start with, 80% of Salvadorans say the country was better off in 2022 than in 2021 (IUDOP) The economy is the biggest problem . 63.4% of those polled said economy was the biggest problem compared to only 19.6% who said the biggest p
Post a Comment
Keep reading 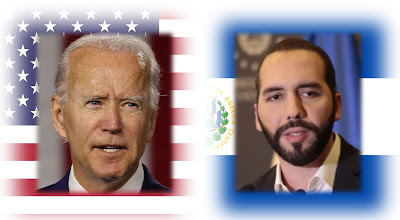 In 2023, a newly confirmed US ambassador will arrive in El Salvador in a challenging environment.  On December 13, 2022, the US Senate confirmed William Duncan as the new ambassador to El Salvador. Duncan is a career foreign service officer with a long history in Latin America.  He has not yet arrived in El Salvador to take up the post, but when Duncan gets here, he will encounter a relationship at one of its lowest points in decades. For the first year and a half of his presidency, Nayib Bukele enjoyed a cozy relationship with the Trump administration then in office. Bukele famously stated after meeting with Trump on the sidelines of a UN meeting that Trump was ”nice and cool.” Bukele met several times with Homeland Security officials from the US and his government was seen as one of Trump's closest allies in Latin America. With Trump, the relationship with the US rested on a basic proposition – in return for help on reducing the flow of migrants towards the US southern border
Post a Comment
Keep reading

Some news of the week

January 15, 2023
I'll continue with my series on the status of 2023 El Salvador, but in the meantime, here are some of the other stories from the past week. Earthquake rattles country A magnitude 5.1 shallow earthquake struck western El Salvador in the department of Ahuachapan close to the border with Guatemala on Sunday afternoon. The quake and several aftershocks produced some property damage to buildings, but there were no reports of injuries. Equipos de @PROCIVILSV remueven escombros por el colapso de un muro en el Complejo Educativo Fabio Morán, Las Chinamas. #SismoSV pic.twitter.com/C6cxk4246G — Mauricio Orellana 🎥 🇸🇻 (@MauriOrellanaSV) January 16, 2023 Groups protesting actions of the government marched. On Sunday, January 15, protesters marched through the streets of El Salvador's capital city.   Marchers included those protesting the State of Exception, captures of innocent persons, corruption, and other concerns.  The march coincided with the 31st anniversary of the Peac
Post a Comment
Keep reading 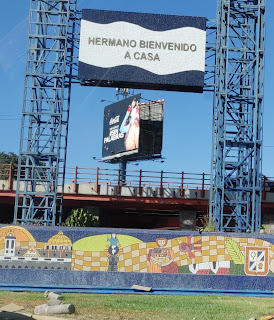 Monument to Our Distant Brothers, San Salvador Three Salvadoran girls, aged 9 years, 6 years and 18 months, were discovered in bushes on a small islet in the Rio Grande (Bravo) near Piedras Negras on Wednesday.  Little is known publicly about how or why the girls ended up in this spot on the border with the US, but it is suspected they may have been abandoned there by migrant smugglers.  A video from the Mexican government shows the moment when they were picked up by authorities in a boat. For decades, a major reality for El Salvador has been the outward flow of its inhabitants towards the US.   The discovery of these children at the border reminds us that the river northwards has not ceased under the presidency of Nayib Bukele.  Today we take a look at the numbers behind migration as El Salvador enters 2023.  The multitude still leaving El Salvador The only real statistics we have regarding the total number of Salvadorans leaving the country are reflected by the numbers reported as
Post a Comment
Keep reading 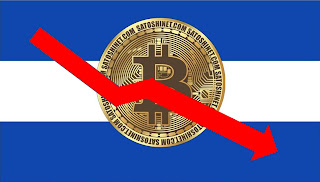 The year 2022 was not the golden year for a Salvadoran Bitcoin economy which El Salvador's president Nayib Bukele had hoped for, but he still includes himself among the crowd of Bitcoin true believers. At the beginning of 2022,  Bukele confidently tweeted out his predictions on Bitcoin for the next 12 months:  Bukele missed on every one of those predictions, as Sergio Goschenko writes in  this article  at Bitcoin.com.  Two major trends in 2022 impacted Bukele's Bitcoin gambit for El Salvador -- the collapse in the price of Bitcoin with other crypto-currencies and the refusal of ordinary Salvadorans to adopt Bitcoin in everyday use.   At the end of 2022, the Salvadoran government established a " National Bitcoin Office " whose role is described as overseeing the country's domestic Bitcoin projects.   So far, that office seems to primarily be another public relations arm of the government, aggressively cheerleading for the country as a Bitcoin leader.  This promot
Post a Comment
Keep reading 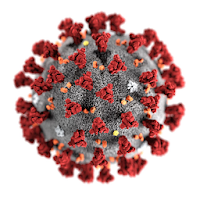 As El Salvador enters 2023, it is at the end of what has been labelled its 6th wave of COVID-19 cases.  This was a surge of cases which began in October/November 2022 primarily due to the impact of Omicron subvariants.     According to the Ministry of Health there were only 10 patients in the Hospital El Salvador for treatment of COVID-19  as of January 9 , and only 8 persons tested positive  that day for the virus across the country compared to as many as 350 daily cases at the end of November. When the 2023 school year starts on February 6, the last pandemic measures will ease.  While the entire 2022 school year was hybrid with a mixture of in-person and remote learning, public schools in 2023 will finally return to all in-person classes. President Bukele who was the country's lead communicator on the pandemic in 2020 has moved on and never mentions the pandemic these days.  The last presidential  tweet  using the word "Covid" was in December 2021.    Mask wearing is no
Post a Comment
Keep reading
More posts