Showing posts from April, 2015
Show all

April 20, 2015
On Wednesday, April 22, election officials will start the process of opening 2872 ballot boxes from the department of San Salvador to re-count ballots vote by vote to determine the 24 seats in the National Assembly from San Salvador.   The election originally took place on March 1. The recount was ordered by the Constitutional Chamber of El Salvador's Supreme Court.  The court found that there were sufficient irregularities in the vote tally sheets from San Salvador that the only remedy was to examine all of the individual ballots from the country's largest department. The recount process may take a few weeks.  Because the balance of power was evenly split based in the initial vote count, this recount still has the possibility of changing who controls the majority in the National Assembly. El Salvador's longest, most complicated election process continues on.
1 comment
Keep reading

From policing to a war footing 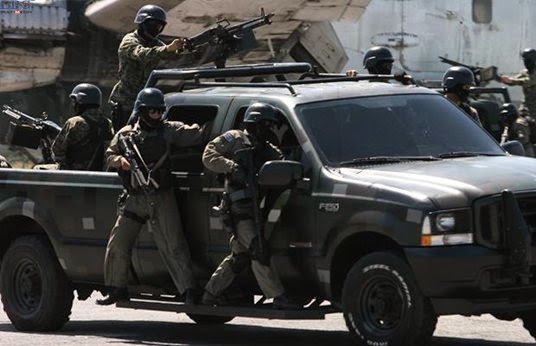 Photo -LaPrensaGrafica There has been a war going on in El Salvador for many years involving El Salvador's gangs. The Mara Salvatrucha, the Barrio 18 and smaller gangs ruthlessly kill each other's members over territory, in retribution, or just for being in the wrong place at the wrong time. In 2012, the so-called "tregua" or truce among these gangs dramatically lowered the levels of killing until the truce dissolved in 2014. Now the war seems to be taking a dangerous turn with El Salvador's armed forces going on a combat footing. The gangs are still warring with each other, but now the armed forces appear to be transitioning from patrolling the streets in dangerous parts of the country to active missions. President Salvador Sánchez Cerén  announced that El Salvador's army was readying three rapid reaction battalions of 400 soldiers each which could be deployed to the most dangerous zones in the country. There are already 7000 military perso
Post a Comment
Keep reading

Photo - MARN This month has seen concerted and united effort by environmental and human rights groups in El Salvador to pass a constitutional reform to declare water and adequate food as basic human rights.  The amendment to El Salvador's constitution must be passed before the current legislative session ends on April 30, or the effort must start over. A 2010 article from IPS titled  El Salvador: Most Water-Stressed Country in Central America   provided the statistics which show the necessity for laws to protect the country's water resource: El Salvador is one of the most deforested countries in Latin America, and its high population density of 300 inhabitants per square kilometre, and the fact that 63 percent of the population lives in cities, lead to high demand for water, which is not available to everyone, Cuellar said.  Official figures from 2008 show that only 55 percent of rural-dwellers have piped water, compared to 90 percent of the urban population.  In t
Post a Comment
Keep reading

April 10, 2015
View image | gettyimages.com Former General Eugenio Vides Casanova was deported this week from the US, and arrived in El Salvador on a plane full of other Salvadorans who US authorities were deporting. An article today in The Independent describes the legal proceedings in the US, which led to the former general's inglorious return to El Salvador after living in the US since 1989. He will be able to live freely in El Salvador, protected by a 1993 Amnesty Law which blocked prosecutions for crimes committed during El Salvador's civil war. Groups of protesters, representing victims of human rights abuses committed by troops under Vides Casanova's command, were at the airport to denounce ongoing impunity in El Salvador. In other news, the US announced that it wants to extradite to Spain former Colonel Inocente Orlando Montano, one of 20 former military officers being tried in a Spanish court for their roles in the 1989 killing of the Jesuits.   Montano had bee
Post a Comment
Keep reading

The churches, the gangs, and the truce 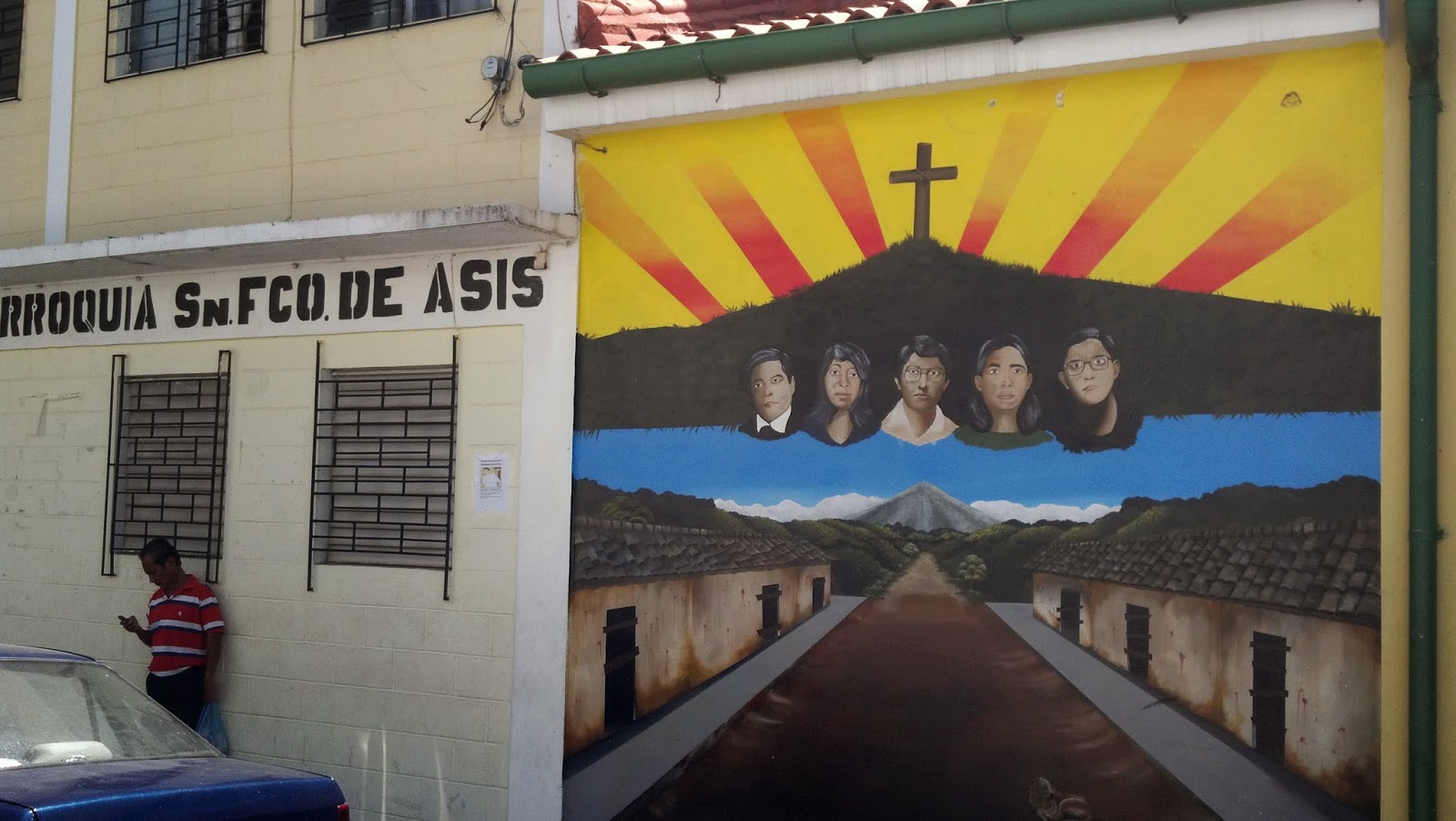 At Passionist Social Services, St. Francis de Assisi parish, Mejicanos Writing in  Christian Century , Paul Jeffrey has an article titled simply "Truce"  which looks at the role of various priests and churches in the now-collapsed gang truce and other violence prevention initiatives in El Salvador.   Here's an excerpt: Life may get more difficult soon in Mejicanos. At the beginning of this year, the national legislature approved a packet of new laws strengthening the powers of police and prosecutors in the fight against gangs. Government officials told police officers—who wear ski masks when patrolling neighborhoods with gangs—that they need not worry about being second-guessed when they use their weapons to shoot gang members.  Bodies of executed gang members started to appear along roadsides, reminding many of the social cleansing carried out by death squads in decades past.  In Mejicanos the Passionist priests aren’t easily scared off. They took charge o
Post a Comment
Keep reading

Processions of the faithful mark Good Friday in El Salvador

In El Salvador, with its culture deeply rooted in Roman Catholicism, each Good Friday sees processions and religious events commemorating the crucifixion and death of Jesus Christ.    Here are a collection of images and links to media galleries sharing sights from around the country. As Good Friday approaches, streets in many towns are covered with alfombras, colorful carpets of colored salt showing religious and artistic scenes: Photo - ElSalvador.com Gallery of alfombras at ElSalvador.com Those carpets would be walked across during Good Friday processions.  One of the most traditional and colorful is the Via Crucis procession in Nahizalco: Photo-Diario1.com Gallery of images from Nahuizalco at Diario1.com . Photo - ContraPunto.com Gallery from Nahuizalco at ContraPunto.com A procession through San Salvador: Photo - LaPrensaGrafica Gallery of images from San Salvador at LaPrensaGrafica Good Friday ends with processions of the Holy Burial,
Post a Comment
Keep reading

April 03, 2015
The following post is being reprinted from the website of InsightCrime . Written by David Gagne El Salvador reported more homicides in March than in any other month over the past 10 years, a high-water mark for violence in an evolving criminal dynamic that is taking on overtones of a low intensity war. El Salvador's National Civil Police (PNC) registered 481 homicides during the month of March, for an average rate of 16 murders per day, according to La Prensa Grafica . The previous record for murders during the last 10 years was in October 2009, when the PNC recorded 437. El Salvador's homicide figures during the past month represent a 52 percent increase from March 2014. At that time, former director of the PNC, Rigoberto Pleites, told Salvadoran media the country's 2012 gang truce was " technically finished " due to the rising number of homicides. According to authorities, El Salvador witnessed six massacres last month, including the  killing of eig
Post a Comment
Keep reading
More posts