Showing posts from August, 2016
Show all

They disappear every day

The media (and this blog) regularly report on the very high homicide rate in El Salvador.   Under-reported are the cases of the "desaparecidos" - the disappeared - of El Salvador.   We are not talking about the thousands still missing from El Salvador's civil war, that's the story for another blog post.   Instead we are talking about hundreds and hundreds of primarily young people who are annually kidnapped, abducted, or "disappeared" and never heard from again. Disappearances are a daily occurrence in El Salvador.  In September 2015, La Prensa Grafica  reported that four persons were being reported as missing every day in El Salvador. In December 2015, the Instituto de Medicina Legal (IML) which operates El Salvador's morgue, opened a new section to attend to the five to fifteen families which arrive each day seeking to ascertain if their missing loved ones have passed through the doors of the morgue. The attorney general's office in El Salv
Post a Comment
Keep reading

Rutilio Grande was a Jesuit priest who was murdered by El Salvador's military in 1977 for his work empowering poor communities in the countryside.   His murder was an event which made clear to San Salvador's new archbishop Oscar Romero, the kind of pastoral leader he would need to be. The Roman Catholic church has now opened the process which could lead to Rutilio Grande's canonization as a saint.   As reported by Carlos Colorado, the phase of the process conducted in the church in El Salvador concluded in August and the cause now goes to Rome. Thomas M. Kelly wrote in America magazine in June of this year: What Father Grande learned and lived out was a simple truth: Until the marginalized communities he served created their own agency, until they acted upon their own reality as a church community, nothing would change. An outside leader could not come in and transform poor communities. Only local lay church leaders could encourage communities to become agents o
Post a Comment
Keep reading

August 18, 2016
On Wednesday August 17, raids were conducted on several locations tied to Miguel Menéndez (known as "Mecafé") one of the financial backers of the 2009 presidential campaign of Mauricio Funes.   Mecafe was one of the prominent "Amigos of Mauricio Funes," a group of business people outside of the FMLN hierarchy who supported the former journalist's run for president.  Funes was the first president of El Salvador elected from a left-wing party. The raids are part of a corruption investigation against the former president including allegations of influence-trafficking, misappropriation and illicit enrichment.  Mecafe owns a private security firm named Cosase which earned millions in contracts with the Funes administration to provide private security services.  Mecafe became the chief of the El Salvador convention authority during the Funes administration. The ex-president has been denying any allegations of wrongdoing on his Twitter account . There is also an
Post a Comment
Keep reading

August 17, 2016
There are reports in the Salvadoran press that El Salvador's Supreme Court will refuse to extradite former military officers to Spain in connection with the 1989 Jesuit murders.    At the moment the court's written ruling does not yet appear to be available, so there is some speculation about the reasoning of the Court.    A La Prensa Grafica report today indicated that the Court would not allow extradition of Colonel Guillermo Benavides because he had already been tried and sentenced to 30 years in prison in 1992.  Benavides was subsequently released after publication of the UN Truth Commission report which criticized the faulty trial which suppressed evidence of the responsibility of more senior officers.   There is a suggestion that Benavides might have to finish the rest of his sentence. In a story in ContraPunto , human rights lawyer Benjamin Cuellar pointed to the recent overturning of El Salvador's amnesty law by the Constitutional Chamber of the Supreme Court.
1 comment
Keep reading

All those cars in El Salvador

August 15, 2016
Traffic in El Salvador, particularly the capital city of San Salvador, is maddening as shown in some of this video footage from the AP in 2015.  (Actually I think the traffic is worse than shown in this video, but I am not going to take my hands off the wheel to provide you with a video). And the number of cars on El Salvador's road continues to grow.   According to government statistics reported in La Prensa , there were some 35,000 cars imported into the country during the first six months of 2016.    Of those cars, roughly two thirds were used cars. The used cars imported into El Salvador are primarily ones which were purchased at insurance salvage auctions in the US.    When cars are declared total losses by US insurance companies because of wrecks or floods, they get sold at auction .   Typically the cars cannot be re-sold or re-registered in the US.   Instead they go into foreign markets like El Salvador.  There is a booming Salvadoran market importing wrecked cars, f
Post a Comment
Keep reading

August 15, 2016
Current trends in global climate change pose serious threats to the production of El Salvador's food staples of corn and beans, particularly in the eastern part of the country.   This was one of the conclusions of a study of the UN Food and Agricultural Organization presented at a meeting of the Community of Latin American and Caribbean States (CELAC) last week. According to the FAO , the average temperature in El Salvador has increased 1.3 degrees centigrade in recent decades, more than the global average increase of 0.8 degrees.   Future projections see another increase of 2.6 degrees if current patterns are not changed. Although short term forecasts are for an increase in rain, there could be a long term reduction in annual rainfall of as much as 11% and delays in the annual start of the rainy season.   This will mean continued stress on El Salvador's water resources. The eastern part of the country will be the most severely impacted. The region already lies in what
Post a Comment
Keep reading 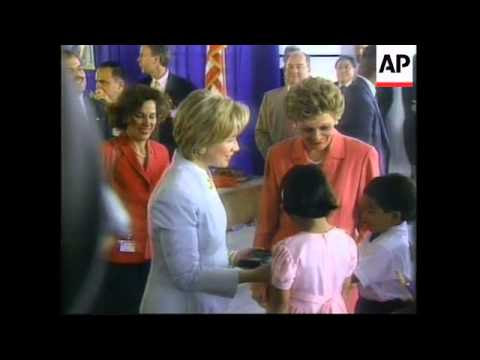 As Hillary Clinton campaigns to become the first female president of the United States, I thought I would check on her previous connections to El Salvador. As first lady, during Bill Clinton's presidency, Hillary traveled to El Salvador in November 1998 following Hurricane Mitch which devastated much of Central America.  Hillary announced additional US relief aid which was coming to the region and toured an orphanage with El Salvador's first lady, Elizabeth Calderon. There is an AP News  video  of the visit. Hillary was scheduled to come to El Salvador again in 1999 to accompany Bill as he made a tour through Central America, however, back troubles kept her from accompanying him. In 2009, as Secretary of State, Hillary Clinton travelled to El Salvador for the inauguration of Mauricio Funes as the first Salvadoran president elected from a left wing political party.  A transcript of her press conference with president Funes can be found here .  Hillary would
1 comment
Keep reading

August 11, 2016
Embed from Getty Images August 9 is declared by the UN to be the International Day for Indigenous Peoples.   The online periodical ContraPunto provided a photogallery of members of El Salvador's indigenous peoples commemorating the date. During the 20th century, El Salvador's indigenous communities were almost completely wiped out through massacres and repression.   In 2010, Salvadoran president Mauricio Funes made an act of public apology for the country's treatment of indigenous peoples.
Post a Comment
Keep reading

August 10, 2016
In twelve years of blogging about El Salvador, I early learned the lesson that things are often not what they seem.   This is particularly true when it comes to the world of crime, gangs and policing in El Salvador. Yesterday I wrote a long blog post about the arrest of Dany Balmore Romero García.   It appeared that the arrest of Romero may have been an attempt to quash his documenting of extrajudicial killings by security forces in El Salvador.   In the articles cited in my blog post, there were many voices coming to the defense of Romero.   After that post was published, El Faro published a story written by Efren Lemus titled  Purgas en la cúpula de la MS-13 por dinero ( Purges in the leadership of MS-13 because of money ).  El Faro had obtained access to wiretapped recordings in the possession of Salvadoran authorities involving top MS-13 leaders.    The article details how one group of MS-13 leaders, the Holloywood Locos, were angry that another MS-13 section, the Fulton Loc
Post a Comment
Keep reading

August 09, 2016
Operation Check nabbed dozens of MS-13 gang members alleged to have been involved in the finances and leadership of the notorious gang in El Salvador.    But it appears that Salvadoran authorities may also have used the round-up to arrest an activist who was documenting extra-judicial killings by security forces in the country.   Dany Balmore Romero García  was included among those arrested on July 28, after years of documenting alleged human rights violations against prisoners and alleged gang members. Nina Lakhani, in an article in the Guardian the day after the round-up, pointed out Romero's arrest: Dany Romero, a former MS-13 member who has dedicated himself to human rights and gang prevention work since he was released from prison in 2006, was arrested and accused of using his NGO OPERA as a front for criminal activities. Romero, who has won several prizes for his activism, has in recent years documented human rights abuses carried out by state security services agains
Post a Comment
Keep reading

August 04, 2016
Last week authorities in El Salvador launched a major operation directed at the leadership and finances of one of El Salvador's major street gangs, Mara Salvatrucha -- also known as MS-13.  This round-up of gang members showed an organization moving its funds and expanding its wealth in businesses like hotels and automobile sales.  It is potentially a significant achievement in the country's battle with the gangs. The police raids were named Operation Check ("Jaque").  The  Washington Post  describes the action : In an extensive operation Thursday that resulted in 77 arrests, 106 seized vehicles and 34 frozen bank accounts, the Salvadoran government targeted the financial holdings of the gang, exposing the enrichment of its leaders and sending a message to the impoverished rank and file. “You should know that your leaders are living differently from the rest of you,” said Douglas Meléndez, the attorney general.  Among those captured in Operation Check was Marvin
Post a Comment
Keep reading
More posts