August 12, 2016
As Hillary Clinton campaigns to become the first female president of the United States, I thought I would check on her previous connections to El Salvador.

As first lady, during Bill Clinton's presidency, Hillary traveled to El Salvador in November 1998 following Hurricane Mitch which devastated much of Central America.  Hillary announced additional US relief aid which was coming to the region and toured an orphanage with El Salvador's first lady, Elizabeth Calderon.

There is an AP News video of the visit.

Hillary was scheduled to come to El Salvador again in 1999 to accompany Bill as he made a tour through Central America, however, back troubles kept her from accompanying him.

In 2009, as Secretary of State, Hillary Clinton travelled to El Salvador for the inauguration of Mauricio Funes as the first Salvadoran president elected from a left wing political party.  A transcript of her press conference with president Funes can be found here. 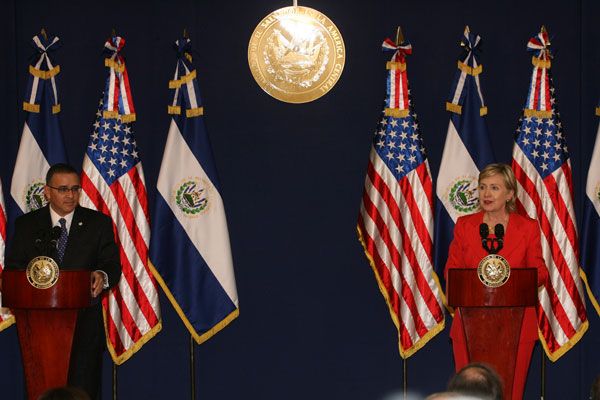 Hillary would meet again with Funes in 2010 when Funes made a trip to Washington, D.C.   Their joint remarks can be found here.

There is also another El Salvador connection for Hillary Clinton:  Monica Lewinsky.  The White House intern who had an affair with president Bill Clinton is the daughter of a citizen of El Salvador. Lewinsky's paternal grandparents were German Jews who fled to El Salvador in the 1920's. Her father Bernard Lewinsky was born in San Salvador and later moved to California where Monica was born.

(I can't find any indication that Donald Trump has ever visited El Salvador.   There is a satirical video circulating on the internet, however, in which Donald announces that he is going to purchase the entire country of El Salvador to add to his property holdings.)

Greg said…
In 1996, then President Bill Clinton signed the documents that declared the U.S. war in El Salvador to have been a U.S. military campaign -

Now I know who to thank for motivating his signature and the resulting correction of history and formal acknowledgement of those lost on both sides during the conflict.