Showing posts from September, 2020
Show all

September 21, 2020
Today El Salvador's military refused to comply with a judge's order that it permit experts in records archives to inspect the historic files of the armed forces. The judicial order came in the war crimes trial for the massacre by Salvadoran armed forces of close to a thousand children, women, the elderly and others at El Mozote and surrounding communities in 1981. That trial is proceeding in a courtroom in San Francisco Gotera in Morazan Department under the direction of Judge Jorge Guzmán. Judge Guzmán had previously appointed several experts at the request of counsel for the victims to review the military archives from the war years. The appointment of experts follows years of stonewalling by the Salvadoran military, which has claimed that it cannot locate records, that the records don't exist, or the records were destroyed long ago. Before the experts could start their work, the armed forces command tried again at the end of August to block the inspection of its archive
Post a Comment
Keep reading

I haven't written a post about the progression of COVID-19 in El Salvador in several weeks.  That was the product of COVID fatigue, of numbness to the continuing battles between political players in El Salvador (and elsewhere in the world for that matter), and because it was hard to know with any certainty which way things were headed. It still is not any easier to know the future course of this pandemic in El Salvador and elsewhere in the Americas, but here is an update of where it stands today. The official Salvadoran government statistics for new COVID cases portray a dramatic drop off in the disease since peaking at 449 new cases in a day on August 9.   Over the next three weeks, the official daily new case totals showed a decline of more then 80%, such that cases in the first two weeks of September have been running between 80 and 100 per day. New daily confirmed cases of COVID-19 in El Salvador The government's tally of persons in moderate, grave or critical condition, w
1 comment
Keep reading 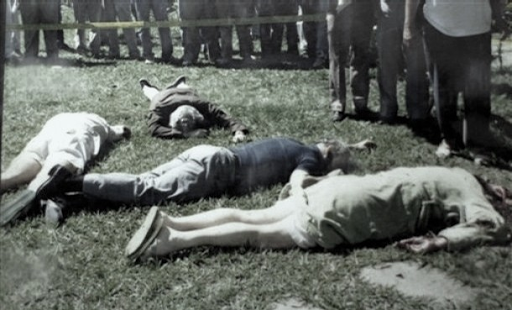 The court in Spain which heard the case of the 1989 Jesuit massacre, issued its ruling today, more than 30 years after Salvadoran troops killed six Jesuit priests, their co-worker and her daughter.  The court has been trying ex-Salvadoran vice minister of security Inocente Orlando Montano for his involvement as part of the military high command in giving the orders and subsequently covering up the massacre.   The judges of the court unanimously found Montano guilty of being one of the persons who directed the massacre.   He was sentenced to 26 years in prison for each of the 5 Jesuit priests who were Spaniards. As Almudena Bernabéu, the Spanish human rights lawyer who  helped build the case against Montano and get him extradited from the US , was  quoted in The Guardian  saying: “It’s not just a crime that happened 30 years ago, it’s about what impunity really means.”     Montano during trial Montano was the only defendant in Spain because the Supreme Judicial Court of El Salvador has
3 comments
Keep reading

How El Salvador deals with gangs

September 05, 2020
This article originally appeared on the website of InsightCrime with the title  3 Dirty Secrets Revealed by the El Salvador Gang ‘Negotiations’ By Steven Dudley The El Faro media group reported that the El Salvador government is “negotiating” with street gangs to keep homicide levels low, which may come as a surprise to most except other politicians, who also negotiate with gangs. The report – which was published on September 3 and is based on jailhouse intelligence reports, prison logbooks and interviews – says the administration of President Nayib Bukele has been engaged in talks with the gangs inside prisons since at least October 2019. Specifically, the logbooks note 12 visits by Osiris Luna, El Salvador’s director of prisons, to two prisons where he met with gang leaders, mostly from the Mara Salvatrucha 13 (MS13) but also from the Barrio 18 Sureños. On three occasions, he was accompanied by Carlos Marroquín, the head of the government’s Social Fabric Reconstruction Unit (Unidad
1 comment
Keep reading

September 04, 2020
On September 3, the online periodical El Faro published an investigation revealing how the government of Nayib Bukele has been negotiating with leaders of MS-13 within the country's prisons.   The article, written by journalists Carlos Martínez , Óscar Martínez , Sergio Arauz and Efren Lemus   is titled  Bukele's government has been negotiating with the MS-13 for a year to reduce homicides and electoral support  and relies on hundreds of pages of leaked internal documents from the Salvadoran prison system. The title of the article tells you most of what you need to know.   Starting in 2019 after Bukele took office and continuing to the present, representatives from Bukele's administration, headed by the director of prisons, Osiris Luna, have reportedly been negotiating with gang leaders. An English translation of the report is being produced, but the El Faro English newsletter summarized some of the investigation: Through months of negotiations, Bukele’s administration g
2 comments
Keep reading
More posts