I haven't written a post about the progression of COVID-19 in El Salvador in several weeks.  That was the product of COVID fatigue, of numbness to the continuing battles between political players in El Salvador (and elsewhere in the world for that matter), and because it was hard to know with any certainty which way things were headed.

It still is not any easier to know the future course of this pandemic in El Salvador and elsewhere in the Americas, but here is an update of where it stands today.

The official Salvadoran government statistics for new COVID cases portray a dramatic drop off in the disease since peaking at 449 new cases in a day on August 9.   Over the next three weeks, the official daily new case totals showed a decline of more then 80%, such that cases in the first two weeks of September have been running between 80 and 100 per day.

The government's tally of persons in moderate, grave or critical condition, which is a measure of hospital demand, dropped from 4701 on August 11 to 2925 on September 13. The government coronavirus risk map shows significant variation around the country in levels of coronavirus activity, with the highest levels occurring, not surprisingly, in urban areas.

To date, El Salvador has recorded a total of 27,009 confirmed cases of COVID19, with another 4283 suspected cases.  The official death toll (which only counts people who had a case of COVID-19 confirmed by a test) is 788.   The actual toll is acknowledged by all to be much higher.

An epidemiological analysis of the government data performed by Center for Mathematical Modelling at the Universidad Francisco Gavidia (UFG) in San Salvador, concluded that the curve shown above generated from official data does not reflect the actual progression of the disease in the country.  The curve simply does not match how the virus has progressed through comparable populations.  This does not require that there has be an intentional manipulation of data, but could simply mean that there has been a change in the methodology used for testing and for selecting who gets tested for the virus.  Unfortunately the Ministry of Health has not been transparent regarding who gets tested when.

According to the UFG analysis, a peak on August 9 could very well reflect infections produced during the course of people gathering for traditional August vacations from August 1-6.  The analysts estimate that only one fifth of cases of the disease are actually identified through testing in El Salvador.

Anecdotally, there is little doubt that the situation in El Salvador has improved to some degree.  On a personal level, fewer friends and acquaintances are reporting to me that they or their family members have contracted the disease.  There are few pictures in social media of overwhelmed hospitals.   Instead the government is talking about the number of empty beds in hospitals.

President Nayib Bukele shared his own assessment on social media:

21 days after the economic reopening, we do not see a sustained rise in the cases detected. This is seen not only in test results, but it is also seen in the hospitals, where there are already more than 2,600 empty beds. Calls to [the government's 132 COVID-19 response line] also remain low, despite the phone number being promoted to the population. Our epidemiologists believe that this result is the direct effect of the massive use of masks. Without having hard data, El Salvador could be one of the countries with the greatest use of masks per capita, in the world with a rate around 0.65, that is, 65% of the population. The use of a mask by both (sender and receiver) reduces the possibility of contagion by up to 95%. This is added to the fact that there are fewer sources of contagion, as a result of the decline in active cases since August 10, the date on which infections began to plummet.

But these excellent results can change quickly. That is why we must maintain all personal protection measures to the maximum, use of a mask all the time they are away from home, wash your hands, use alcohol gel, keep social distancing, etc. Even with all this, if you suddenly have symptoms, isolate yourself immediately and call 132. There we will tell you what to do, we will send medicine to your door, and if it is urgent, an ambulance will transfer you to a hospital, where you will receive the best attention.

As a consequence, the country is continuing to gradually reopen itself.  The international airport is scheduled to reopen gradually to commercial passenger flights starting September 19.  To be admitted to the country, arriving passengers must have a certified original of negative COVID-19 test results taken no more than 72 hours pre-flight.

Schools, however, will not return to in-person learning during 2020.

Traffic levels and the number of buses on the streets have increased significantly over the course of the last few weeks.  Here are screen captures of traffic cams from 5:20 PM on Monday, pretty much the height of rush hour in San Salvador showing high traffic volume: 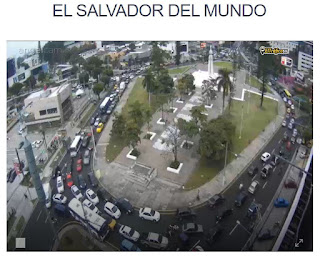 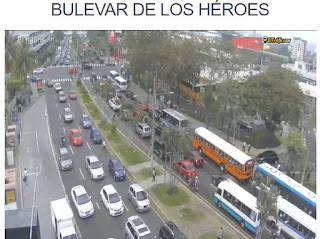 How much credit does Nayib Bukele and his government get for the current positive trajectory of the disease?    It is worth noting that at the beginning of August he was declaring that the virus could not be controlled unless the country returned to a super-strict home quarantine.    The country did not go back into a lock-down, but still the number of cases appears to be declining.   The government has been doing a good job in recent weeks and months of public messaging the need for those measures which science says are effective:  masks, social distancing, and sterilizing.   The population may have finally become sufficiently frightened to take those measure seriously.

El Salvador is far from out of the woods,   80 new cases a day, which could actually be 400 new cases, means that there is plenty of community transmission of the virus.   Even if the official totals are understated by ten fold, there are millions of Salvadorans in a small, densely populated country who have not yet been infected.   It will be a challenge to avoid a second large wave if disciplines such as mask-wearing start to erode.   As I said at the outset, the future course for El Salvador is hard to predict.

Shannon O'Neill said…
Really insightful view on the current situation in El Salvador! Thanks for sharing.
4:09 AM