Showing posts from December, 2022
Show all

December 29, 2022
El Salvador’s government delivered a Christmas gift to participants in its national pension system in the days before the holiday.  A pension reform law was passed on December 22 which increased benefits for persons receiving retirement pensions and made other changes to the financing of those benefits.      El Salvador's government run pension system is an individual account plan which functions by accumulating the contributions made on behalf of the employee, plus the credited interest on the account from the pension fund’s investment earnings.  At retirement age, a retiree’s monthly pension is the accumulated total divided by 260 (20 years at 13 payments per year).  If that calculation is less than the minimum pension ($400 under the new law), the minimum pension is paid. The retirement age for women is 55 and the retirement age for men is 60 years old.  Someone can start receiving a pension once they have reached retirement age and have 25 years of contributions into the syste
Post a Comment
Keep reading 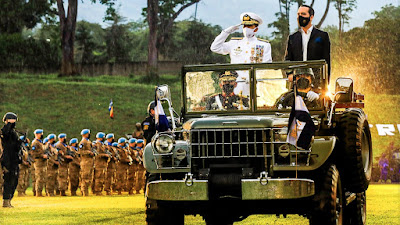 Anyone who spends much time on Salvadoran social media knows that those who publish information which might show the government of Bukele in a poor light, can expect to be met by a swarm of online attacks.   It happens to me from time to time (oh well, he shrugs), but the especially virulent attacks are reserved for local Salvadoran journalists and human rights activists. A new special report by Sara Kinosian at Reuters titled  Trolls, propaganda and fear stoke Bukele's media machine in El Salvador  shares revelations from interviews with social media specialists employed by the Bukele government. They were hired to swamp social media platforms with praise for the president and attacks on his critics:  These workers were cogs in what has become a powerful communications operation that has allowed Bukele to influence what Salvadorans read, watch and hear about their government like no previous leader of this small nation of 6.5 million people in the internet age. Key to this effort
1 comment
Keep reading
More posts