Showing posts from February, 2012
Show all

US and El Salvador talk security

February 29, 2012
US Secretary of Homeland Security Janet Napolitano made a tour through Mexico and Central America this week to talk about joint efforts on crime and drugs : Secretary of Homeland Security Janet Napolitano, U.S. Customs and Border Protection Acting Commissioner David Aguilar and Department of Homeland Security Assistant Secretary for International Affairs Alan Bersin today traveled to San Salvador, El Salvador and San Jose, Costa Rica to meet with their international counterparts, hear about their priorities and discuss the U.S. Government's work to facilitate legitimate trade and travel, enhance information sharing efforts and ensure a safe, secure and resilient global supply chain. “International security and the security of our homeland are inextricably linked. Today, threats transcend national borders and affect the security and economic prosperity of the entire international community," said Secretary Napolitano. “We are committed to working together with our Central A
2 comments
Keep reading

Defense minister responsible for torture can be deported

February 25, 2012
A defense minister during El Salvador's civil war, who has lived in retirement in south Florida for years, can be deported, a judge ruled this week. The AP reports : In a groundbreaking decision, a federal immigration judge has ruled that the former defense minister of El Salvador can be deported from the U.S. for his role in killings and human rights abuses during the 1980s. The ruling by the Orlando-based judge, James K. Grim, marks the first time a 2004 law aimed at stopping human rights abusers from taking refuge in the U.S. has been successfully used against a nation’s top military official, according to the San Francisco-based Center for Justice & Accountability. The judge found that the former defense minister, Gen. Eugenio Vides Casanova, can be deported for the torture of Salvadoran citizens, the 1980 killings of four American churchwomen and the 1981 killings of two Americans and a Salvadoran land reformer. The general's role in human rights abuses was fir
2 comments
Keep reading 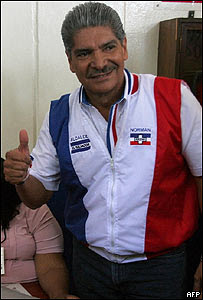 ContraPunto has a summary of recent polls leading up to the March 11 elections. One thing the polls are showing -- the race for mayor of San Salvador is not even close. Current mayor from the ARENA party Norman Quijano is trouncing Jorge Schafik Handal in the preferences of the city's voters. Handal is the son of one of the founders of the FMLN, Schafik Handal, who ran for president of El Salvador in 2004 and lost. Depending on the poll, Quijano's minimum lead is 25% and some of the polls have him leading by 50-60 points.
Post a Comment
Keep reading

February 22, 2012
The most recent poll from CID-Galup/Diario La Pagina shows 34% of voters planning to vote on March 11 for FMLN candidates for National Assembly deputy, 32% for ARENA candidates, and 16% for other parties. Almost one in five Salvadorans polled were undecided. The poll of 1008 eligible voters was taken between February 16 and 19 . These results are typical of the results almost every time Salvadoran are polled about their political preferences. One third of the voters show allegiance to ARENA on the right and one third to the FMLN on the left and everyone else is somewhere in between. I have yet to see any polling looking at voter preferences for individual deputies on the slate of any party.
2 comments
Keep reading

With their right fists clenched and thrust into the air, leading politicians of ARENA commemorated  Major Roberto D'Aubuisson on the 19th anniversary of his death Tuesday.  Among those at the ceremony at D'Aubuisson's tomb were former president Alfredo Cristiani and current San Salvador Mayor Norman Quijano.  D'Aubuisson is the founder of the ARENA party.   He is also the man who ordered the assassination of archbishop Oscar Romero and was the sponsor of right wing death squads during the 1970s and 80s.  This annual celebration of a war criminal by the ARENA party faithful shows that the culture of impunity is far from disappearing in El Salvador.  It's shameful.
4 comments
Keep reading

The worst forms of campaigning 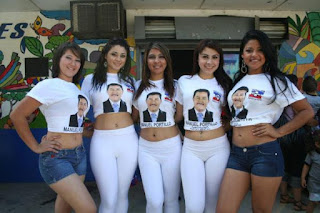 The Facebook page called " Sociedad Civil "  (Civil Society) is sharing a  photo album of the worst examples of campaigning  during this campaign season leading up to the March elections.  You'll need to be able to read Spanish to understand some of the comments, but some photos, like the one above, speak for themselves.
1 comment
Keep reading

Crime and the government's response

February 15, 2012
The website INSIGHT - Organized Crime in the Americas has been reporting regularly this month on the problem of violent crime in El Salvador and the government's increasingly "iron fist" response to it. Those articles include: Murders of Soldiers Add Weight to 'Gang Conspiracy' in El Salvador El Salvador Unveils Elite Anti-Gang Police El Salvador Proposes Curfew, Militarized Schools The Iron Fist Returns to El Salvador Are El Salvador’s Gangs Plotting to 'Take Down the System'? Insight usually puts its own analysis of the situation into these articles.   They are openly skeptical of the current path being followed by Funes and his public security team: In the end, the military men at the helm of El Salvador’s security strategy do not seem to be bringing any innovative ideas with them. Instead, they are appealing to a well-rehearsed narrative in which wild gangs terrorize the country, and can only be tamed by ever-stronger shows of might and
1 comment
Keep reading

February 07, 2012
The United Nations issued a report last week pointing to the serious problems in El Salvador's criminal justice system: 2 February 2012 – A United Nations expert human rights panel has voiced concern about the right to security impinging on the right to be free from arbitrary detention in El Salvador, as well as extreme overcrowding in prisons and police facilities in the Central American nation. Wrapping up a 10-day mission to the country, the five-member UN Working Group on Arbitrary Detention also highlighted the lack of written notification of sentences to the defendant and the lack of effective access to defence counsel. Another concern was the “over-reliance on informers and testimony by opportunistic witnesses,” the Group said in a news release issued in the capital, San Salvador. “This practice not only affects the credibility of testimonies due to the incentives offered, but also jeopardizes the fairness of the judicial process as the procedure of cross-examination
11 comments
Keep reading

February 05, 2012
In my last post I described the changed rules for electing deputies to the National Assembly.   Another change for the 2012 elections will be a significant expansion of residential voting.   Residential voting simply refers to having polling places which are closer to where people actually live.  Currently people are assigned to polling places which may or may not be the closest site to their home. There will be residential voting in nine departments in the eastern and central parts of the country: Cuscatlán, Cabanas, Usulután, San Miguel, La Paz, San Vicente, La Union, Morazán, Chalatenango as well as the cities of San Salvador and Santa Tecla.  This expansion of residential voting will cover approximately half the population.   More voting centers will be set up in rural communities closer to people than the actual municipality's center.   In the cities, people will vote in their neighborhoods rather than being assigned a voting center alphabetically according to their last n
Post a Comment
Keep reading 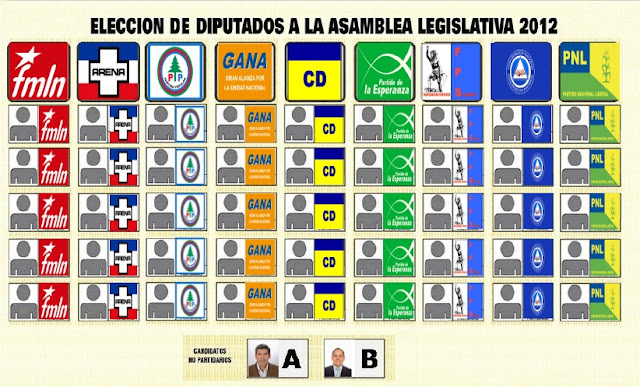 El Salvador has national elections approaching on March 11.   Salvadorans will be going to the polls to elect mayors and to elect deputies to the National Assembly.   The rules have changed this year as a result of decisions by the Salvadoran constitutional court .   For the first time, independent candidates can run for election to the National Assembly.  Also for the first time, voters can express their preferences for individual candidates from the slate assembled by a particular party. Here's a review of the changed process.  Each department within the country is allocated a certain number of seats in the 84 seat National Assembly according to its population. So, for example, the populous San Salvador department has 25 deputies and the less populous San Miguel department has 6 deputies. Each seat in the department has a vote quota equal to the total number of votes cast in the department divided by the number of seats. To use round numbers, if 1 million votes were cast in S
6 comments
Keep reading
More posts