Showing posts from January, 2012
Show all

January 27, 2012
Central to any discussion of crime and violence in El Salvador is the role of the maras  or street gangs.  They are a major contributor to the epidemic of murder, extortion and other crime afflicting the country.  Researcher Sonja Wolf sets out the scale of the problem in a recent article titled The Maras: An Escalating Problem in El Salvador for the Latin America Bureau.   Wolf describes the gangs' lifeblood - extortion: Extortions constitute the gangs' chief source of income. Initially they approached community residents for comparatively small sums, but over the years the shakedowns have become more extensive and sophisticated. Mano Dura, which entailed the large-scale incarceration of gang youths and especially leaders, required street-based members to collect more funds to support their detained peers and hire defence lawyers. Extortions had been coordinated from within the prisons until stricter security measures made it more difficult to smuggle in mobile phones.
1 comment
Keep reading

January 25, 2012
A guest post by Danielle Mackey and Theodora Simon. Violence and intimidation continue in El Salvador against environmental activists and defenders of human rights who have publically opposed metallic mining. The latest round of threats was focused against a Salvadoran Catholic priest, Father Neftalí Ruiz, and a community radio station, Radio Victoria. Fr. Ruiz, the Secretary of the Board of Directors of the Cabañas Environmental Committee and a member of the National Working Group against Metallic Mining (“The Mesa,”) was attacked on January 20th, when he opened his home to a group of supposed university students who had expressed interest in his work. The two young people then tied him up at gunpoint and proceeded to search the files on his computer. They left the home with the computer and media storage devices, but did not take anything else of value. The young men stated numerous times during the assault that they were looking for information and made several calls to a third p
Post a Comment
Keep reading

January 24, 2012
On Monday Mauricio Funes replaced the civilian head of the National Police (PNC) with retiring general Francisco Ramón Salinas Rivera. This came just a few months after Funes had named another former general, David Munguía Payés, as the Minister of Public Security.  Earlier, a third military officer was placed as second in command in the state intelligence unit. The appointment of Salinas out of the armed forces to be in charge of internal policing and security matters was promptly criticized by the FMLN the BBC reports : "The choice of General Salinas is another step towards the dismantlement of the democratic and civilian doctrine behind our public security, and openly contravenes the peace accords and the constitution," the FMLN said in a statement. The FMLN argues that no member of the military should head the police, a force it says is defined as civilian in the constitution. Human rights groups also criticized the appointment according to the BBC: Director o
1 comment
Keep reading

January 20, 2012
An article on Salon.com today reports that the private equity firm of Republican presidential candidate Mitt Romney started with initial investors who were Salvadoran oligarchs with links to Salvadoran death squads.  Salon reports: A significant portion of the seed money that created Mitt Romney’s private equity firm, Bain Capital, was provided by wealthy oligarchs from El Salvador, including members of a family with a relative who allegedly financed rightist groups that used death squads during the country’s bloody civil war in the 1980s. The evidence in the article is tenuous at best. Investors in Bain Capital are related to a wealthy man who allegedly financed death squads along with Roberto D'Aubuisson. There is no evidence that Mitt Romney was ever aware of these connections. Why even mention this? The Salon.com article points out that Romney touts these investors as showing that he is a friend of Latin America: During his first presidential bid in 2007, Romney more th
1 comment
Keep reading

January 19, 2012
Remittances, the money Salvadorans living and working abroad send back to their families, rebounded in 2011.  Making up a sixth of the nation's economy, remittances are one of the most important economic drivers for El Salvador.  Remittances had fallen with the downturn in the US economy as many Salvadoran migrants were unable to find jobs.  According to Inside Costa Rica : The Central Bank of Reserve (BCR) of El Salvador reported on Wednesday that the country received 3.64 billion dollars in family remittances from abroad in 2011, 6.4 percent more than in 2010. The Bureau for Economic and Statistics Studies, attached to the BCR, said that in physical terms, that figure accounts for 217.9 million dollars more than in the previous year. Last year's family remittances accounted for about 16 percent of the country's Gross Domestic Product (GDP), said the BCR. Of the total family remittances, the banking system paid 74.1 percent to beneficiaries, equivalent to 2.7 billion
Post a Comment
Keep reading 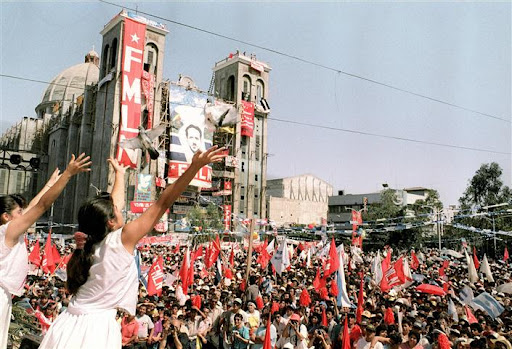 January 16 marked the 20th anniversary of the signing of the Peace Accords which ended El Salvador's bloody twelve year civil war.  You can read an English language version of the Peace Accords  here at the United States Institute of Peace . In a symbolic act, the official commemoration of the anniversary was held in El Mozote.   President Mauricio Funes apologized on behalf of the Salvadoran state for the massacres committed in December 2001 in El Mozote and surrounding communities.  He announced a series of community development initiatives in the El Mozote area. From the BBC: Mr Funes made his emotional apology on the 20th anniversary of peace accords that ended the nation's civil war.  The president travelled to El Mozote, some 200km (120 miles) from the capital, San Salvador, near the border with Honduras. "For this massacre, for the abhorrent violations of human rights and the abuses perpetrated in the name of the Salvadoran state, I ask forgiveness of th
1 comment
Keep reading

January 14, 2012
Here is my annual recap of the top stories of the past year. The Deluge of 2011 .   Torrential rains drowned El Salvador in October of 2011.    The downpours from Tropical Depression 12-E totalled as much as 58 inches in some spots.  These totals made the deluge of 2011 the worst flooding disaster in the country's history, exceeding Hurricane Mitch in 1998.        Although a good government response meant that "only" 35 persons died, the economic costs was enormous with   extensive damage  throughout the country.   Most concerning was the destruction of a significant percentage of the bean, rice and corn crops, raising the spectre of higher food prices and hunger before the next harvest.     Relief work continues, so please consider donating . The El Salvador Spring .    In a series of 4-1 rulings, the Constitutional Chamber of El Salvador's Supreme Court had been expanding the rights of citizens to vote at the expense of the entrenched political parties.  The p
Post a Comment
Keep reading

January 12, 2012
Whenever Al Jazeera English broadcasts a story about El Salvador, it's usually well done.   This week's video on the program Witness titled  Life in San Salvador  is no exception.   From the promo for the documentary on the Al Jazeera website: In the dusty, rubbish-strewn streets of Mejicanos, a working-class district of San Salvador, the capital of El Salvador, Father Antonio Lopez Tercero points to the gang graffiti scarring the walls. Gang violence is one of the defining features of life in El Salvador today.... "Life is worth nothing in this country," Father Antonio says. "There is so much impunity. Killing someone is like killing a chicken." 'Padre Toño', as Father Antonio is known, is one of many whose lives are affected by the violence. But he is also one of the few prepared to work with the gang members; seeing them not just as criminals, but as victims of a divided society. "It takes no effort at all to go from being
1 comment
Keep reading

January 10, 2012
A court in El Salvador has dismissed the prosecution sought for the killers of Salvadoran poet Roque Dalton . The revolutionary poet was killed in 1975 by fellow guerrillas. According to the Washington Post , the judge in San Salvador ruled that the time limit for prosecuting the murder would prevent now opening this case: The complaint named former Farabundo Marti National Liberation Front leader Joaquin Villalobos and Jorge Melendez, who serves in the current government as head of the civil defense office. Melendez denied the accusation. Villalobos, however, acknowledged that rebel leaders ordered Dalton killed, reportedly after colleagues accused him of treason and being a CIA agent. Judge Romeo Giammattei ruled Monday the 15-year limit on prosecution had passed. Prosecution of Roque Dalton's killers has long been sought by his sons, who point to this case as another situation of impunity where a crime of the past was never addressed. Justice should be blind to whe
3 comments
Keep reading 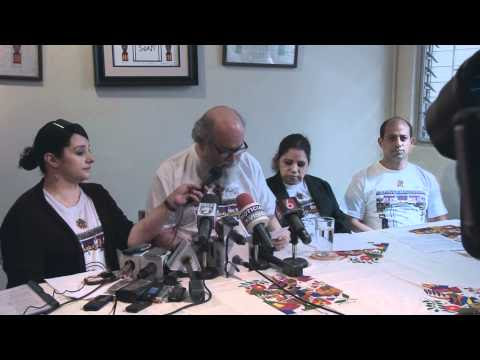 Press conference video With a quiet dignity, Fernando Llort made his first public statement about the destruction of his mural which had adorned the facade of the Metropolitan Cathedral. He spoke of the facade as the greatest work of his life and the destruction of the mural as the greatest sadness of his life. Llort says he accepts the apology of the archbishop and respects the church and its hierarchy. But despite that, he was still left with a deep pain and many questions. He repeated that this public work belonged not to him, or to the church, but to all Salvadorans. Llort had three requests. First, he requested that the church make a full and complete explanation of its study and reasons for destroying the mural rather than restoring it. Second, he asked that there be greater recognition in El Salvador of the value and respect due for the work of Salvadoran artists and artisans. Third, he asked that the church return to him the rubble from the tiles removed from
4 comments
Keep reading

January 02, 2012
In his weekly press conference on Sunday, San Salvador archbishop José Escobar Alas, answered questions about the removal of the mosaic by artist Fernando Llort from the facade of the Metropolitan cathedral. Monseñor Escobar Alas stated that the cathedral was in the midst of a project to paint and clean all the exterior and interior surfaces of the cathedral. When it came time to clean the mosaic, pieces were falling off. Many pieces had been discolored and damaged by the sun and the rain. Pieces of tile which had been damaged or discolored by the weather could not simply be replaced, because the new pieces would not match the existing ones. The archbishop said that following an analysis by the engineering and architectural firm working with the church, which concluded the restoring the mosaic was not possible, the decision was made to remove it. In his remarks, the archbishop went out of his way to commend the Ferndo Llort and his family for their dedication to Salvadoran s
5 comments
Keep reading
More posts