Showing posts from December, 2006
Show all

December 31, 2006
In April, a New York Times Magazine cover story focused on the criminalization of abortion in El Salvador. The article by writer Jack Hitt, titled " Pro-Life Nation ", focused on the situation in El Salvador where there are no exceptions where abortion is legal and where women may be prosecuted for having abortions. The article asserted that women had been sentenced to long prision terms for having an abortion. "Pro-Life Nation" received a great deal of publicity when it was published. I wrote about the Times piece on this blog on April 9. The Public Editor for the New York Times, responding to criticisms of the article, has disclosed today that Hitt may have gotten wrong some basic facts in the story: The cover story on abortion in El Salvador in The New York Times Magazine on April 9 contained prominent references to an attention-grabbing fact. “A few” women, the first paragraph indicated, were serving 30-year jail terms for having had abortions. That ref
1 comment
Keep reading

December 25, 2006
A tale of a song and dance which are part of Salvadoran family celebrations at Christmas, from our friend Carlos X. Colorado. MANO A LA BARRIGA Put your hand on your belly and celebrate the holidays Salvadoran style By: Carlos X. Colorado This may be hard for Americans to understand, but the most emblematic Christmas song in El Salvador is called "The Bullet" ("La Bala"). No, this is not a poetic statement about the current gang violence plaguing the country -- more on that, later. The simple fact of the matter is that Salvadoran holiday celebrations are typified by uproarious family gatherings that turn invariably to communal, familiar, inter-generational dancing. "La Bala" is a hit record that has been popularized all over Latin America, but is especially cherished in El Salvador, the land that produced the group that recorded the most popular version of the song. (San Vicente's own Orquesta Internacional los Hermanos Flores, the only Latin
3 comments
Keep reading

December 24, 2006
From the 1978 Christmas message of archbishop Oscar Romero: Along with you, my dear brothers and sisters, I too need to receive the good tidings tonight. As shepherd I must announce it, but as shepherd I must also be one of those shepherds of Bethlehem and receive from the angels the news that stirs our hearts. Let us receive it, you and I, with the same simplicity and humility as those shepherds did. The more simple and humble, the more poor and detached from ourselves, the more full oftroubles and problems we are, the more bewildering life’s ways, all the more must we look up to the skies and hear the great news: “A Savior is born to you.” And let us listen in chorus to that great news, sung throughout the universe: “Glory to God in the heavens, and on earth peace to those whom God loves.” December 25, 1978 Taken from The Violence of Love
Post a Comment
Keep reading

December 23, 2006
In recent weeks, two major Salvadoran banks have been sold to foreign banking interests. In the first transaction, US mega-bank Citigroup acquired Banco Cuscatlan . This sale was followed by the sale of El Salvador's largest bank, Banagricola, to Bancolombia , a financial institution based in Colombia.
1 comment
Keep reading

December 22, 2006
For the past week, a string of more than 40 small earthquakes has shook towns in Ahuachapán department. The government has declared a red alert because of the seismic activity. So far more than 1500 houses have been damaged , affecting more than 5000 people in the region.
Post a Comment
Keep reading

El Faro reports that the FMLN has decided to eliminate internal elections as a way to choose future candidates for the 2009 presidential and legislative elections. (I previously noted these plans in an April 2006 post which followed the party's weak showing in the legislative and municipal elections). At its recent convention, the party decided to eliminate the internal elections which had divided it in the past. There is not yet a proposal for how future candidates will be chosen, but this would appear to be a change which guarantees that the party will field another hard-line leftist candidate for president in 2009. That may not be the best way to change the FMLN's string of losses in every presidential election since the end of the civil war.
1 comment
Keep reading

The decline of agriculture in El Salvador

December 21, 2006
A new article from Raul Guttierez at the Inter Press Service describes the forces and policies which have led to the decline of agriculture in El Salvador's economy. The resulting economic shifts have had profound effects in the country, including a decline in exports, in the number of agricultural cooperatives, and in jobs available in the farm sector: El Salvador now exports labour power instead of products, in the form of mass emigration, said William Pleitez, a Salvadoran economist with the United Nations Development Programme (UNDP). "Agriculture has been one of the losers as a result of these policies, because in many cases, the effects have been the opposite of what was originally expected," he added. UNDP reports show that in 1978, 81 of every 100 dollars in foreign exchange flowing into the country came from traditional agroexport products, eight came from expatriate remittances, and the rest came from exports assembled in the "maquiladora" sector an
3 comments
Keep reading

December 16, 2006
Worth reading is Marcela Sanchez's column last week in the Washington Post. Sanchez talks about the fact that the almost $3 billion of remittances entering the country do little for economic development: Salvadoran immigrants are frustrated that their cash isn't reaping more development rewards back home. Although remittances have proved to be a lifeline to thousands of families in extreme poverty, immigrant Salvadorans fear that the money is creating a culture of dependency in the home country. With that background, Sanchez describes the US Millennium Challenge Accout grant of $461 million to El Salvador as a missed opportunity to leverage the flow of remittances into a source of economic development. The grant process did not include any provision for partnerships with Salvadorans abroad looking for ways to help development in their home country. While the MCC grant is substantial, it is still small compared with the size of the flow of remittances into the country.
6 comments
Keep reading

Today, December 11, is the 25th anniversary of the massacre at El Mozote. This event stands out as one of the worst atrocities of the civil war and was committed by U.S. trained troops of the Salvadoran armed forces. Following the war, the United Nations Truth Commission issued its report with this summary: "On 10 December 1981, in the village of El Mozote in the Department of Morazan, units of the Atlacatl Battalion detained, without resistance, all the men, women and children who were in the place. The following day, 11 December, after spending the night locked in their homes, they were deliberately and systematically executed in groups. First, the men were tortured and executed, then the women were executed and, lastly, the children, in the place where they had been locked up. The number of victims identified was over 200. The figure is higher if other unidentified victims are taken into account." The massacre was carried out by soldiers of the US-trained Atlacatl Batt
23 comments
Keep reading 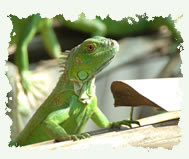 El Salvador is one of the largest breeders and exporters of iguanas in the world. La Prensa Grafica has a video at this link with scenes from iguana farms. Green iguanas are often imported from El Salvador as pets , but can also be raised for their meat . Visit the website of one iguana operation, Arauca, at www.iguanaselsalvador.com .
3 comments
Keep reading

December 08, 2006
From the IPS News Service comes a success story out of El Salvador about a cooperative selling organic, high quality coffee: COMASAGUA, El Salvador, Dec 4 (IPS) - "We need to produce more coffee, because our customers want more of it, the demand is greater than what we produce," José Antonio Sandoval, a Salvadoran small farmer and an expert on growing and selling organic, traditional, gourmet aromatic coffee, said with pride. Sandoval is a leader of the Santa Adelaida cooperative, aimed at protecting the environment by producing coffee without agrochemicals, while increasing income and consolidating social programmes for its members, who have historically been marginalised, have little education and are stunted by poverty. It's a perfect undertaking, an ideal match with their cooperative vision. ( more )
2 comments
Keep reading

More on Salvadorans' views about the economy

December 06, 2006
More polling results from the recent poll by the University of Central America: How much do you believe the cost of living has increased in El Salvador this year: None 2.5 Little 11.2 Some 10.3 A Lot 76.0 Of the following, which do you believe is the reason for the increase in the cost of living: Dollarization 55.2 Unemployment 20.2 Lack of government control of prices 12.1 Increase in petroleum prices 7.7 Other reasons 4.8 In general, do you think El Salvador is going down a good road, or does it need a change? Needs a change 87.4 On a good road 10.3 Don't know 2.3 Will CAFTA combat poverty, generate more poverty, or not have any effect? Generate more poverty 49.6 Will help combat poverty 24.5 Will not have any effect 22.8 Don't know 3.1 The answers to the foregoing questions suggest widespread disaffection for the policies of the ARENA government, but it is not at all clear that the public views the FMLN as the party to address these issues: During the present y
6 comments
Keep reading

December 05, 2006
A recent poll by the University of Central America, provides an insight into the pessimism most Salvadorans have about the situation facing their country and the government's efforts to deal with it. What are the principal problems facing the country? Crime -- 47% Poverty -- 14.9% Unemployment -- 11.6% Economy -- 9.1% Gangs -- 6.3% Dollarization -- 2.7% High cost of living -- 2% Corruption -- 1.5% The dominance of crime in the results is not surprising considering that more than 18% of respondents said they had been a direct victim of violent crime during 2006. The population's concerns about the direction of the country are directly impacting the approval ratings of president Tony Saca, who is now receiving the lowest ratings of his administration (5.67 on a 10 point scale), and 44.8% of Salvadorans believe he is governing poorly compared to only 30.8% who believe he is governing well. The poll also asked respondents to indicate which institutions and national actors the
1 comment
Keep reading

Reflection on slaying of Lutheran pastors

December 03, 2006
If you were one of the readers of this blg who were impacted by the murder of Pastors Francisco and Jesus Carillo, you will want to read the reflection of Stephen Deal, ELCA missionary, at this link .
1 comment
Keep reading

Four American churchwomen and a university in the same spirit

December 02, 2006
Today marks the 26th anniversary of the rape and murder of four American churchwomen -- Sister Ita Ford, Sister Maura Clarke, Sister Dorothy Kazel, and lay missioner Jean Donovan. 26 years ago today, nine months after the assassination of archbishop Oscar Romero, the women were captured, raped, tortured, and brutally murdered by members of the U.S. trained and financially supported Salvadoran armed forces. They joined the ranks of the martyrs of El Salvador's bloody civil war. Today I also received a copy of an appeal for the support of a project the churchwomen would have supported. Oscar Romero University is threatened with closure, and needs the support of persons around the globe. Here is the appeal from Peace International, sponsor of the university: November 2006 Dear Friends and Followers of Oscar Romero, We are writing to you because we are facing the threatened closure of the Monseñor Oscar Arnulfo Romero University , the only rural university serving the poor o
4 comments
Keep reading
More posts