Showing posts from February, 2017
Show all

No country for young hippopotamuses 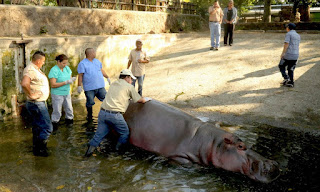 A guest post by friend of the blog, Carlos Colorado Occasionally, something happens in El Salvador so horrendous that it provokes widespread indignation and soul-searching for the constantly-tested yet surprisingly tender Salvadoran psyche.  Such has been the case with the news that Gustavito, the 15 year-old hippopotamus of the San Salvador zoo, was attacked by unknown aggressors with icepicks, metal bars and stones in the wee hours of Thursday, February 23.  He died from his injuries this past Sunday evening. One of many editorials decrying the incident declared El Salvador “The land of eternal shame,” and questioned the moral fabric of a society wherein such an event occurs.  The editorial lamented that “not only did Gustavito have to live like a Salvadoran, amid a great scarcity of resources, but he had to die murdered in the middle of that spiral of hatred, violence and blood that has accompanied us for almost four decades—first, the Civil War violence, then the social v
Post a Comment
Keep reading

February 28, 2017
Each month El Salvador receives more than 4000 of its citizens who have been deported.    According to government statistics , during 2016, El Salvador received 52,548 deported Salvadorans, of whom 21,340 were deported by the US and 31,147 from Mexico.    These numbers represented an increase of 1.5% from the prior year.     The greatest numbers of deportees were originally from the departments of San Salvador, Usulután and San Miguel.   Salvadoran officials estimate that 300 Salvadorans per day try to emigrate in undocumented fashion towards the US. El Salvador's Legislative Assembly recently approved a monthly budget of $5.2 million to try and attend to the needs of deportees in the face of predictions of a large increase in their numbers under the Trump administration. The Los Angeles Times has a long story looking at these deportees and how increasing numbers might impact El Salvador titled  Meet El Salvador's growing middle class: Deportees from the U.S.     The articl
Post a Comment
Keep reading

February 26, 2017
Although El Salvador currently has a moratorium on gold mining imposed by the executive branch, and the country won an international arbitration with gold mining company Oceana Gold, activists have not stopped the fight to keep gold mining companies out of the country. Oceana Gold has not yet paid the $8 million judgment against it for the costs incurred by the government of El Salvador in the arbitration.   280 national and international environmental and solidarity organizations recently released a letter demanding that Oceana Gold pay up and move out. Meanwhile, the National Assembly has still failed to pass a law to prohibit metallic mining in the country.    Passage of such a law is one of the major goals of the environmental movement in El Salvador.    The Roman Catholic church has added its voice to those calling for the mining ban. With so many forces aligned against gold mining, even without the passage of a law I see little chance that any mining company will set it
Post a Comment
Keep reading

February 25, 2017
Time magazine has a long article up on its website titled  How Trump's Deportation Crackdown Could Sink El Salvador .    The article suggests that tens of thousands of deportees arriving in a country with high unemployment and high crime rates could magnify those problems, while at the same time crucial family remittances would be in decline. The article does include an interesting counterpoint from San Salvador mayor Nayib Bukele: Not everyone believes that the return of migrants is a bad thing, however. San Salvador Mayor Nayib Bukele says those who dared to leave are the kinds of people El Salvador could benefit from creating wealth at home. “People that immigrate are dreamers, strong, entrepreneurs, people that want to succeed, people that are willing to go through a desert, to risk their lives, to be deported, to work double shifts,” he told TIME. “Imagine those people working here, making our country produce more.” I'm not sure that I agree with the mayor, however.
Post a Comment
Keep reading

February 22, 2017
Propelled by conversions to evangelical Christianity, some gang members are renouncing their former lives and quitting the gangs.   It is a phenomenon which is most pronounced in the San Francisco Gotera prison in northeast El Salvador. From Revista Factum , as translated into English for InsightCrime : It's happening in the streets, in the communities still controlled by gangs, and in the segregated prisons. It's a phenomenon which, despite being hard to believe at first, has been recognized by prison authorities: Hundreds of gang members are abandoning and outright rejecting their gangs, opting instead for the teachings of evangelical churches. In Gotera prison, close to 500 members of the Barrio 18 have retired from gang life and are now saying that they have no relation with the group....  Montano, who left Gotera a little more than three months ago, remembers it like this: "That was the explosion. That was the bomb that went off in the prison. Because it was a s
Post a Comment
Keep reading

Noe Canjura -- from Apopa to Paris 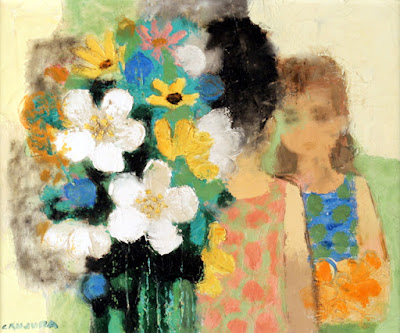 “Le dormeur cache” by Noe Canjura This past weekend a colonia in municipality of Apopa named for Noe Canjura celebrated a cultural festival and block party. The event featured music, art, food and conviviality.  But who was Apopa's most famous son, Noe Canjura?   From Wikipedia : Noe Canjura was born in 1922 in Apopa, to a family of landless peasants of humble origin. By the time of his death, he was recognized as one of the leading landscape, still life, and figure painters of France.  As a youth, Canjura was raised in intimate contact with the struggle of wrestling a livelihood from the infertile soil of his native village.  To pay part of his expenses and to lighten the weight of the sacrifices his father made to keep him in school, Canjura worked in a sawmill and often spent the night there, sleeping on bare boards.  His talent for drawing came to light when he was seventeen years old and, without knowing how or why, his adventure in the art world began. He first
Post a Comment
Keep reading

February 18, 2017
The New York Times has a photo essay titled Unearthing Justice in El Salvador and accompanying blog post on its website  regarding the open historical wounds of 1981 El Mozote massacre.    The photos tell the stories of families having a chance to finally put to rest their murdered loved ones and still seeking justice.   There is an ongoing search for justice, but we cannot tell whether and how that search might be completed.
Post a Comment
Keep reading

February 16, 2017
The Los Angeles Times today has a story about a Salvadoran teenager threatened with death by gangs in El Salvador.  This young man was granted refugee status under the Central American Minors programs commenced by president Obama and was ready to come to the US and safety on February 9.   Then President Trump intervened with his executive order suspending refugee admissions to the US.     This young man would have been stuck in El Salvador where gangs promised to cut him into pieces, but was saved by a federal court injunction blocking Trump's executive order.   He boarded a plane for the US before Trump could try to cut off refugees once again. Trump's orders have life and death consequences.   Luckily a federal court was there to strike this one down and probably save more than just one life.
Post a Comment
Keep reading

A less violent January and the path forward

According to statistics from El Salvador's National Civilian Police , the number of murders in the the first month of 2017 dropped to 256, compared with 484 violent deaths in a very bloody January 2016. That represented an average daily murder rate of 8.3, and the country enjoyed its first day without any murders in quite some time.    The country is currently debating two questions.   First, will there be an extension of the "exceptional measures" put in place at the end of March 2016?   Those measures include increasingly harsh conditions in the prisons aimed at isolating imprisoned gang leaders as well as more and more aggressive police and military tactics in the communities.  The government credits these measures with bringing down the homicide rate.  The legislative assembly is debating whether to approve an extension to those exceptional measures, which would appear likely. The second question is whether the government will respond favorably to a propo
Post a Comment
Keep reading
More posts