Showing posts from January, 2010
Show all

January 30, 2010
January 22 was the 78 year anniverary of an event in El Salvador known simply as "la Matanza" -- the Massacre. Following an armed uprising of campesinos in January 1932, many of whom were indigenous, the Salvadoran armed forces massacred as man as 30,000 in reprisal. This week, indigenous communities remembered the slaughter, as reported in Upside Down World : The killing, led by former President General Maximiliano, left almost thirty thousand dead, "the majority of whom were indigenous -who probably did not know [that the government considered them] communists- thus destroying much of a culture that now demands justice and recognition," says Montoya. "After this massacre, the Indian community was greatly reduced in the country, many of them changed their habits for fear of being killed and many customs gradually waned into oblivion" recounted the spiritual guide "Tata" Juan. 78 years later, in a place known as "El Llanito" wher
4 comments
Keep reading

January 25, 2010
The horrible devastation from the earthquake in Haiti necessarily prompts one to reflect on El Salvador's vulnerability to a similar event. Over the past 60 years, El Salvador has been hit by five earthquakes, which collectively have killed more than 2500 Salvadorans and destroyed the homes of hundreds of thousands. From USGS: * May 6, 1951 - Magnitude 6.2 - Fatalities 400 * May 3, 1965 - Magnitude 6.3 - Fatalities 125 * October 10, 1986 - Magnitude 5.5 - Fatalities 1,000 * January 13, 2001 - Magnitude 7.7 - Fatalities 852 * February 13, 2001 - Magnitude 6.6 - Fatalities 315 The most recent earthquake to shake the country and Guatemala was felt on Monday, January 18 , when a tremor of magnitude 6.0 in Guatemala could be felt in El Salvador, shaking nerves but causing no damages. Taking measures to mitigate the risk of a catastrophe like Haiti requires resources and attention. Unfortunately, El Salvador's limited resources and perhaps a lack of political w
2 comments
Keep reading

January 21, 2010
El Salvador's foreign minister, Hugo Martinez, wrote an essay this week titled El Salvador's new vision to the world published in the Miami Herald. Here's an excerpt: The concept of change extends to our foreign policy, which will be guided by our nation's interests, and certainly not the interests of any group, be it economic, political or ideological. Our priorities will be bilateral and multilateral relations in the new world order, respect for international law and human rights and the unwavering and comprehensive battle against organized crime in the region. For El Salvador, a country that wants to find friends in the world, diversity of thought in the Americas is an advantage. We want to open our frontiers to bind our friendship among peoples and nations. In that path we hope to have the same respect that we offer. We recognize the leadership of President Barack Obama In the international domain. From our government's first contact with him at the Fifth S
Post a Comment
Keep reading

January 17, 2010
In a ceremony commemorating the 18th anniversary of the signing of the Peace Accords which ended El Salvador's civil war, the government has apologized for the human rights violations committed by state actors during that conflict. From the BBC : President Mauricio Funes made the first formal apology by one of the country's presidents since the end of the conflict in 1992. He said the right-wing authorities who governed the country at the time had committed grave human rights abuses. He also said they had violated the country's constitutional order. "In the name of the state of El Salvador, I ask for pardon," said the president, speaking at a ceremony on the 18th anniversary of the end of the conflict. Those words - the first of their kind since the end of the war by a Salvadoran president - will be welcomed by the families of the more than 75,000 people who died in the conflict. However, Mr Funes, who represents the party of the former Marxist FMLN rebel
8 comments
Keep reading

January 16, 2010
Salvadoran president Mauricio Funes has made it clear that, notwithstanding multi-million dollar arbitration claims by gold-mining companies, the current Salvadoran government is not going to grant mining permits. From CISPES : SENSUNTEPEQUE, EL SALVADOR – Speaking at a ceremony marking the start of the school year on Tuesday, Salvadoran President Mauricio Funes made his most explicit statement yet against the mining of precious metals in El Salvador, declaring “There can be no misunderstanding: my government will not authorize any mining extraction projects.” Funes cited environmental and health concerns in reaffirming the government's refusal to grant extraction permits for various projects around the country, including the proposed El Dorado mine, owned by Vancouver, B.C.-based Pacific Rim Mining. “No one has convinced us that there are ways to extract minerals and metals, especially metals, without contaminating the environment and affecting public health,” Funes stated. “We
2 comments
Keep reading

Former Senator and US presidential candidate John Edwards has been in El Salvador several times recently. No longer campaigning for votes, Edwards is building houses in poor communities with the Fuller Center for Housing and Homes from the Heart. From the Fuller Center for Housing website : Edwards' visit from Dec. 15-18 coincided with students volunteering for alternative winter break - 13 from UCLA and 14 from the University of Cincinnati. "I have never done anything in my life that is worth more to me than what you are doing right now," Edwards told the students. "This is what you will remember, I promise you. I've had every life experience anybody could ever have, meeting presidents ... being on aircraft carriers ... and nothing compares with this." You can see a video of Edwards' talk to the college students and his work on the houses at this link .
2 comments
Keep reading Last week I pointed out Tim Lohrentz' blog The Indigenous History of El Salvador , with information about El Salvador's early indigenous peoples. We are learning more about these ancient inhabitants of El Salvador through archeological excavations, such as the one at Cihuatán. There is a website for those excavations which describes what archeologists are finding there: A thousand years ago a giant metropolis flourished in what is now El Salvador, rising from the ruins of Maya civilization. The city of Cihuatán has long remained Central America's least known and most spectacular treasure. Now an archaeological project will attempt to unlock its secrets. This web site will document what we find, as we find it. Whether you hope to visit Cihuatán yourself, or only to follow our progress on-line, join us as the project unfolds. The project at Cihuatán is a joint project of El Salvador's National Foundation for Archeology and San Francisco State University. At th
Post a Comment
Keep reading

January 09, 2010
This blog was recognized today as one of the three best blogs about El Salvador for 2009. The recognition came from Blogotepeque.com, a popular group blog and website. The top two blogs were the blogs of Neto Rivas and Hunnapuh , and I can certainly agree with naming those two blogs as the best about El Salvador.
6 comments
Keep reading

Report on Salvadoran immigrants in the US

January 06, 2010
Pacific Rim, the gold mining company which has sued El Salvador over the government's failure to grant it mining permits, has put a statement on its website regarding the recent murders of environmental activists in Cabanas: January 04, 2010 STATEMENT REGARDING RECENT EVENTS IN EL SALVADOR Pacific Rim Mining Corp. and its subsidiaries (collectively, "PacRim") are environmentally and socially responsible gold mining and development companies with significant assets in El Salvador. PacRim has recently been the target of false accusations made by certain anti-mining groups, which wrongfully suggest PacRim's involvement in a series of murders in the area of Trinidad, El Salvador. PacRim unequivocally denies these accusations. PacRim has no knowledge in relation to the Trinidad murders other than what has appeared in the mainstream Salvadoran press, which reports that these tragic incidents are apparently related to a longstanding feud between two local families. Mo
4 comments
Keep reading

The Indigenous History of El Salvador

January 05, 2010
Blogger Tim Lohrentz has begun writing a blog titled The Indigenous History of El Salvador , which is described as "A look at the Chorti, Poton Lenca, and Pipil peoples of El Salvador, perhaps the birthplace of the Mayans, as well as recognizing the indigenous spirit in the struggle for social justice today." Lohrentz' post from New Years Day describes the legends of ancient Mayan religion: Transforming the Gods The beginnings of the Mayan religion were tumultuous. As the Chortis, the Mayans along the Pacific Coast, became more adept at agriculture - hybridizing corn, beans, and squash, and introducing yuca (manioc), peanuts, and cacao from areas to the south - adoration was given to Mother Earth, ix , who provided all good things. The Chortis named corn, ixim , which means something similar to 'fruit of Mother Earth'. Corn came from teosinte, ixim ka , 'wild fruit of Mother Earth'. But as people ate more corn, a disease appeared (pellegra - a niacin
Post a Comment
Keep reading

January 03, 2010
An article this week from the Miami Herald talks about remittance flow into El Salvador and other Central American countries. One of the concepts in this article is using remittance flow to establish a financial history which will let families take out loans to support small businesses in the home country: Technoserve was founded by a Connecticut businessman in 1968 who was inspired after volunteering at a hospital in Africa. The group's Salvadoran pilot program helped remittance receivers draw up business plans and worked closely with Washington-based Microfinance International Corp to detail remittance histories of immigrants and their families, Ionnone said. ``The idea is to create a so-called transnational loan,'' Ionnone said. ``We can transfer the creditworthiness of a person in the U.S. to a person in a place like El Salvador.' ( more )
Post a Comment
Keep reading 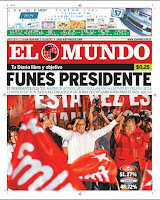 My annual roundup of the top stories from El Salvador during the last year. Election of Mauricio Funes . On March 15, Salvadorans went to the polls and elected their first president from a left-wing party, Mauricio Funes. The election, 17 years after the end of El Salvador's bloody civil war, was peaceful and fair. Funes, the former television journalist ran as the candidate of the FMLN, but consciously distanced himself from the hard-liners in that party, even his running mate Salvador Sanchez-Ceren. At the end of the year, Funes continues to enjoy extraordinarily high approval rating s. Divided government produced by National Assembly and municipal elections . The first round of national elections in January 2009 elected deputies to the National Assembly and mayors in every municipality. The mayor's office in San Salvador switched from the FMLN to ARENA as the incumbent FMLN mayor, Violeta Menjivar, was defeated by Norman Quijano. While the FMLN had the most
1 comment
Keep reading
More posts