Showing posts from July, 2016
Show all

A teeny tiny US response

July 27, 2016
The US is taking a tiny step forward towards treating Salvadorans and other Central Americans fleeing gang violence. As reported in the Tico Times : The governments of the United States and Costa Rica announced Tuesday that Costa Rica would begin hosting Central American refugees applying for asylum in the United States and other countries as part of a protection transfer arrangement with the U.N. refugee agency, UNHCR, and the International Organization for Migration. As many as 200 refugees at a time from El Salvador, Guatemala and Honduras — the so-called Northern Triangle — will be allowed to stay in Costa Rica for up to six months while they are processed for potential asylum in the U.S. or elsewhere, UNHCR chief in Costa Rica Carlos Maldonado told reporters during a news conference at Casa Presidencial in San José on Tuesday. The U.S. State Department announced the agreement in a news release . Working with the UNHCR and the IOM, the United States will pre-screen “vulnerab
Post a Comment
Keep reading

With the amnesty law gone, what next?

July 26, 2016
Following the invalidation of El Salvador's 1993 Amnesty Law, many are wondering what happens next.   While many assume that there should be prosecutions of such infamous war crimes as the El Mozote or Rio Sumpul massacres, the form of such proceedings is far from certain.  El Salvador's courts seem ill-equipped for the job, and the country's chief prosecutor is not exactly showing an eagerness for the possible challenges ahead.   From the New York Times : However, there appears to be little political will in El Salvador to revisit a painful chapter of its history in courtrooms. Politicians across the political spectrum have questioned the viability of war crimes tribunals at a time when the country’s judicial institutions are overwhelmed by endemic gang violence. President Salvador Sánchez Cerén warned that the ruling threatened the “fragile coexistence” that binds Salvadoran society.  His concern has some merit. Politicians may be tempted to use the case to settle p
1 comment
Keep reading

FMLN takes to the streets after Constitutional Chamber decisions

July 20, 2016
The Constitutional Chamber of El Salvador’s Supreme Court recently made headlines on this blog and around the world when it vacated the1993 Amnesty Law .  At the same time that the Constitutional Chamber was issuing that decision, the Chamber issued two other decision which are not as headline-grabbing internationally, but have provoked a deep conflict between El Salvador’s executive branch and the governing FMLN and the Chamber. In the first of the two decisions , the Constitutional Chamber ruled that the approval of $900 million in government bonds by the National Assembly was unconstitutional.   The bonds were intended to provide funding for Plan El Salvador Seguro, the government’s broad-ranging public security measure. The $900 million in bonding originally failed to pass by one vote of the super majority needed to approve such borrowing.   The measure was then removed from the legislative calendar and sent to archive.   Later that night, the GANA deputy who had abstaine
Post a Comment
Keep reading 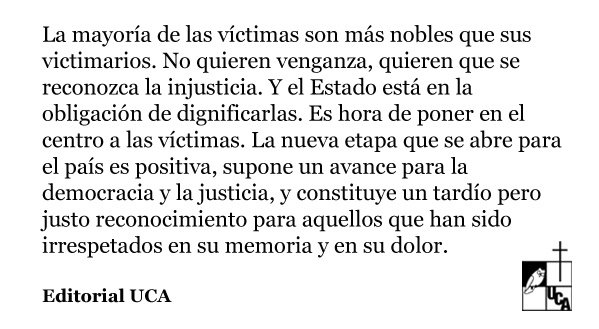 There has been a great deal of reaction to the decision of the Constitutional Chamber of El Salvador's Supreme Court which invalidated the 1993 Amnesty Law .   Human rights adocates praised the decision.   Former generals scorned it.  And the country's president, a former guerrilla commander himself, criticized the decision.   Here is a sampling of the reactions. Benjamin Cuellar , former director of the human rights institute at the University of Central America and one of the petitioners in the lawsuit was quoted in El Pais saying: Este es el primer paso que llevará a El Salvador a la verdadera reconciliación; para que las instituciones funcionen y que se lleve a la justicia a quienes cometan delitos, independientemente de quienes sean.  This is the first step that will take El Salvador to true reconciliation; so that the institutions work and bring to justice those who commit crimes, regardless of who they are. David Morales , the current human rights ombudsman (P
4 comments
Keep reading

July 13, 2016
The Constitutional Chamber of El Salvador's Supreme Court announced this evening that it had declared unconstitutional the application of the 1993 post war amnesty law to prevent the prosecution of war crimes committed during El Salvador's civil war.    This ruling opens the door for possible prosecutions of crimes against humanity in a war in which more than 75,000 civilians were killed between 1980 and 1992. The amnesty law was: the central legal deterrent to seeking government-sanctioned investigations and justice. Passed March 20th General Amnesty Law for the Consolidation of Peace was the second amnesty law passed following the peace accords. The Salvadoran legislative assembly passed an initial amnesty law entitled the National Reconciliation Law on February 23, 1992. While the law extended amnesty to those who had committed political crimes during the war, it noted the importance of victims being able to clarify what happened to their family members and explicit
1 comment
Keep reading

July 11, 2016
In El Salvador, the police are killing ever growing numbers of alleged gang members in confrontations.   But such deaths are not just the result of blazing gun battles -- they also include death squads with off duty policemen operating in the country and summary executions of young men captured by the police or armed forces. InsightCrime described the growing number of deaths in reported shootouts between police and gang members: El Salvador's attorney general cautioned security forces against turning the country into the "Wild West" as authorities reported a string of shootouts that ended with eight gang members dead and a report surfaced indicating a spike in killings with multiple victims.  Authorities said eight alleged gang members died on July 7 in reported shootouts with police, La Prensa Grafica reported. The paper quoted National Civil Police (Policia Nacional Civil - PNC) Director Howard Cotto as saying 4 armed individuals were killed after allegedly tryi
2 comments
Keep reading 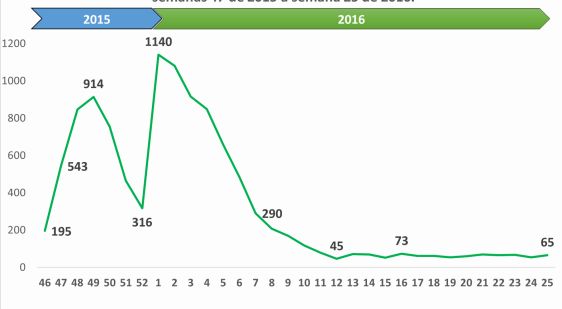 In the first two months of 2016, El Salvador appeared to be in the grips of the Zika virus and the country's minister of health went as far as to suggest that women not get pregnant for the next two years because of the risk of Zika-related birth defects. Five months later, there has been a dramatic reduction in the incidence of new suspected Zika cases in El Salvador according to statistics from the ministry of health .   The chart below shows weekly new suspected cases of Zika in El Salvador:  Certainly the Zika virus still poses a risk in the country.   Mosquito-borne illnesses like dengue and chikungunya are endemic in El Salvador.    But the drop in incidence of Zika should provide comfort to people who were considering altering plans to travel to El Salvador as a result of the virus.
1 comment
Keep reading

Perils of agriculture in El Salvador

July 07, 2016
Two recent articles highlight some of the health risks faced by workers in agriculture in El Salvador. One source of death an injury is pesticide use in Salvadoran agriculture.   According to a report in La Prensa Grafica , El Salvador's ministry of health estimates there have been 831 deaths and 7,982 poisonings of farm workers just in the five years from 2011 through 2015.   The ministry urged the country's legislators to ban a list of 53 agro-chemicals, a request which has been stalled in the National Assembly for years.   The executive branch of the government has restricted 36 of the chemicals, but a ban needs to be placed into law.   The ban is opposed by El Salvador's farm sector.  Even with the restrictions on 36 chemicals, 115 rural workers died and 1114 were poisoned during 2015. Another article comes from alJazeera, titled  Murder and malady: El Salvador's sugarcane workers , The article looks at the incredibly tough lives of El Salvador's sugar can
1 comment
Keep reading

The homicide rate is usually discussed as the measuring stick of the level of criminal violence in El Salvador. The first half of 2016 closed with 3052 homicides through June 30.    At first, it might appear that the country is well on its way towards another record bloody year like 2015 when there were 6657 homicides in twelve months.   But while homicide rates remained extremely high in the first quarter of the year, in the past three months the homicide rate has dropped to more historically "normal" levels. Here are the statistics.    This first chart shows annual homicide totals from 2011-2016: The years of the tregua , or gang truce, in 2012 and 2013 show the clear reduction in homicides while 2015 stands out for the very high number of murders. The same information appears in the following chart but calculated as average monthly homicide totals.    The first two quarters of 2016 are calculated separately to show the dramatic drop in homicides since the
Post a Comment
Keep reading

Supporting the "Ni-Nis" of El Salvador

July 03, 2016
The government of El Salvador has announced that it is going to target millions of dollars at the “Ni-Ni” population of El Salvador. “Ni-Ni” refers to those young people who are neither in school nor studying. (Ni estudian, ni trabajan). The program will include job-training and economic support for targeted youth, with a goal of eventually creating employment for 15,000 youth. The government is using funding designated for violence reduction efforts, arguing that the creation of job opportunities for young people is essential for reducing the problem of criminal violence in the country. The Ni-Ni support program is being roundly criticized by conservative ARENA politicians and business interests who assert it is just a populist subsidy which will not generate employment. They would prefer that the government stimulate the economy to create jobs, which they say will provide greater opportunity for youth. El Salvador’s Roman Catholic archbishop, in contrast, has prais
Post a Comment
Keep reading

Marco Rubio and the FMLN

Florida Republican Senator Marco Rubio made headlines in El Salvador this weekend for remarks he made in front of the Senate Foreign Relations Committee.  The former Republican presidential hopeful accused senior FMLN party leader Jose Luis Merino of money laundering and arms smuggling: You have the right hand man of the president of El Salvador, Jose Luis Merino.   This guy is a top notch, world class money launderer, arms smuggler for the FARC, hundreds of millions of money laundering for the FARC as well as corrupt Venezuelan officials, why is this guy not sanctioned? You can watch the video of Senator Rubio's remarks here . His comments about Merino come at approximately the 3 minute mark in the video: Rubio seems to be referring to some stories about Merino which surfaced more than 8 years ago and attempted to establish links between Merino and the FARC guerrillas in Colombia after a laptop computer was captured from the FARC.   From time-to-time , conservative
Post a Comment
Keep reading
More posts