July 06, 2016
The homicide rate is usually discussed as the measuring stick of the level of criminal violence in El Salvador.

The years of the tregua, or gang truce, in 2012 and 2013 show the clear reduction in homicides while 2015 stands out for the very high number of murders.

The same information appears in the following chart but calculated as average monthly homicide totals.    The first two quarters of 2016 are calculated separately to show the dramatic drop in homicides since the beginning of April 2016: 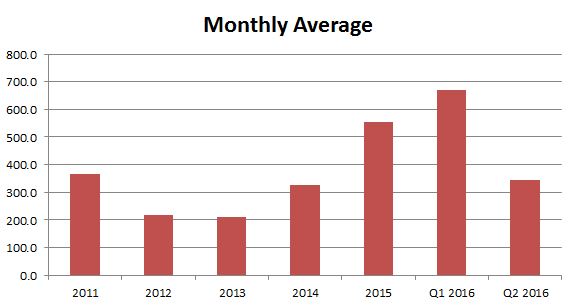 The actual month by month totals from January 2011 through June 2016 are shown in the following chart:

There are two competing explanations for the drop in homicide levels in the second quarter of 2016.  As the Associated Press reports:

The government attributes the drop to a tough military counteroffensive against the country’s powerful gangs, deploying a special security force and transferring imprisoned organized crime leaders to a maximum-security lockup to isolate them.

But the gangs also claim credit. The three main groups — the Mara Salvatrucha, Barrio 18 Revolucionarios and Barrio 18 Surenos — forged a nonaggression pact in March to try to reduce the killings. In a joint video message, they said their aim was to convince the government that the crackdown was unnecessary.....

“The reduction in homicides is due to the effectiveness of the plans by police and the extraordinary measures by the government, especially inside prisons” national police chief Howard Cotto said last week.

Authorities say isolating jailed gang leaders makes it harder for them to issue orders to their underlings out on the streets.

“We have gradually been bringing the penitentiary system under control and we are going to finish the job,” Vice President Oscar Ortiz said recently.

The gangs see things differently. A senior member of one, the Barrio 18 Surenos, told The Associated Press that the killings have fallen because gang leaders ordered their street soldiers to stand down.

“When we have wanted war, we have waged war on them, and right now we are not thinking that way,” the gang member said, speaking on condition of anonymity to avoid being targeted by authorities. “We want things to be solved in a different way.”


It seems likely that both factors are at play -- both the government's "exceptional measures" and the gangs' attempts to coordinate a reduction of killing each other -- these may have combined to cut the number of murders in half.    But in no sense can anyone assume that the current state of affairs will last.   Murders in the first four days of July had already claimed 57 lives.
Crime and violence Gangs