Showing posts from May, 2021
Show all

A possible Bukele speech -- with footnotes 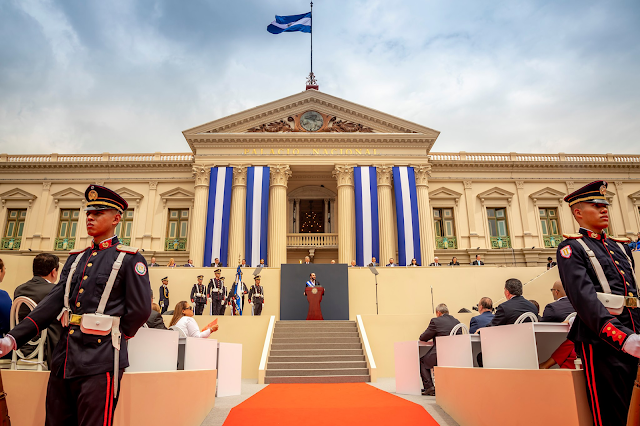 Tomorrow, June 1, 2021, marks the start of Salvadoran president Nayib Bukele’s third year in office.  He will appear before the Legislative Assembly, a body now dominated and controlled by his Nuevas Ideas party, to provide an account of the state of the country and his presidency to the citizens of El Salvador. It will be a presentation filled with pomp and circumstance in keeping with Bukele's preference to showcase the majesty of his presidency, while still maintaining his image as the president "most cool" in all the world.  There will be enthusiastic applause by the new members of the Assembly from Nuevas Ideas.   I predict that some of the messages we will hear in the speech will include: • The country is managing the coronavirus better than almost anyone else in the world. [note 1] • The homicide rate is down dramatically as a result of our Territorial Control Plan.[note 2] • The Salvadoran military are heroes of the country.  They have been patrolling the st
Post a Comment
Keep reading

May 29, 2021
Some of the recent news from El Salvador. 1.  Stories continue to emerge about a mass grave found at the home of an ex-policeman in Chalchuapa.  Exhumations have revealed that there may be dozens of bodies.   Whether the killings are the work of a single psychopath, an organized group, or some other network is not yet clear.   What is clear is that El Salvador has a great number of families whose loved ones have disappeared, and a grisly discovery like this one produces the hope/fear that the daughter or son for whom they have been searching might be located.  Details here:   A Mass Grave Was Discovered in a ‘Psychopath’ Ex-Cop's Well  (Vice World News) El Salvador police arrested an ex-officer for two murders. Then they found a mass grave of women in his yard.  (Washington Post) 2.  Bertha María Deleón was summoned to the Attorney General's office to hear various charges against her.  Deleón is a prominent criminal defense attorney in El Salvador, whose clients included Nayib
Post a Comment
Keep reading

This month relations between the United States and El Salvador have hit lows not seen in the past twenty years.  The deterioration comes as the Biden administration in Washington begins to put an emphasis on combatting corruption, human rights and good governance -- an emphasis lacking under Trump. This new emphasis has taken concrete form in Washington's reaction to president Nayib Bukele's May 1 sacking of top judges and the attorney general. The condemnations coming from Washington are vociferously rejected by Bukele who claims all the changes are justified by his party's electoral mandate after dominating legislative elections in February. From May 11 to 12, Joe Biden's special envoy to Central America, Ricardo Zúñiga, visited El Salvador for the second time.  (On his first visit in April, Bukele refused to meet with him).  After meeting with political leaders including the Salvadoran president, Zúñiga went on Salvadoran television to announce that while his visit
3 comments
Keep reading

Last night president Nayib Bukele of El Salvador published a long series of tweets containing his political thought behind the recent actions of his government and responding to his critics inside and outside the county.   Here is an English translation: The owners of the Latin American “fincas”, those who enjoy historical privileges, designed systems that would protect them forever and only the managers and the foremen exchanged throughout the decades. That's why nothing ever changes, that's why every "choice" ends in disappointment. Any people who aspire to change, who dream of getting out of underdevelopment, who want a better quality of life, must clean their house and defeat the system imposed and jealously protected by all the powers that be. That is the most difficult task of all. Why is it the most difficult? Because it is not protected only by them, their employees, media arms, unions, think tanks, NGOs and spokespersons, but by an ideological apparatus tha
Post a Comment
Keep reading

A big lift up in El Salvador

There are many challenges to life in the numerous marginalized communities in and around San Salvador.  Poverty, gangs, gender-based violence, lack of safe spaces, and more, combine to afflict the physical, mental and emotional health of the inhabitants of those areas.     One unique start-up program that seeks to address these issues in a holistic fashion is Pesas y Poder   (Weights and Power) -- a "powerlifting for empowerment" initiative, working through the disciplines of fitness and strength, and the safe space of a community gym.  The goals of Pesas y Poder are to promote gender equity, community empowerment, and healing from trauma through the practice of strength sports in El Salvador.  From the program's website : To serve this purpose, Pesas y Poder develops and delivers fitness and leadership curriculum to Salvadoran people of all genders and ages. We provide powerlifting instruction at a community gym for marginalized neighborhoods on the outskirts of San Sa
1 comment
Keep reading

May 10, 2021
This article originally appeared on the website of InsightCrime with the headline  Pandemic Spending Immunity Deepens El Salvador Corruption Concerns . By Alex Papadovassilakis With a new law granting immunity to El Salvador officials accused of mismanaging coronavirus funds and the resignation of a prosecutor looking into pandemic-related spending, President Nayib Bukele and allies are wasting no time undermining a major corruption investigation aimed at his administration. The National Assembly has approved legislation that makes it impossible to scrutinize direct purchases related to the pandemic and shields officials from corruption allegations linked to acquiring COVID-19 supplies. The law, submitted to congress on Bukele’s instruction, was approved May 5, just days after congress voted to oust the country’s Attorney General, Raúl Melara, who in November 2020 had launched a criminal investigation into irregular purchases made by Bukele officials using emergency funds. Bukele’s
Post a Comment
Keep reading 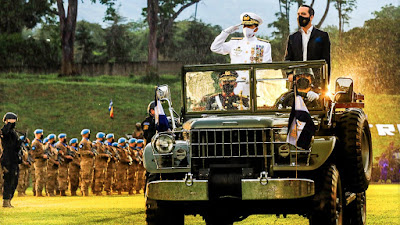 A week ago, the legislative super-majority held by the president’s Nuevas Ideas party and its allies removed from office top magistrates of the Constitutional Chamber and the attorney general.  This post gathers some of the coverage of those events and the international reaction in the English language press. The events of last Saturday are broadly described as a consolidation of power by Nayib Bukele over the judicial branch resulting in the elimination of check and balances and breaching the separation of powers. Bukele's Legislative Assembly Ousts Supreme Court Magistrates and Attorney General (El Faro, May 2, 2021) A presidential power grab: El Salvador’s parliament sacks the country’s top judges (The Economist, May 6, 2021)   El Salvador's parliament removes checks and balances on President Bukele's powers (Eddie Galdamez in Global Voices, May 5, 2021) Many voices expressed concern that El Salvador was seeing an autocrat consolidate power. This Is How a Re
Post a Comment
Keep reading 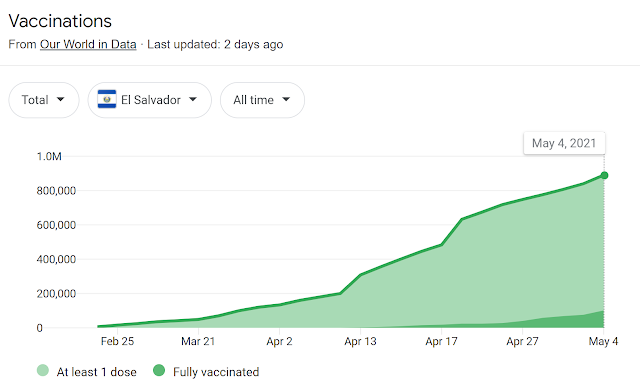 El Salvador hit a milestone today as it passed 1 million doses of coronavirus vaccine administered to the country's residents.   The Salvadoran government has been acquiring a variety of vaccines to administer to the population:   2 million doses purchased from Astra Zeneca, 2 million doses purchased from CoronaVac,  4.4 million doses purchased Pfizer/BionTech  150,000 doses of CoronaVac donated by China 181,000 doses through UN Covax program (Pfizer and AstaZeneca)  The healthcare ministry has been giving shots at a steady pace above 40,000 doses per day El Salvador's vaccination rate of 13.7 % of the population having received at least one dose compares to the worldwide rate of 7.2% according to Our World in Data .  Among countries in the Americas,  El Salvador ranks in the middle of the pack for percentage of population with at least one dose received.  It is worth noting, however, that second doses appear to be trailing first doses by a considerable amount, El Salvador do
Post a Comment
Keep reading 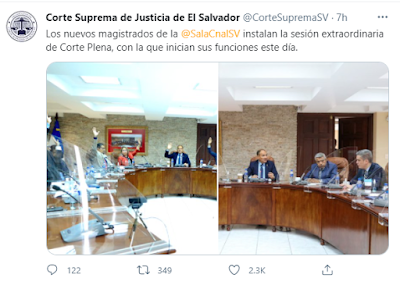 Two days after legislators in El Salvador abruptly removed from office all five magistrates of the Constitutional Chamber and the country’s attorney general and replaced them with others, a mountain of criticism has grown inside and outside of El Salvador.  Despite those criticisms, president Nayib Bukele has no plans to reverse course, and there appears to be little reason to believe that those removed from their posts could ever be returned.  As of today, three of the five magistrates and Attorney General Raul Melara had all tendered letters of resignation .    The letters are all eerily similar – they each proclaim that the author has always fulfilled the obligations of their office and declare that the actions to terminate them were unconstitutional and improper.    Then the letters go on to say, "but for personal and family reasons I am tendering my irrevocable resignation." A collection of lower court judges throughout El Salvador’s judiciary issued a statement r
2 comments
Keep reading

Checks and balances thrown out in El Salvador 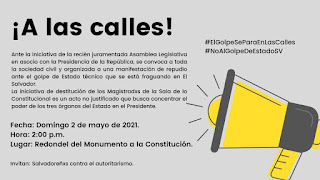 On their first day in the Legislative Assembly, the new majority in El Salvador's Legislative Assembly from the Nuevas Ideas party of president Nayib Bukele voted to fire all five magistrates of the Constitutional Chamber of the Supreme Judicial Court, to immediately elect new magistrates from a pre-determined list without debate or discussion, and to remove the country's Attorney General Raul Melara.  In taking these steps, Nayib Bukele's party has sought to remove all possible checks and balances on the powers of the president. Normally, the first day of a new Legislative Assembly is a day of pomp and circumstance and photo-taking as new members of the Legislative Assembly are sworn in.  Last night, however, the new Assembly took actions which many in El Salvador are describing as an " autogolpe " or "self-coup" and as an attack on the separation of powers and the independence of the judiciary. In the new Assembly which commenced on May 1, deputies fro
1 comment
Keep reading
More posts