Two days after legislators in El Salvador abruptly removed from office all five magistrates of the Constitutional Chamber and the country’s attorney general and replaced them with others, a mountain of criticism has grown inside and outside of El Salvador.  Despite those criticisms, president Nayib Bukele has no plans to reverse course, and there appears to be little reason to believe that those removed from their posts could ever be returned.

As of today, three of the five magistrates and Attorney General Raul Melara had all tendered letters of resignation.  The letters are all eerily similar – they each proclaim that the author has always fulfilled the obligations of their office and declare that the actions to terminate them were unconstitutional and improper.  Then the letters go on to say, "but for personal and family reasons I am tendering my irrevocable resignation."

A collection of lower court judges throughout El Salvador’s judiciary issued a statement rejecting the removal of the magistrates of the Chamber.  For them, it was clear that the resignation letters were coerced:

It is evident that the dismissed Magistrates resigned in the face of threats of capture and processing made known to them on social networks affiliated with the Executive Branch, as well as the presence of police patrols outside of their houses, which are nothing more than actions of other types of regimes of intimidation and coercion towards the integrity of the judges and their families.

Fired Attorney General Raul Melara has already changed his Twitter profile photo to an image of palm trees at the beach, and edited his profile to read simply  “Husband – Father of 3 – Lawyer.”

There was a hastily called demonstration on Sunday at the Monument to the Constitution in San Salvador.  Dozens of demonstrators calling Bukele a “golpista” and a dictator waved signs and shouted slogans at passing motorists.

Coalitions of dozens of Salvadoran civil society groups held press conferences to denounce the weekend’s sacking.  Various statements expressed the basic demands that principles of separation of powers, the rule of law, judicial independence and institutionality be followed.

Despite the voices of protest raised by civil society and the international community, the magistrates of the other three Chambers making up the complete Supreme Judicial Court convened today with the newly elected magistrates as part of the Court.  The lack of objection by the existing members of the Court to the incorporation of Bukele’s hand-picked magistrates would seem to put to rest any idea that resistance will come from within the judicial system.


Throughout Sunday and Monday, voices from governments throughout the world and international organizations expressed their concern over the developments in El Salvador.  Statements were issued by Canada, the European Union, Germany, among others.

US Vice President Kamala Harris, who has been given the task of addressing issues in Central America by Joe Biden, tweeted: 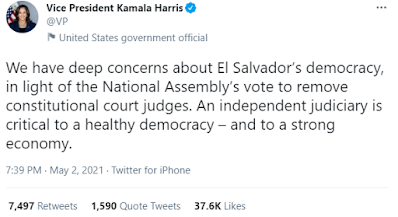 Sunday US Secretary of State Andrew Blinken called Bukele to express “grave concern” over the actions of the Legislative Assembly the night before.   On Monday, US Senators Menendez and Leahy on the Senate Foreign Affairs Committee called the removals  "A deeply concerning autocratic ambush in clear violation of the spirit of the Inter-American Democratic Charter and the fundamental principle of respect for the separation of powers."

China's embassy in El Salvador tweeted that "China always applies the principal of non-interference in the internal affairs of other countries and is convinced that the Salvadoran people have the ability and wisdom to manage their own internal affairs".   China has been active in supporting development projects in El Salvador and its own interests since El Salvador broke diplomatic relations with Taiwan in 2018.

According to El Faro, Bukele tweeted or retweeted 310 times in 24 hours as the process began Saturday evening. 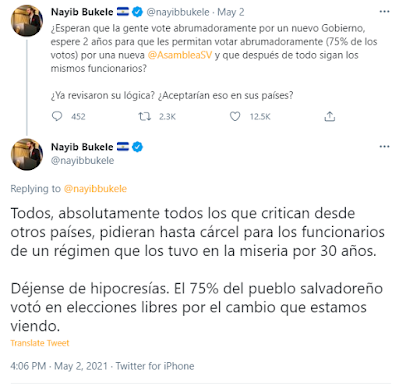 All, absolutely all those who criticize from other countries, asked even jail for the officials of a regime that kept them in misery for 30 years.  Stop being hypocrites. 75% of the Salvadoran people voted in free elections for the change we are seeing, 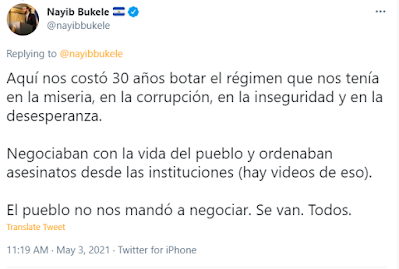 Here it took us 30 years to throw out the regime that had us in misery, in corruption, in insecurity and in hopelessness.   They negotiated with the lives of the people and ordered assassination from the institutions (there are videos of this).   The people did not direct us to negotiate with them.   They are leaving.   All of them.

The bottom line is that Bukele has successfully wiped away the elements of other branches of government which could check his exercise of power.   He expected the international reaction and calculated he could survive it, especially with ongoing support from China.  The great majority of Salvadorans support Bukele.  Hopefully that trust is not misplaced, because there are no checks to stop him if they are wrong.

Lawrence M. Ladutke said…
"Here it took us 30 years to throw out the regime that had us in misery, in corruption, in insecurity and in hopelessness. They negotiated with the life of the people and ordered assassination from the instiutions (there are videos of this). The people did not direct us to negotiate. They are leaving. All of them."

This sounds like a clear indication that he considers the Peace Accords null and void.
9:56 AM

Separation of powers isn't about balance between political parties. It's the balance between branches of government. What if one party controlled the Senate and the White House, then installed 234 judges, including 3 on the Supreme Court? Harris says El Salvador needs an independent judiciary. Maybe start here?

Flip side of magistrates being targeted with threats of prosecution on social media? Messages from politicians saying, "I am not a crook" or "it's a big witch hunt."

And though some big allies voice concern over Bukele's "power grab," many others see him as one of the great leaders of our time. So do Salvadoran voters, who elected him and the new assembly democratically to do exactly what they're now doing.
7:09 PM