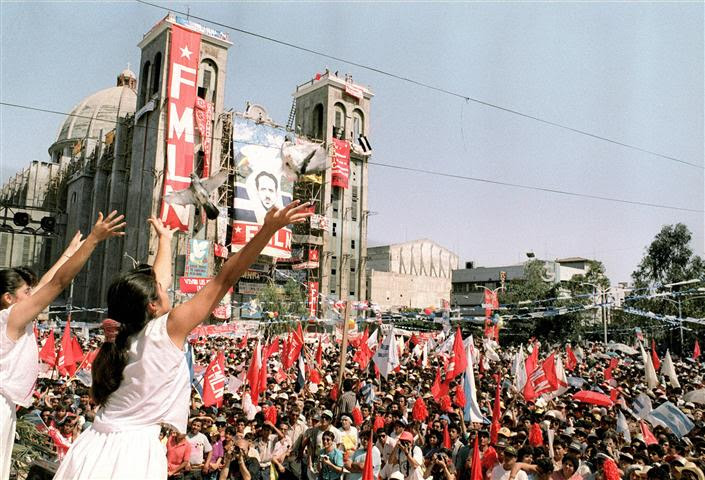 In a symbolic act, the official commemoration of the anniversary was held in El Mozote.   President Mauricio Funes apologized on behalf of the Salvadoran state for the massacres committed in December 2001 in El Mozote and surrounding communities.  He announced a series of community development initiatives in the El Mozote area.


Mr Funes made his emotional apology on the 20th anniversary of peace accords that ended the nation's civil war.  The president travelled to El Mozote, some 200km (120 miles) from the capital, San Salvador, near the border with Honduras.

"For this massacre, for the abhorrent violations of human rights and the abuses perpetrated in the name of the Salvadoran state, I ask forgiveness of the families of the victims," he said on Monday.

Breaking at times into tears, Mr Funes said: "In three days and three nights, the biggest massacre of civilians was committed in contemporary Latin American history"....

President Funes said the country's armed forces, 20 years on from the peace accords, were very different, "democratic and obedient to civilian power".

He called on the army to revise its history to avoid honouring those responsible for human rights abuses.

Excerpts from Funes' speech can be found here.

The United Nations oversaw the implementation of the Peace Accords and sees the need for more work to be done by the country to fully realize the benefits of the peace process:


16 January 2012 – UN Secretary-General Ban Ki-moon called today on El Salvador to address its socio-economic inequalities and advance rule of law reform to ensure its citizens can experience positive and tangible results from the peace process that was initiated 20 years ago at the end of its civil war.

“As we acknowledge the success of the peace process in El Salvador, we cannot forget that peace consolidation is a long process that requires addressing the root causes of the conflict,” Mr. Ban said in his message marking the twentieth anniversary of the historic Peace Agreements.

“Tangible peace dividends must materialize in citizens’ daily lives. Addressing socio-economic inequalities and advancing the reform of rule of law institutions in the face of citizen insecurity are among key challenges yet to be addressed at the national and regional level.”


Looking around at online comments, blogs and editorials, I found some common themes:

"If these have been 20 years of peace, why don't I feel better?"

"We no longer have war, but we don't have peace."

"There is no peace without justice."

"The conditions of poverty and inequality which prompted the civil war, still exist."

A fitting place to visit for the anniversary is this virtual Monument to Memory and Truth, which like the black stone wall in Cuscatlan Park in San Salvador, lists the civilian victims of the conflict.

Lawrence M. Ladutke said…
Nice words about impunity, President Funes, but why is there a member of the infamous Belloso Batallion--linked to massacres in the Truth Commission Report--in your cabinet? As Minister of Justice and Public Security no less?

(And, of course, why is one of Roque Dalton's killers also in your Administration?)
1:38 PM