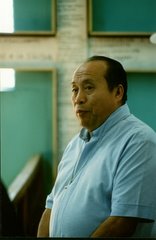 August 6 is celebrated in El Salvador as the feast day of the Divine Savior of the World, the patron saint of El Salvador. But for the Lutheran Church in El Salvador, it is also the anniversary of the date on which Medardo Gomez was installed as the only bishop this church has ever had. Today, August 6, 2011 marks the 25th anniversary of Bishop Gomez' installation, and the church will be celebrating with its own march through the streets of San Salvador.

I have had the privilege to know Bishop Gomez for almost 10 years.   He is a steadfast voice for social justice in El Salvador.   His church serves the poorest communities in the country, and his work is rooted in Latin American liberation theology which he has expanded and adapted as a "theology of life."   During the civil war, he was abducted and tortured by death squads, and on the same day the Jesuits were massacred in 1989, Bishop Gomez narrowly escaped when troops arrived at his church with orders to capture him.  For his work during this time, he was nominated for the Nobel Peace Prize.

The following quotes give a small taste of Bishop Gomez ministry:

Jesus is found wherever there is a believer: in the street, in the home, the factory, workshops, schools, offices, refugee camps, hospitals, jails, garrisons, battle zones, in the mountains, and in the city. God is present with the true disciple, struggling against oppression, misery, captivity and death.


Our Salvadoran people are in mourning. The tragedy we are experiencing is of immense pain, which only a people accustomed to so much suffering is capable of bearing. In my soul of a pastor, even I ask myself, saying to God, "Why us, Lord?"


We are already tattooed by so much suffering: social, economic, political, cultural problems; epidemics like dengue fever, diarrhea, viruses, etc.; the scourges of poverty, delinquency, violence, and now we are surprised by the natural phenomenon of an earthquake, yesterday, Saturday, January 13, a phenomenon which repeats itself in a cycle of 10 to 15 years.

Excerpts from a January 14, 2001 letter from Bishop Medardo Gomez to sister churches in the United States following the first of two earthquakes to hit El Salvador in early 2001.


Stewardship should be oriented toward the spirit of solidarity, and climatic justice must respond in this way. In the responsibility of each nation for the protection of the climate system that future generations will inherit, there must be terms of security with a basis in fairness, in accordance with the abilities of each region or country. The rich possess the means and the conditions to protect, adapt, and mitigate the harmful effects of climate change.


The poor confront the damages done by a problem they have not created. This is the ecological injustice.

Climatic Justice ~ an article, including photos, written by Bishop Medardo Gómez for the 2010 Summary Book for the Salvadoran Lutheran Church. Translation by Rip McManus

By the end of our visit, I had learned why a Lutheran bishop is a threat to the government of El Salvador. The "sins" of Bishop [Medardo] Gomez are the sins of a host of others as well: he believes that the church's mission includes political involvement; that the gospel has a special concern for the poor that must be translated into the actions and policies of a nation; that a negotiated peace is preferable to an ongoing war; and that bishops often have to speak out and act in ways that are critical of the government. Such actions, whether by bishops or not, are actions punishable by death, and there are seventy-five thousand dead Salvadorans to attest to the accuracy of that proposition.


Second, I had learned why Bishop Gomez is so loved. Once he was back with his people, he realized that he could not truly be their bishop from the safety of another country, but must be in their midst, working, suffering, threatened, just like everybody else...


At an ecumenical service on Epiphany, a Baptist pastor said to Bishop Gomez, "We Baptists don't have bishops. But you, Medardo, are our bishop."


Ditto for this Presbyterian...


You can read a short biography of Bishop Gomez at this link, and learn more about him and the Salvadoran Lutheran Church here. 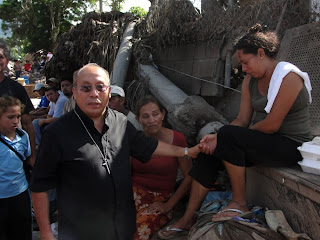 Bishop Gomez consoling one of the victims of the
November 2009 landslides in Verapaz, El Salvador.