Should Bukele's government, which flouts the constitution, be allowed to overhaul it? 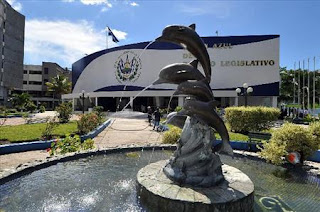 My most recent post described the newly-released draft of a proposed overhaul to the constitution of El Salvador prepared by the so-called Ad Hoc Group led by Vice President Felix Ulloa.   In that post I highlighted a variety of proposals in the area of individual human rights which made progressive changes in the list of protected interests, from LGBTQ rights to the human right to water, which are absent in the current 1983 constitution.

But this list of rights can only be meaningful and enforceable if there is a true separation of powers with independent institutions and, especially, a strong and independent judiciary.  Since Nayib Bukele’s ascension into the presidency, however, there has been a continual assault on the judicial system and the independence of those other branches of the government which could act as a check on a president’s powers.

So when a commission backed by Nayib Bukele proposes an extensive revision of El Salvador's constitution, serious doubts must exist.  Despite the fact that some of the changes might be ones which could be individually supported, civil society groups are condemning the Ad Hoc Group and the process surrounding this draft of the Constitution.

The opponents of the proposed revisions start their criticism pointing to a perceived lack of transparency surrounding the process in developing this draft document.  In response, the Ad Hoc Group asserts that the process was open and public because the Group solicited suggestions and purportedly received more than 4000 inputs from Salvadorans at home and worldwide.  Critics point out, however, that the debate, the discussion, and the arguments about how to develop the proposal were not conducted in public.

More fundamentally, opponents reject the idea that this group led by the executive branch should be in charge of overhauling the country’s foundational document. Their argument is reinforced by the fact that the reforms will be voted on by a Legislative Assembly dominated by Nuevas Ideas and which has shown itself to be entirely subservient to Bukele. The new Legislative Assembly has not exercised its constitutional role as co-equal branch of government and simply rubberstamps the proposals submitted to it by the executive branch.  A perfect examples of this was the surprise adoption of Bukele’s Bitcoin Law, making the crypto-currency legal tender only a few hours after the law was proposed and without study or analysis by legislators.

Those civil society groups with a focus on human rights and the rule of law declined to attend the presentation to avoid giving the process a stamp of legitimacy.  In an open letter to Vice President Ulloa, human rights organization Cristosal stated that recent history in the country “provokes doubts about the intentions and motives of substituting the Magna Carta” at this moment.

In a document titled “Asi No!” (Not that way!) a coalition of groups rejected the proposal process and declined to attend the presentation writing that “it’s impossible to trust in those who want to amend the Constitution.”  The coalition rejects the proposition that the existing Constitution needs significant reform and protests the idea that the President should be the arbiter of what could be in this constitutional overhaul.  Following the blow against the independent branches of government on May 1, they state, the democratic conditions do not exist for the amendment of the country’s basic governing document.

One of the groups, Citizen Action explained that they are not opposed to the concept of reforming the Constitution, but they oppose the format in which this process of reform is being carried out.

In an editorial the Jesuit-run University of Central America stated:

It is imperative to expose the political contradictions between what is said and what is done when they occur in the field of legality or democratic ethics. Doing so helps to expose the fallacy of the discourse on realities or problems that deserve a serious, responsible approach. And this task takes on more urgency today when many government officials have more interest in reforming the Constitution of the Republic than in complying with it. [For example,] for 38 years, every Salvadoran has had the right to compensation for judicial delay. But since there is no secondary law that stipulates the amounts, the constitutional right is negated. In other words, although this right exists on paper, neither the Executive, nor the Legislative Assembly, nor the judges have sought to make it a reality.

Vice-president Ulloa has stated that it will be up to Nayib Bukele to decide how and when to submit the proposed constitutional overhaul to the Legislative Assembly.

The history of Nayib Bukele’s first two years in office explain why there are such deep doubts about his seriousness for adhering to constitutional norms and separation of powers.   First, there was his incursion into the Legislative Assembly on February 9, 2020 with armed troops to demand that the Assembly approve a loan package.  Then there were the multiple violations of protected constitutional rights during the country’s pandemic lockdown including arbitrary detentions and closing the borders to Salvadoran citizens, followed by Bukele’s willingness to flout orders of the Supreme Judicial Court when it found him to be acting unconstitutionally.

There is also reason to be skeptical of provisions in this proposed draft which purport to acknowledge a broad right of access to public information, when this government has acted repeatedly to restrict access to public information for everything from how it is spending hundreds of millions in pandemic response funds to the number of people who have died at Hospital El Salvador, to the government's analysis of its own record on public transparency.

Finally, Bukele’s contempt for the separation of powers, aided by his party’s complete control of the Legislative Assembly, was made clear in the May 1 “auto-golpe” in which the five magistrates of the Constitutional Chamber and the Attorney General were summarily deposed and replaced by Bukele allies. It was this action which prompted constitutional lawyer Fabio Castillo to resign from the Ad Hoc Group.

Some of the changes proposed in the Ad Hoc Group draft respond to recent events in ways that expand the powers of a populist president with autocratic tendencies.  For example, the draft states that the president’s Council of Ministers can suspend certain constitutional guarantees not only when the Legislative Assembly is unavailable, for example in the moments after a major earthquake or during a hurricane, but also if the Assembly refuses to meet:

Suspend and reestablish the constitutional guarantees referred to in Art. 29 of this Constitution, and declare a state of emergency, if the Legislative Assembly is unable to meet in any way or refuses to do so. (New Art. 167, sub 6)

There is an expansion of the internal role of the Armed Forces from assisting in times of “national disaster” to times of, the more ambiguous and subjective, “cases of national emergency”:

The Armed Forces will collaborate in public benefit works entrusted to it by the Executive Branch and will assist the population in cases of national emergency in accordance with this Constitution and the laws. (New Art. 212)

After the February 28 national elections this year, Bukele was cited by the Supreme Electoral Tribunal (TSE) for engaging in election propaganda outside of the time limits established in the current constitution.   So this new draft just eliminates those time limits:

The right to electoral propaganda is recognized. A law will regulate everything related to its exercise. (New Art. 81).

Bukele had a series of disputes with the TSE leading up to his candidacy for president in 2019, and perhaps it is no coincidence that the proposed constitutional reforms abolish the TSE.

If the Legislative Assembly were to become controlled by political opponents to the President, he can go around the Assembly under the Ad Hoc Group draft, and propose laws through plebiscites and popular referendums.  In short, this new draft offers tools for a populist dictator who can command majorities in national elections.

The Ad Hoc Group argues that this is the modern constitution that El Salvador deserves as it nears the 200th anniversary of Central American independence from Spain on September 15.  We don't know if the current constitution could function as a strong foundation for individual and collective rights in the country because the present government, even more than its post-war predecessors, keeps flouting the constitution, and then deposing the magistrates of the Constitutional Chamber who are tasked with the enforcing the magna carta of the country.  A government which fails to honor the current constitution, has lost the moral authority to propose amendments to that document, no matter how modern and progressive those amendments might be.

(For those wishing to study the proposed reforms in detail, you can review the full proposal in its original Spanish here. You can see the existing 1983 Constitution as amended here in Spanish. For ease of reviewing the changes, I have put the existing Constitution and the proposed reforms side-by-side in this document. Finally, I ran the side-by-side comparison through Google Translate for a pretty good, but imperfect, translation for English speakers.)
Bukele Constitution Human Rights Justice system

Silvia's blog said…
Being brutally honest I cannot understand how it is that you have to interfere, to give opinions of El Salvador when in your writings you describe reality from a perspective of white privilege.
Whenever I read you, I think that you lack a bit of humility to really learn what the reality of poor and marginalized people is in El Salvador. You can't even see all those peasants who live in shacks and who have been there for more than 20, 30, 40 years while governments have been robbing them of the opportunity to be able to insert themselves into society ... Unfortunately from your perspective of privilege you cannot place yourself and understand the true reality of the majority of Salvadorans who experience poverty. your white privilege is what speak in every sentence that you write and I don't know how I can bear so much arrogance and I don't even know why you have taken to the task???