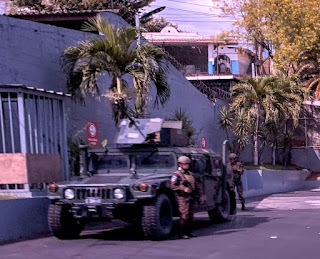 The streets of San Salvador, especially around the government center, were filled with soldiers and security forces on Sunday.   The reason?   It was not relief efforts for some natural disaster (although a 5.3 earthquake off the Pacific coast of El Salvador woke many residents at 2:30 in the morning).   It was not to fight a crime wave (president Nayib Bukele has celebrated that monthly homicide rates have hit post war lows).   It was not to combat an insurrection.   (The only insurrection was the one which the commander and chief of the armed forces, Bukele, had called on his followers to prepare for). 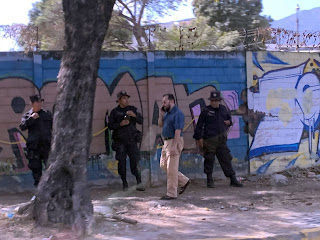 Instead, the reason was high stakes political theater.   The purpose of the show was to demonstrate who was in charge in El Salvador, and that person is president Nayib Bukele.   The deployment of troops and police had no other purpose.  Bukele was using the country's armed forces and the country's police force to establish himself as the country's strong man who would be in charge of interpreting what its constitution means.

This video in a tweet from Radio YSUCA shows some of the security forces deploying today near the University of El Salvador.

As I wrote in this morning's post, Bukele's Council of Ministers had issued a directive to convene an extraordinary session of the Legislative Assembly at three in the afternoon on Sunday.   The purpose of the session was to approve a $109 million international loan for the modernization of the military and police forces.  The Legislative Assembly declined to be told when it should and should not meet, and last night, scheduled a time to take up the loan package at noon on Monday.

Bukele refused to relent on the 3:00 time Sunday afternoon to commence an extraordinary session and called his followers to join him outside of the Legislative Assembly.   Throughout the day, police and soldiers deployed throughout the city.  The reason for posting those forces in public spaces in San Salvador was never explained by Bukele or his security ministers.

In calling the people to gather in front of the Legislative Assembly, Bukele referred to Article 87 in the Constitution of El Salvador which contains the right of the people to "insurrection:"

Bukele referred often to the deputies of the Legislative Assembly violating the "consitutional order,"   another phrase found in Article 87.   Was he considering the remedy under that article  part of Art 87 for "the removal insofar as necessary of transgressing officials, replacing them in a transitory manner until they are substituted in the form established by this Constitution"?
As 3:00 approached, security forces under control of the executive branch took over guarding access to the Legislative Assembly.   When the dozen or so deputies who had decided to show up entered the Legislative Assembly, they did so in the presence of armed troops who ringed the chamber.

The video in this tweet shows the stationing of armed soldiers in the Assembly.

Around 4:00, Bukele arrived at the outskirts of the Legislative Assembly where his supporters were gathered.   He took to the podium and began a diatribe against the the deputies in the Legislative Assembly who had thus far failed to approve his requested loan package and were not showing up for this special session.   His most pointed attacks relied on the recent indictments of political leaders for negotiating with gangs for votes in the 2014 presidential election, saying that the major parties had paid money with the gangs which the gangs used to buy arms and munitions to take Salvadoran lives.  Now, said Bukele, they refuse to give votes for a plan to provide for security for Salvadorans.

Video of Bukele address to supporters outside Legislative Assembly.

After speaking to the crowd, Bukele entered the Legislative Assembly.   He spoke a few words to indicate he was there to convene the special session called by the Council of Ministers. Bukele, with deputy Guillermo Gallegos of GANA seated next to him, then began to pray silently for several minutes.  Finished with his prayer, Bukele rose and walked out of the Assembly chambers.

Bukele returned to the speaker's platform in front of his followers outside.   He told them in prayer he had decided patience was needed.   He would give the deputies one more week to approve the loan package.   If they failed to do so, he promised to rally his supporters again next weekend.

The ball is now in the Legislative Assembly's court.   Failure to act on the loan package will trigger another weekend like this one.   Yet the deputies in the Assembly don't like Bukele and they don't like to be ordered around.  In an election year like this one, their political calculus is difficult.

One could not help but feel today that El Salvador has taken a significant step backwards in the process of consolidating its democracy after the civil war.  The images of troops inside the Legislative Assembly led many to recall the conflict years of El Salvador.  The provisions of the Peace Accords which returned the armed forces to their barracks and out of domestic matters seem to be long forgotten.  Now troops with automatic weapons and police in flak jackets are being deployed solely for a political purpose of a president who rejected all calls for dialogue.

Greg said…
It is a significant step forward.

The military has aligned itself with the most popular elected president of El Salvador in modern times. It has demonstrated this now.

Both ARENA and the FMLN are on notice.

In addition, you cannot possibly know what behind the scenes concerns the president had or was made aware of regarding his safety, or the safety of those deputies who appeared as convened by the president. Certainly elements of both ARENA and the FMLN continue to possess the means and desire to return to the old days of sudden death in order to preserve their status.

The deputies have a week - patience, indeed - Bukele is proving himself to be a rough and tumble political player determined to see El Salvador emerge from years of corruption and moral failure.
7:16 AM

Don said…
I don't see how rallying the population to force the LA to act on important and life saving policies is a step back for "consolidating democracy" (whatever that means).

Journalists have complained about the violence and corruption for decades. Now, all of a sudden a president is about to put an end to it, and all they want to do is freak out about democracy. Sounds to me like they want El Salvador to be hell on earth. It's a lot harder for hipster free lance journalists to sell articles about a safe and prosperous El Salvador. It's a lot easier for them to sell stories about their journey deep inside gang territory.