July 26, 2018
The 2019 presidential election outlook changed again today as El Salvador's Supreme Electoral Tribunal (TSE) announced that it would de-register the party Cambio Democratico (CD) so that CD cannot place a candidate on the presidential ballot for 2019.   The decision relies on a provision in Salvadoran law which requires parties to be decertified if they did not earn 50,000 votes in national legislative elections.  Nayib Bukele, the former mayor of San Salvador and the country's most popular politician, had made an alliance with CD to be its candidate, since his own party, Nuevas Ideas, has not been registered by the TSE in time to participate.

Moments after the TSE's decision was announced, there was another major development.  Stories began appearing that  Bukele has been allowed to enroll as a candidate in the internal primary elections of the GANA party which will take place on Sunday.   Yet leading figures in the party, Guillermo Gallegos and Will Salgado, denied on Twitter that Bukele had properly enrolled as a candidate.

In the GANA primary election, Bukele would face Salgado, the former mayor of San Miguel.  Salgado is already claiming that he is the only legitimate candidate within GANA.   While Bukele may be the most popular politician across the Salvadoran public as a whole, that does not mean he is the most popular politician within the party membership of GANA.    The question will be whether the party faithful want a candidate who can win the presidency but is not a a GANA partisan, or whether they want a GANA partisan who is a little bit crazy (and probably can't win).

Earlier in the day, the right wing parties of El Salvador, came together in a public ceremony to announce their alliance behind presidential candidate Carlos Calleja of ARENA.   PCN and PDC have thrown their support behind Calleja to create a unified right wing block which already has a majority in the legislature.   They could scarcely keep the grins off their faces, knowing that Bukele is really the only threat that Calleja has at the polls in February.

Bukele plans an announcement on Facebook Live tonight at 8pm El Salvador time, and I will update this blog post after his speech. 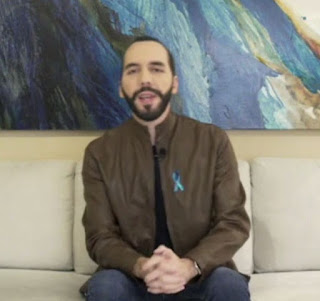 Nayib Bukele went on Facebook live tonight to explain to his hundreds of thousands of followers where he plans to go next.  Like his other Facebook broadcasts, Bukele, dressed casually, addressed his audience seated on a sofa in a living room.

As he has done recently, Bukele's theme was to position himself as the champion of the will of the people against all the forces in power who want to thwart that will.  Most of his video was his argument against the process which led up to the cancellation of CD with the goal of denying his path to the presidency.

Finally, Bukele announced that at 11:25 in the evening on Wednesday night, with the prospect of today's decision, he had signed his papers to be enrolled as a candidate in the internal elections of GANA.   Bukele described numerous measures he had taken to document and time-stamp the event of his enrollment which needed to be done before midnight.     He had clearly heard the protests of Will Salgado and Guillermo Gallegos that they had not seen anyone show up at GANA party headquarters last night.

Bukele acknowledged that his biggest battle could be the GANA internal elections on Sunday.   Remember that GANA is the party formed by former president Tony Saca as a split-off from the ARENA party.   (Saca is currently on trial for allegedly stealing more than $200 million while he was president).   GANA has opportunistically aligned itself with the FMLN in recent years, but not out of any real ideological affinity.

It also seems clear that GANA has waited until the very last moment to choose a presidential candidate or make a coalition in order to see who would offer the party the best deal.    Bukele has three days to prove to the GANA voters what he can deliver for their party and not just for his own presidential ambitions.

So we wait for the next chapter in this story on Sunday.

Brian said…
Thank you for such a prompt update. Watching this closely.