Today is the anniversary of what has come to be known in El Salvador as simply "9F."    On this day one year ago, Salvadoran president Nayib Bukele, summoned his supporters to the outside of the Legislative Assembly building in a dispute with his opponents in the congress over a loan approval. Police and military were deployed throughout the capital city.  Then Bukele marched into the chambers of the legislature accompanied by heavily armed soldiers and took the seat belonging to the president of the Legislative Assembly.

Critics of Bukele see this event as a prime indicator of authoritarian tendencies in the popular president.  On display was his willingness to disregard constitutional norms and the separation of powers.   Also evident were armed forces and national police who understood their loyalties as running directly to the president.

As the events of that day unfolded, I wrote these two posts:
Nayib Bukele's power play

Bukele sat at the front of the Legislative Assembly, next to his ally Guillermo Gallegos of GANA, and began to pray silently.  Then Bukele got up and left, telling his followers gathered outside that God had given him a message to have patience and let the Assembly have another week to approve the loan package sought by Bukele.
In the days that followed, Bukele backed down slightly, facing an order of the Constitutional Chamber rejecting his actions and under significant international pressure.   I covered these reactions in two additional posts:
Court blocks Bukele actions as criticism of his use of military pours in
Bukele justifies his actions
On today's anniversary, a coalition of news media has put together a four part documentary mini-series about the events of 9F called El Retorno de los Fusiles  (The Return of the Rifles).   You can watch the first part here.   The second part will air tonight.     It is a cautionary tale leading into national elections at the end of this month.   (Sorry, it is only in Spanish). 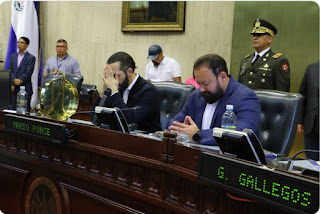 Don said…
If you think this is crazy, then you should hear about the president that didn't do anything at all when they burned a bus full of people in 2010.
10:14 AM

I guess they should have had a memoria guy or a documentary.
3:37 PM

Don said…
Ask the Guatemalans and Hondurans what they think of Bukele, golpista.
7:27 PM

Don said…
Tim loves El Salvador so much that when he heard that his government was funding the civil war to the tune of $1 Million per day in 1986...he decided to wait 30 years and then start a blog.
8:51 PM

Don said…
You're gonna have to either show some 1980 street cred or wait until after elections to post.
10:01 PM

Don said…
Pretty hilarious that right after your interview on 106.9 fm velasquez parker (arena) and shadik handal jr. (Fmln) announced their intent to do a golpe on air.

This happened on the same radio station that Tim also appeared on minutes earlier.

Take a look. 106.9's twitter has been deleted and Tim deleted his tweet that promoted his appearance on that radio station.

Don said…
It is very crazy. Even Ernesto Muyshondt (arena mayor of san salvador) is calling it an attempted coup.

And you were on the air talking about Bukele being a a dictator a few minutes prior to the two main guys who started the destitution of the president attempt went on to announce their plan.

And you are still on Twitter calling the president of El Salvador a demagogue with authoritarian tendenciez. That is insane for a foreigner to be doing.

You must have missed "dont do a coup" day at harvard.

Don said…
It looks like they used you to lend some legitimacy to their poorly thought out coup.

That is what it looks like. They saw these American politicians and people with a good resume that believe all their bs about bukele or that could be convincrd and they used them to support their crazy coup.

Who is violating the rule of law now? Don't be their patsy.
2:56 PM

Tim said…
If anyone wants to listen to the radio interviews from the morning of Feb. 9 that Don is mentioning, they are still available for anyone on the 106.9 Facebook page. https://www.facebook.com/1069FMRadio

Don said…
It disappeared because they deleted it.
3:47 PM