February 11, 2020
One day after president Nayib Bukele marched into the chambers of El Salvador's Legislative Assembly accompanied by heavily armed soldiers and police in flak jackets, his attempt to force the congress to do his bidding was dealt some major setbacks.

On Monday, the Constitutional Chamber of El Salvador's Supreme Judicial Court agreed to take petitions from citizens protesting Bukele's actions this past weekend.  The Chamber found constitutional flaws in Bukele's use of his Council of Ministers to demand a special session of the Legislative Assembly to vote on an international loan package for security funding and then to deploy the police and armed forces inside and outside of the chambers of the legislature (Salon Azul) to make his point.   In accepting the petitions, the Chamber ordered Bukele to cease using the Council of Ministers to convene the assembly in extraordinary session and to cease using the police and military for purposes not authorized by the Constitution.   The preliminary orders also instructed the heads of the police and armed forces to refrain from using units under their command for those purposes.

On hearing the news, a large group of the deputies in the Legislative Assembly cheered in a standing ovation.

Bukele issued a statement that his administration would abide by the court's ruling although the executive branch does not agree with the decisions and it will make governing more difficult.

The presence of heavily armed troops in the Legislative Assembly on Sunday drew widespread condemnation from the international community.  Criticism even came from the US, whom Bukele calls the country's most important partner.  Perhaps most striking was the tweet of US Ambassador to El Salvador Ron Johnson who stated: 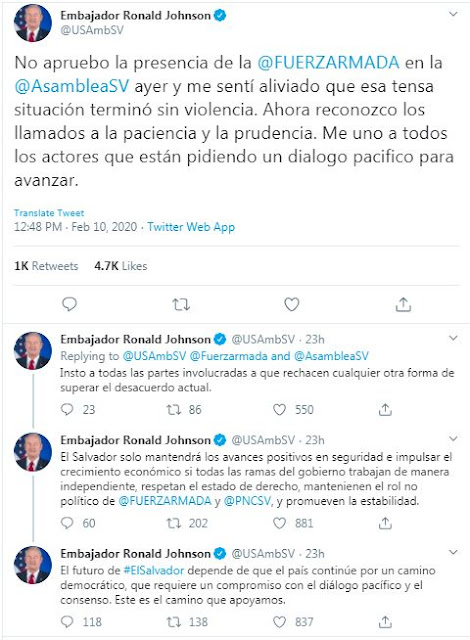 I do not approve of the presence of the @FUERZARMADA in the @AsambleaSV yesterday and I was relieved that this tense situation ended without violence. Now I recognize the calls to patience and prudence. I join all the actors who are asking for a peaceful dialogue to move forward.

I urge all parties involved to reject any other way to overcome the current disagreement.

El Salvador will only maintain positive advances in security and boost economic growth if all branches of government work independently, respect the rule of law, maintain the non-political role of @FUERZARMADA and @PNCSV, and promote stability.

The future of #ElSalvador depends on the country continuing on a democratic path, which requires a commitment to peaceful dialogue and consensus. This is the path we support.

Johnson has been one of Bukele's biggest supporters, even to the point of sharing photos on Twitter of their two families enjoying time together at the ocean two weeks ago.   But Bukele's recent actions had been a step too far.  Leading up to Sunday, Johnson had publicly urged dialogue, and Bukele had clearly ignored him.

Members of the US Congress also voiced their concerns.  Chairman Eliot Engel of the House Foreign Affairs Committee wrote:


The Salvadoran military should not be used to resolve disputes between the president and congress. Civilian differences should be resolved by civilian institutions. The eyes of the world are on El Salvador and Nayib Bukele at this critical moment.


The military and police should return to barracks and not engage in political matters. Such a show of force echoes the darkest days of El Salvador’s history. Salvadorans have sacrificed so much for democratic institutions — any action to undermine them is simply unacceptable


The political crisis in El Salvador, in which the security forces have been deployed to intimidate the National Assembly, is reminiscent of the days when political disputes were settled with threats and violence.  That cannot be condoned today, especially by a government that wants to be a partner of the United States.

However this morning, Ken Cuccinelli, acting deputy secretary of the US Department of Homeland Security tweeted: 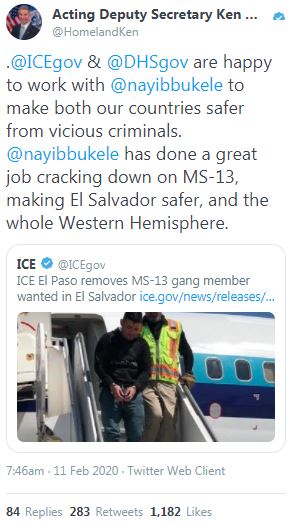 International human rights groups expressed their concerns.  Human Rights Watch labelled the entry of security forces "an exhibition of brute force" and urged the Organization of American States to take up the matter.

The Washington Office on Latin America issued a statement including:


The international community, including the United States, must strongly condemn the involvement of the military in a political dispute. They must also urge President Bukele to recognize the independence of the National Assembly, and emphasize the need to use dialogue rather than coercion or threats to address political disagreements.


We are very concerned by developing situation in #ElSalvador. @NayibBukele ordered military/police to enter Congress to demand the approval of a security budget. This is an authoritarian way of operating. Separation of powers is CRUCIAL to the rule of law.

Twenty-seven national and international civil society and human rights groups signed onto a statement which included:


Taking into account the Presidency of the Republic´s discretionary use of insurrection, the endangered independence of the organs of the State, and the various attacks on the right to information and press, which are the very backbone of the constitutional order of a democratic state, we consider that this day has led to a dangerous degree of political and social tension in the country. Throughout its history, El Salvador has experienced various episodes of such tensions which have left immeasurable tolls on the country, the last of which are still being debated, without any true national reconciliation.


Celia Medrano, chief programme officer of San Salvador-based human rights organisation Cristosal, said that it is a fallacy that the president's actions were to "protect the security of Salvadorans". Instead, the actions damaged the country's institutions and she called for a return to the balance of powers in the country.

The criticism clearly stung Bukele.   He lashed out in an ugly tweet:


To the international community, to the press, NGOs, multilateral organizations, political actors, This is what the deputies and the two parties that control the Assembly finance. This is what they don't allow us to prevent. This is the important thing. Let's cut the hypocrisy. [with a video captioned "The deputies want to return to this"]


In an interview in El Pais, Bukele was quoted saying:


Someone who does not know El Salvador sees the photo of the military in Congress and says: "What barbarity!" But, what is more serious, a photo of some soldiers where no one was attacked, there were no injuries, no gunshots ... or to know that there were deputies (from previous governments) who negotiated with gang members. The military was only an act of presence. To look at that [photo] is to be focusing on the superficial....


But it is not yet clear if Bukele has lost any significant political support.   In an article in AlJazeera, Anna-Cat Brigida has quotes from several Bukele supporters who were gathered outside of the Legislative Assembly on Sunday.  She writes:


Supporters of the president say that critics have misrepresented the situation.

"For them, it's an attack against democracy, but it's not like that", said 50-year-old industrial engineer Jose Manuel Munguia. "It's totally the opposite. This is not a coup."

At the moment, it appears that Bukele badly overplayed his hand.   The young businessman with a background in advertising completely failed to recognize how the images of the Salon Azul ringed with heavily armed troops would prompt a major backlash internationally.   The millennial president, who recently completed a global tour and who took a selfie at the dais of the United Nations General Assembly, now had linked himself to images of Latin American dictators.   Even if his popular support is still strong, Bukele and El Salvador's international standing has been harmed.

With the ruling of the Constitutional Chamber, the prospects for approval of the $109 million security modernization loan are uncertain.   The pressure is off for the Legislative Assembly to quickly act on the proposal.  The Treasury Committee of the Legislative Assembly was proceeding to discuss the bill today.  Legislators say they still have questions about the spending by the Bukele government on security and policing.

Bukele will certainly turn his attention to replacing the deputies in the Assembly in next year's election.   The "#28F" election (anything Bukele touches must have a hashtag) takes place on February 28, 2021 and elects all the members of the Legislative Assembly and all the municipal governments.   It will be the first legislative election in which Bukele's party, Nuevas Ideas, has competed.

As he campaigns against and demonizes the deputies in the Legislative Assembly, Bukele will be aided by the current judicial proceeding against leaders of both ARENA and the FMLN for paying the gangs for votes in the 2014 presidential election.   And Bukele is right -- those payments were reprehensible, criminal and violate democratic norms.   What Bukele failed to see, is that the misdeeds of his enemies do not give him license to undercut the institutions of Salvadoran democracy, including the independence and separation of the branches of government.
Constitutional crisis Nayib Bukele US relations

David said…
Don't forget to note the the Fiscal is also investigating two members of Bukele's administration for the same kind of negotiation with gangs! Bukele is trying to bury that story.
4:12 PM

Regarding the diputados that are being investigated.
There is video evidence and sworn testimony from the president of COENA saying he gave Muyshondt $30,000 to pay the gangs FOR VOTES. They discovered that FMLN and ARENA paid gangs at least $600,000 in 2015 and 2016 FOR VOTES. THAT IS NOT NEGOTIATION. THAT IS "AGRUPACION ILICITA and FRAUDE ELECTORAL."

Regarding the ministro that is in Bukele's cabinet.
When Bukele was mayor and about to open a big market to restructure the downtown area of San Salvador, a member of Bukele's staff was seen in a restaurant with two gangsters.

That is all of the proof that they have that Bukele even tried to work out any kind of deal. The deal was probably to keep anything from happening after opening the market. BECAUSE THE MARKETS AND REVITALIZATION OF THE DOWNTOWN AREA MOVED THE GANGS OUT OF THAT TERRITORY AND MADE IT MORE DIFFICULT TO EXTORT FROM INFORMAL VENDORS THAT DIDN'T HAVE A PROTECTED SPACE TO SELL THEIR GOODS.

Downtown San Salvador was the most hotly contested gang territory in the country (in the history of the country too at that time).

Bukele's guy may have tried to work out some kind of deal to prevent problems, maybe not. BUT THERE IS NO PROOF THAT ANYBODY GOT PAID ANY MONEY FOR ANYTHING. The only proof that has been offered is that there weren't any retaliatory attacks by gangs and the markets and revitalization of the downtown was carried out with extraordinary success.

So, no, Bukele is not being investigated for the same kind of anything, especially not negotiating.

Also, the armed forces an president are the most trusted institutions in El Salvador by the Salvadoran people.