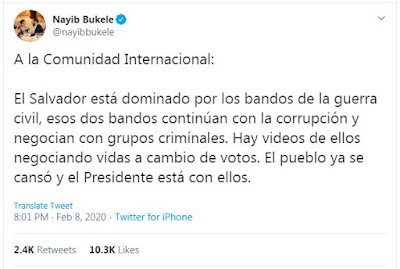 Don said…
The constitution of El Salvador guarantees that the president and his cabinet of minsters have the right to convene the Legislative Assembly whenever there is a valid public interest (and yes, a loan for a security plan for the nation is in their interest and so yes the article definitely applies). I don't see how exercising that right constitutes a constitutional crisis.

Don said…
Bukele calls an extraordinary session of the legislative assembly for a Sunday afternoon in order to overcome an impasse in negotiations between deputies and acquire funding for the third phase of a security plan that has reduced gang violence. We are talking about gang violence that was at historically unprecedented levels world wide. The population was invited to show their support (or disapproval) of the loan.