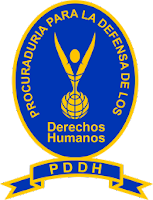 One high profile governmental office in El Salvador has no power and no ability to make or enforce laws.  The Procurador Para La Defensa de Los Derechos Humanos ("Human Rights Advocate" or "PDDH" for its initials in Spanish) is the country's leading human rights monitor, placed as an official position within the government. The post of PDDH was created in the constitution following the 1992 peace accords. The PDDH is to monitor and report on human rights issues in the country, but their power is limited to the power of persuasion and publicity. The PDDH can neither prosecute violators nor pass laws. They can only denounce the human rights violations which they observe.  The person holding the office of Procurador in El Salvador today is Apolonio Tobar.

Initially, the PDDH opened an online form and a mobile app for persons to file reports of human rights violations, and through that site has received hundreds of denunciations. The PDDH has insisted that the office is taking steps throughout the country to verify compliance with human rights norms.

But a report report by human rights NGO Cristosal, evaluating the first two months of the State of Exception, criticizes the PDDH for giving the appearance of action without actually accomplishing much to protect human rights in the country. Although the PDDH acknowledges receiving hundreds of complaints from citizens regarding human rights abuses, there was little indication that the PDDH is doing any serious follow up on the complaints. Cristosal critcized the PDDH for not having visited any of the prisons in the first months of the State of Exception, and limiting itself to visiting local jails where prisoners were held for short periods before being transferred to prisons.

Apolonio Tobar and a team from his office finally made a visit to the large Mariona prison on June 29, more than three months after the start of the State of Exception on March 27 and months after reports of abuse within the prisons had already started to circulate. His visit was accompanied by Bukele's Minister of Public Security and the head of the prison system, Osiris Luna Meza. To date, the PDDH has not visited any other prisons, including Izalco prison where dozens of detainees have died during the State of Exception.

Tobar issued a statement after his visit to Mariona. The statement starts with a defensive tone proclaiming that the work of the PDDH is not done to advance the agenda of anyone and is not aligned with any partisan political interest. Tobar indicates that he was told prisoners receive meals three times a day, have available recreation and access to light, have access to medical and psychological services and are receiving kits delivered by their families. His statement concludes with some general counsel to the ministry of public security and the prison system that they should respect human rights and the physical integrity of incarcerated persons and have a system for communication between prisoners and their families and lawyers.

The office of the PDDH then released a video featuring Tobar which appears more like a public relations presentation for the prison system than the report of a human rights advocate verifying serious charges of human rights violations:

Tobar only needed to look at the tweets of head of the prison system, Osiris Luna Meza, who accompanied him every step of the way, to have serious doubts about what Tobar was seeing on this guided tour. Luna Meza has tweeted multiple videos like the following with the message to president Bukele that the prisons will make the "homeboys" suffer:

In security and maximum security prisons, gang members
no longer have personal cleaning supplies or mattresses
to sleep on.The most severe regime awaits
the terrorists who threaten the peace of Salvadorans.

(And these videos were published before another 30,000 inmates were added to the prison system in following weeks).

For David Morales, a former PDDH himself, the prison visit by Tobar and the video he released were a travesty:

This is not a real verification of the @PDDHElSalvador, but a shameful montage that tries to cover up the human rights violations that are being committed.... The "verification" of the Procurador, in the published video, seems more like a "guided visit" by the officials who themselves implement the policy of torture and arbitrary deaths promoted by the Government. Less impartial and independent you could not be....

This legitimization of the regime also occurs in the midst of serious silences, the most notable: arbitrary deaths. As of May 25, there were only 6 in Mariona, now there are more than 50 in different prisons. At least have they required forensic reports or verified the role of prosecutors?

Yes, it is very serious that a Procurador remains silent in the face of systematic human rights violations and does not listen to the cries of the victims. But it will be more serious when it is linked to an official propaganda apparatus that seeks to hide the crimes.

Very sad, but the PDDH video reminds us of the manipulation by Nazi propaganda about Theresienstadt, a false "Jewish paradise", propaganda which actually sought to lie to the world about the Holocaust.

The Tobar who today allows himself to be used to prop up the image of the Bukele State of Exception is a far cry from the Tobar of 2020 who suited up in PPE at the beginning of the pandemic and went, unescorted by government officials, to talk through windows to persons confined in "contention centers" by Bukele at the beginning of the pandemic. That Tobar issued statements pushing back against public dictates of Bukele locking up persons during the pandemic lockdown.

That Tobar urged the branches of government to enter into dialogue and offered to mediate, the day before Bukele marched into the Legislative Assembly with armed troops on February 9, 2020.

But today, Tobar appears more content to provide a blessing to the actions of Bukele's government. Even before the State of Exception, human rights experts were expressing concern about Tobar's newfound appreciation for the Bukele government. Jose Marinero, President of the Democracy, Transparency and Justice Foundation (DTJ), told El Diario de Hoy in January:

With his statements and his evident silence in recent months, the Procurador is doing profound damage to the credibility of the institution he heads and this is particularly serious when most controls on political power have disappeared in the country.

At a time when virtually every institution of the Salvadoran state answers to the wishes of Nayib Bukele, it appears that the PDDH, set up in the consitution to be an independent advocate for the human rights of the people of El Salvador, has lost the courage to fulfill its role.
Human Rights PDDH State of Exception