The military and expert witnesses to the El Mozote massacre 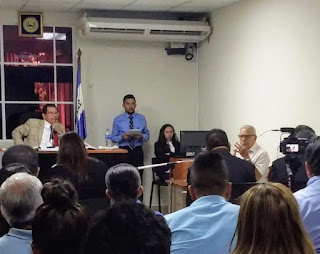 Sixth in a series

Over the five years since the El Mozote massacre case was reopened, Judge Jorge Guzman has heard not only from the the humble campesinos who are witnesses and victims, but also from witnesses from the Salvadoran military and from experts. Although the victim witnesses have established the existence of a massacre, they themselves cannot draw the lines of responsibility to the colonels and generals who gave the command for the massacre.

The military witnesses
Two soldiers who participated in the military operation at El Mozote testified in November 2019 with their identities protected. "Juan" and "Sol" testified using pseudonyms and from behind a screen to protect their identities. Both soldiers confirmed that those killed during December 1981 were unarmed civilians rounded up out of their homes and murdered. Neither soldier testified to participating himself in the shooting or rapes.

Juan and Sol testified that soldiers took residents - children under 10, elderly women and men - from their homes and shot them. "How were they dressed?" asked one lawyer for the prosecution. "Humbly," Juan said. Juan said that the soldiers killed for "pleasure".

Sol said women and children were rounded up and taken to the church in the centre of the town. He recounted hearing gunshots and the screams of women and kids.

David Morales, a prosecuting lawyer, said he believes the new testimony helps establish the chain of command and solidify the role of high-ranking military officers in the massacre.
"The witness confirms clearly what the victims and survivors have said - that troops of the Atlacatl Battalion arrived to these previously designated places in northern Morazan and exterminated people," said Morales, who is also the director of strategic litigation for Cristosal, a San Salvador based human rights organisation. "It also clear that these acts came from higher orders and that the Atlacatl Battalion carried out orders from the state."

A lengthy summary of the testimony of the soldiers is provided (in Spanish) by Nelson Rauda here.

One defendant, Juan Rafael Bustillo, has also taken the stand in his own defense. In 1981, Bustillo was the general in charge of El Salvador's air force.
In his testimony, Bustillo was at pains to distance himself from the chain of command over the massacre, but he did not attempt to deny that a massacre had taken place. This was an important break from the stance the Salvadoran military defendants have always taken in the case. Despite the overwhelming forensic evidence and despite apologies for the massacre issued by Salvadoran presidents and commanders-in-chief Mauricio Funes and Salvador Sánchez Cerén, the military in El Salvador has always claimed that any deaths at the massacre site were of guerrilla combatants or of persons caught in exchanges of gunfire between the army and guerrillas.

Bustillo, on the other hand, referred to the massacre as a "locura" or insanity initiated by Colonel Domingo Monterrosa, commander of the elite Atlacatl Battalion. "Locura" is also the word that the UN Truth Commission used in the title of its 1993 report to describe the atrocities of El Salvador's civil war.
Domingo Monterrosa was killed in a guerrilla operation in 1984.  None of the other high military officer defendants have taken the stand in their own defense.
The forensic experts
Key confirmation of the grisly facts of this massacre came from work begun in 1993 by the Argentine Forensic Anthropology Team.   This team has produced evidence from the mass graves of atrocities in throughout the world, and they led the exhumations and analysis of the remains of massacre victims at El Mozote and surrounding areas.  In August 2018, team members Silvana Turner, Mercedes Doretti and Patricia Bernardi provided scientific analysis of the cold facts of the massacre at El Mozote.
In the years following the conclusion of El Salvador's civil war, this team excavated several sites where the victims of the 1981 massacre had been found. Their testimony provided a portrait of the scale of the horror -- piles of small bodies, examinations of bones of small children who perished, bullets manufactured in the US and fired from M-16 rifles, and more forensic proof as the evidence piled up to confirm the massacre committed by Salvadoran armed forces.
Their conclusion, expressed by Mercedes Doretti:

There is no evidence that supports the argument that the victims, almost all small children, had participated in combat or had been trapped in crossfire between forces in combat. On the contrary, the evidence decidedly supports the conclusion that they were intentional victims of a massive extra-judicial execution.

The chain of command experts
The week of April 26, 2021 the trial in the case departed from the small courtroom in San Francisco Gotera for a large meeting room in a local hotel.  The new location was not just for COVID safety reasons, but also because of the expected significance and interest in the testimony.   The court also arranged to have the testimony live streamed over the internet.

1. Military leaders feared the development of a safe zone controlled by FMLN in Morazan.
2. They developed a plan of extermination which did not distinguish between civilians and combatants.
3. The High Command and the General Staff were in control of strategy and war operations.
4 Military leadership was responsible for planning, carrying-out and covering up the massacre.
5. Given the size of the operation only the High Command and General Staff could be in charge.
6. The officers in the field in Morazán, colonels and lieutenants, were responsible for transmitting the orders to carry out the massacre.

In addition to these six areas to establish the criminal responsibility of the high military officers who are defendants in the case, Karl also emphasized the role and responsibility of the US surrounding the massacre.
Clever Pino Benamú, a retired Peruvian military officer, testified as an expert on counter-insurgency doctrine in Latin America.   It was a doctrine, originating from US policy, which focused on the "internal enemy" -- those who would be the support for leftist insurgents.
Pino told the court that the attacks against the civilian population in Operation Rescate had two goals.  One was an operation against a population which was seen as helping the guerrillas and was therefore the enemy.  The massacre had a second "multiplier effect" by showing to civilians in other areas “Look at what is going to happen if you help the guerrillas.”  These are the perverse effects of the counter-insurgency doctrine under which they were operating.
Pino saw this as well in the rapes and sexual violence observed in the attack on the campesinos living around El Mozote.  Rape in war has the purpose of breaking the will of the survivors;  it sows fear in  neighboring populations so they don’t help your enemy.
Pino pointed to the systematic denial of the facts of the massacre by the military as part of disinformation and psychological warfare in this new type of war.
Analysis of the proceedings so far
It is of fundamental importance for El Salvador that even the defense lawyers are no longer arguing about the fact that a massacre occurred.  For decades the ongoing myths of the disinformation campaign continued to circulate in El Salvador that there had been no massacre, or that those killed had been FMLN combatants.  Now, the defense argues to eliminate individual responsibility of particular military officers, but the fundamental fact is now acknowledged that the Salvadoran armed forces committed this atrocity.
As this trial continues 40 years after the events in question, persons have questioned what purpose is served.  Doesn't a war crimes trial like this just open old wounds which the country wants to heal?   But as I closely observed the victims' families in that courtroom, I was watching wounds being healed.  There they were, humble inhabitants of rural El Salvador, and the most powerful generals of that period in El Salvador are facing justice.  They saw experts from around the world validating their claims. They watched as one of the generals, Bustillo, faced questioning in a courtroom about what had happened to their loved ones.  In their bearing, in their interactions with the press and their advocates, and in the attention they paid to Bustillo, I saw persons who had their worth affirmed through this process. For whom the most important thing was to hear "Yes, your family members were slaughtered.  Yes, it was a crime against all humanity stands for.  And yes, a court in your country believes you have the right to learn the truth and see justice done."
For more on the testimony of the military and expert witnesses, see:
A General On the Stand
Trial Expert to Explain Salvadoran Military Leaders’ Responsibility for El Mozote Massacre 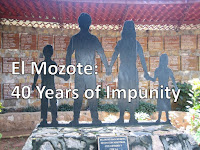 Is ICE closing in on Colonel Mario Reyes Mena, alleged by the UN Truth Commission and the 1982 U.S. Embassy "boots on the ground" investigators, to have planned and given the kill order that led to the ambush of four Dutch journalists and their deaths?