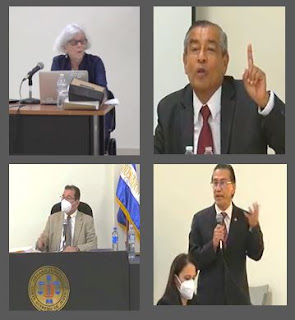 Friday concluded an historic week of testimony in the El Mozote massacre case. The court heard from two expert witnesses regarding the responsibility of the military officer defendants.   While most of the prior testimony in this case has dealt with the horrific events of the days of December 1981 in the hamlet of El Mozote and surrounding communities, this testimony dealt with the command responsibility of the former military leaders now on trial and the broader context of the war against a civilian population being waged by the Salvadoran military. Importantly, this testimony also brought into sharp focus the important (and shameful) role of the US in motivating and covering up this massacre.
Conclusion of Karl testimony
On her third day on the witness stand, Stanford professor Terry Karl faced questioning by the lawyers for all the parties. The morning session included questioning from the victims' representatives and the attorney general's office.  For the most part, this questioning went over subjects already covered by Karl in her two day initial presentation of her conclusions.

Karl was asked by one lawyer "Why were children killed?"  She responded "As a person with a family , I can't understand it."   She continued, for the military, in its logic, a child could grow up to be a witness. Their command, Karl had testified, was "leave no witnesses."

In another answer, the professor stated her belief that Domingo Monterrosa, commander of the elite Atlacatl Battalion, was surprised at the quantity of people when he arrived by helicopter in El Mozote.  According to Karl, he probably arrived in the first instance just to see if the area was secured. The troops had pulled people out of their houses, let them return, and then pulled them out again, suggesting the units did not know what to do prior to Monterrosa's arrival.  There were too many people to be interrogating them all.

Karl testified, "I don’t think there was any way he could order 'leave no witnesses' on his own account.   There are interviews with him, by militares and journalists, where he said that if you want to know what happened at Mozote, 'ask [Minister of Defense] Garcia'."

Karl believes that Garcia subsequently lied because he knew the implications of his responsibility for actions which “shock the conscience” of humanity.

One new line of questioning came from the attorney general's office when Karl was asked about funders of the Salvadoran war. Karl said that she had not prepared to answer this question of funding which was outside the scope of her report, but indicated that besides the aid from the governments of the US and Chile, there was ample proof that private sector actors had also provided support. Roberto D'Aubuisson, extreme right wing leader of death squads, made frequent trips to Miami to see the so-called "Miami millionaires."   Supporters were often connected with the World Anti—Communist League.

Karl indicated that names of funders of activities from the right wing could also be found in an article by Carlos Dada published in El Faro titled How We Killed Archbishop Romero.  Here is the relevant excerpt from that article:

According to declassified documents from the U.S. Department of State, [Roberto “Bobby”] Daglio spent the early eighties meeting with other businessmen from the extreme right in a group called the “Miami Six,” which funded the illegal operations of D´Aubuisson’s group. The latter engaged in terrorism: it ordered murders and kidnappings, set off explosives and funded death squads. Its aim was to destroy any attempt at reform in El Salvador and to finish off all the communists.

According to State Department documents from 1981, group members also included the owner of the rabidly right-wing Salvadoran daily El Diario de Hoy (identified in some documents as “Viera Altamirano” or “Enrique Viera Altamirano” and in others simply as Enrique Altamirano, who is still the director of the newspaper); Luis Escalante; Arturo Muyshondt [in this case, former U.S. Ambassador Robert White admitted in an interview with El Faro that he made a mistake with Mr. Muyshondt. "I am sure the source meant to mention his brother, Roberto Muyshondt”] and the Salaverría brothers (Julio and Juan Ricardo).

Daglio, along with Enrique Altamirano founded the “Freedom Foundation” or Fundación para la Libertad, in Miami. They hired Fraser Associates to carry out lobbying efforts in Washington. Fraser promised to change the United States’ perception of El Salvador, which was being influenced by “sensational journalists who headline the massacre of American nuns and photograph military excesses” rather than the “significant efforts by the private business sector to respond to the legitimate aspirations and interests of the Salvadoran people.”

The cross-examination of Karl by lawyers for the defendants followed a couple of lines. One set of questions asked about the various juntas which were governing El Salvador in the early 1980's, in light of a defense theory that the armed forces were under the command and control of the junta. Karl refused to move from her position that in military matters, the Minister of Defense and the High Command ultimately held all the power.

A second line was to point to responsibility of the US. Karl acknowledges that the US has "great responsibility" for events which transpired during El Salvador's civil war.  But it is not clear that US support can function to exonerate these defendants.

The third line was probing Karl's sources for her opinions. These questions pointed out how much work Karl had done which took place before she had been sworn in as an expert witness (for almost 20 years or more prior, in fact).  They pointed out where she was relying on anonymous sources or relying on reports prepare by human rights organizations or other authors.  Presumably these questions plan to set up a future argument about the admissibility of Karl's opinions under Salvadoran law based on the types of sources.

Asked how she felt about her expert work, Karl testified “It was an honor to use my capabilities as an expert in the service of this country."

Testimony of Clever Pino Benamú
On Friday, Clever Pino Benamú, a retired Peruvian military officer testified as an expert on military matters.  In Peru, Pino had been in charge of a counter-insurgency battalion.  He said he has also testified as an expert in six cases of human rights abuses by the military in Guatemala.
Pino began with the source of counter-insurgency warfare in Latin America.  The US had begun to fear the "falling dominoes" of countries in the world coming under communist domination.  In its global national security strategy, the US developed the new concept of the "internal war" and for that you need a new enemy – the enemy was not external, was not the country on your borders, any more.  The new enemy was within.  There were no longer physical borders, but ideological frontiers defining enemies.
It is most common to say that “communists” were the internal enemies.  But the definition was broadened to be almost anyone who did not agree with the right wing governments of the time.  So "internal enemy" came to include students, union activists, religious leaders, journalists.  And the entity deciding who was an internal enemy was the military and security forces.
The US further developed the concept of counter-insurgency to fight the internal enemies.  The internal enemy is nourished by, and sustains itself off the population. The population is the water supporting the fish.
The first thing the army needs is military intelligence for this new counter-insurgency warfare, testified the Peruvian colonel who had himself commanded counter-insurgency troops. So the US helped create military intelligence units which many Latin American countries did not have at that time. The US then began equipping them and training them in contra-insurgency tactics.  Most Latin American countries at time were in possession of armaments and equipment from the second world war, and their training centered around conventional war with neighboring countries. The US taught strategies of psychological warfare against this new kind of internal threat.
According to Pino, the School of the Americas was considered #1 by Latin American countries, and they selected their best and brightest to be trained by US Southern Command at SOA.  A series of military leaders from all of Latin America  passed through the school and absorbed the new counter-insurgency doctrine.
He testified that in El Salvador, this National Security doctrine promoted by the US was phrased as one of preservation of national culture, and a binary division of the world into capitalist and communist. The doctrine of the internal enemy was adopted, and this is the doctrinal perversion which affected so much in El Salvador and throughout Latin America. The National Security doctrine also gave Latin American militaries a reason for their ongoing existence and in some countries the military displaced civilian authorities.
Pino spent a significant amount of time in his primary testimony going through the basic structures and doctrines of a nation's armed forces in Latin America, from the level of the unit engaged on the ground up to the colonels and generals of the General Staff ("Estado Mayor").
Pinto told the court that the attacks against the civilian population in Operation Rescate had two goals.  One was an operation against a population which was seen as helping the guerrillas and was therefore the enemy.  The massacre had a second "multiplier effect" by showing to civilians in other areas “Look at what is going to happen if you help the guerrillas.”  These are the perverse effects of the counter-insurgency doctrine under which they were operating.
Pino sees this as well in the rapes and sexual violence observed in the attack on the campesinos living around El Mozote.  Rape in war has the purpose of breaking the will of the survivors;  it sows fear in  neighboring populations so they don’t help your enemy.
Pino pointed to the systematic denial of the facts of the massacre by the military as part of disinformation and psychological warfare in this new type of war.
The cross-examination of Pino by the defense picked at various aspects of his testimony -- did he know how many troops a Huey helicopter carried? what were the caliber of shell casings found at the massacre site?  who were his sources? etc.   Like Karl, he remained firm on his basic point that Operation Rescate and the massacre was something planned and orchestrated at the highest levels, and those officers at the highest levels down to those who followed illegal orders are responsible.
At the end of the week

As Carlos Dada, founder of El Faro noted in an online event Thursday night, of fundamental importance for the country is that even the defense is no longer arguing about the fact that a massacre occurred.  For decades the ongoing myths of the disinformation campaign continued to circulate in El Salvador that there had been no massacre, or that those killed had been FMLN combatants.  Today, the defense is arguing to eliminate individual responsibility of particular military officers, but the fundamental fact that the Salvadoran armed forces committed this atrocity is now acknowledged.