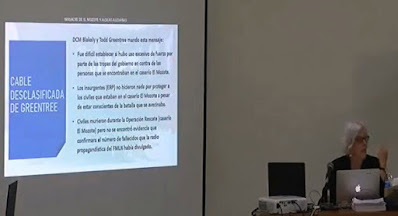 Today Stanford University professor and leading expert on human rights abuses by the military during El Salvador's civil war, Terry Lynn Karl took the witness stand in San Francisco Gotera.   She was there to testify about the responsibility of the military chain of command for the December 1981 massacre in El Mozote and surrounding communities.

At the outset Karl stated that she would testify in six key areas:

After describing her qualifications, sources and methodology, Karl said she would be like to start at the end -- with the cover-up of the massacre. A cover-up which she calls "very, very sophisticated" by the Reagan administration in the US as well as by El Salvador's military. And for a while it sounded like this was a trial about the US responsibility rather than the roles of more than a dozen Salvadoran army officers.

She described how the US embassy sent out staff to check on reports of a massacre and the Salvadoran military prevented the staff from arriving in the area and told the staff they were under orders not to talk.   When the staff reported this to the embassy, a cable to Washington misrepresented what the embassy knew, because Ronald Reagan was about to certify to Congress that El Salvador was making progress on human rights and a massacre like this would not look good on that record.

After the New York Times and Washington Post published stories about the massacre at the end of January 1982, Elliot Abrams led a fierce campaign to discredit the journalists and their reports.

Karl's point was that the US knew plenty about El Mozote and other massacres, and when the US went to talk to the person in a position to stop the atrocities, they went to Guillermo Garcia, the Minister of Defense, not to any civilian in government.   This would culminate with a trip of Vice President George H.W. Bush to El Salvador in 1983 where he went with a threat to cut off military aid if human rights abuses did not stop and insisted on meeting with Garcia.

Much of Karl's testimony kept coming back to Garcia. Her point was that in the years 1980-81, no one had any doubt that there was no civilian control over the military in El Salvador and Garcia was on top in the military as Minister of Defense.  She described how the hard liners in the military, the "duros," led by Garcia had consolidated their control throughout.  With their control, Karl called it a "green light for terror."

This focus on a lack of civilian control was certainly in response by a statement by Garcia in an earlier hearing that he and the other officers were simply following direction from the junta running El Salvador at that time, nominally led by Jose Napoleon Duarte.  Although the junta had one general as a member, that general came from the administrative and not battlefield side of the armed forces and was no equal to Garcia.

Whether it was called Plan Argentina or Plan Jakarta or "tierra asada" or total war, the hard line military had a strategy of terror.  Karl spent some time describing her research showing a pattern of massacres at this period in the conflict reaching a high point in the El Mozote massacre.  The pattern of mass killings of more than 10 people reached at least 12 of El Salvador's 14 departments.  This pattern, according to Karl, establishes that the massacre at El Mozote was not something unique, but part of a specific strategy.

You can watch full recordings of Terry Karl's first day of testimony on the El Salvador Perspectives Facebook page:

The live feed will continue to be shared there each day this week while the hearings continue.