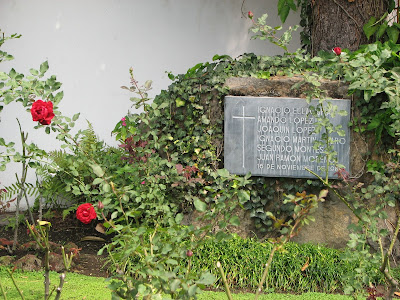 Today, November 16, 2021, is the 32nd anniversary of the 1989 murder by Salvadoran troops of six Jesuit priests, a female co-worker and her daughter at the José Simeón Cañas University of Central America (UCA) during El Salvador's civil war.

This past year has passed without any developments for the ever more remote possibility that the intellectual authors of the massacre will face justice in a court in El Salvador.  As noted for last year's anniversary, the criminal chamber of El Salvador's Supreme Judicial Court issued a ruling dismissing all charges against the senior military command alleged to have participated in the orders and cover-up of this crime. Nothing has happened to change that result, although the Jesuits at the UCA have charged two of the magistrates involved with malfeasance.

Update:  This morning, November 16, El Salvador's current Attorney General filed a legal pleading with the Constitutional Chamber to set aside the ruling of the criminal chamber dismissing the case against the military command.  Afterwards, Nayib Bukele tweeted:

The UCA asked for this for 3 decades ... 3 decades ... With vigils, pronouncements, at conferences, in the press, in books, communiqués, interviews, demands and a long etcetera. I imagine they will be very happy that, at last, their request for justice will come true.

Still, the example of the Jesuit martyrs at the UCA lives on. The UCA continues to be a prominent voice advocating for human rights, the rule of law, social justice, and alleviation of the circumstances faced by the most marginalized sectors of Salvadoran society.

As a result,  Salvadoran president Nayib Bukele (who was enrolled at the UCA for a brief period before dropping out) now regularly attacks the UCA from his Twitter account.   For example, on November 4 he tweeted:

All the masks have now fallen away. It's unbelievable how [the UCA] fooled us for so long. Interesting times. (in response to statements by an UCA human rights lawyer criticizing the selective prosecution of certain ARENA members)

The good thing is knowing who sponsors both. The bad thing is seeing an institution, once admired, hit rock bottom ... $$$ (asserting that an ARENA deputy and UCA were acting in concert)

In addition to crying out for justice, the martyrs tell us that it is not possible to live or develop humanely in a society that promotes hatred and shouting. They remind us that we must all have the courage to build a peaceful coexistence and defend basic democratic principles such as judicial independence, access to public information and the defense of human rights.

And at Saturday night's commemoration of the 32nd anniversary, the rector of the UCA, Andreu Oliva, stated:

While political decisions have taken us further away from the democratic path and lead us to authoritarianism and militarism; the martyrs of El Salvador continue to be a source of inspiration to reaffirm our commitment to continue alongside those most impoverished.