31st anniversary of massacre of Jesuits in El Salvador 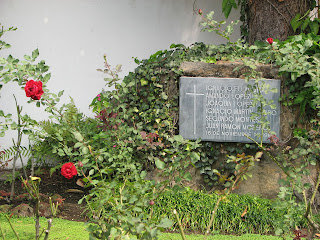 Today, November 16, 2020, marks the 31st anniversary of the massacre by Salvadoran troops of six Jesuit priests, a female co-worker and her daughter during El Salvador's civil war.   With the global pandemic still being felt in El Salvador, the annual commemoration was necessarily different.   The University of Central America ("UCA") has been required to conduct all classes online since March, along with all other education institutions in the country, and its campus is closed.   Instead, the anniversary was marked with an online vigil on Facebook and YouTube which you can watch here.

The past year has been full of developments, positive and negative, for the search for justice for the atrocity.  That search is now in its fourth decade.

The positive development was the judgment of guilt and the sentence to 133 years in prison for former Salvadoran colonel Inocente Orlando Montano rendered by a court in Spain.  The court took jurisdiction of the case under principles of universal jurisdiction for crimes against humanity and the Spanish citizenship of 5 of the six murdered priests.   It represented the first full-fledged criminal trial under proper procedures where the world heard the testimony of actual witnesses to the events and to the subsequent government cover-up at the top levels of the Salvadoran military and civilian government.

But Montano was the only defendant from the Salvadoran high command on trial in Spain.   The rest of the high-ranking officers implicated as intellectual authors of the massacre have always been protected from extradition by the Salvadoran courts.   In spite of this, the Jesuits in El Salvador and their lawyers have made calls following Montano's conviction for a long-stalled criminal prosecution on Salvadoran soil to actually proceed.


Arnau Baulenas, a lawyer with the Human Rights Institute at Central American University — a school run by the Jesuits and the site of the 1989 murders — said Montano’s conviction and sentence in Spain showed that the orders came from high up. He blames a lack of political will and resistance within El Salvador’s justice system for being unable to achieve similar outcomes there.

Any hopes for progress in El Salvador were dealt a serious setback last week, however, as the Criminal Law Chamber of El Salvador's Supreme Judicial Court declared as an "absolute nullity" all of the pending criminal proceedings against the high military command in the Jesuit massacre case.   The court found that the passage of time and the flawed 1991 trial in the matter precluded additional attempts to prosecute generals and other high command staff.
The Jesuits of the UCA subsequently issued a statement rejecting that ruling:

Faced with a ruling that seriously offends the rule of law and that endangers all efforts made in favor of a transitional justice law that honors the victims of the armed conflict, the Society of Jesus and the UCA will take the appropriate and necessary legal actions in favor of justice, social peace and reconciliation around the right to the truth. As Pope Francis affirms in his last encyclical, “the peace process is a constant commitment over time. It is a patient work that seeks truth and justice, that honors the memory of the victims and that opens, step by step, to a common hope, stronger than revenge ”. And justice in the case of the murders of Elba, Celina and the Jesuits is an important step to banish impunity and establish more decisively respect for the human dignity of all Salvadorans, especially victims of any type of abuse.