Bukele pushes back as US places top judges on "Engel List"

US relations with Nayib Bukele's government in El Salvador hit a new low this week.  The Biden administration expanded its Engel List on Monday, September 20, by adding the five magistrates of El Salvador's Constitutional Chamber to the list of corrupt actors who undermine democratic institutions. The announcement from the US State Department declared:

Elsy Dueñas De Aviles, Oscar Alberto López Jerez, Hector Nahun Martinez Garcia, Jose Angel Perez Chacon, and Luis Javier Suárez Magaña, current Magistrates of the Constitutional Chamber of the Supreme Court, undermined democratic processes or institutions by accepting direct appointments to the Chamber by the Legislative Assembly. The previous five Magistrates were abruptly removed without legitimate cause following the May 1 seating of the newly elected Legislative Assembly. After being installed, the new Magistrates declared their installation by the Legislative Assembly to have been constitutional. The Magistrates undermined democratic processes or institutions by approving a controversial interpretation of the Constitution authorizing re-election of the President despite an express prohibition in the Constitution forbidding consecutive terms of the Presidency.

Twenty minutes after the US announcement, Bukele responded, tweeting: 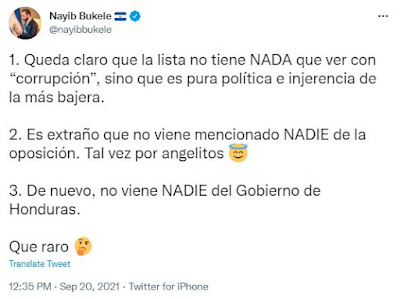 1. It is clear that the list has NOTHING to do with "corruption", but is pure politics and interference of the lowest sort.

2. It is strange that NO ONE from the opposition is mentioned. Perhaps for being little angels 😇

3. Again, NO ONE from the Government of Honduras comes up. How odd. 😉

Acting US Ambassador to El Salvador Jean Manes said the US action was taken because the magistrates voted to allow the president’s re-election “which is clearly not allowed under the Constitution."   Wednesday morning she appeared on a local Salvadoran news talk show to explain the US motivation. “What are we seeing now? It is a decline in democracy, and that is exactly what is happening,” Manes said.  "It is incredibly lamentable that we are in this situation"   Bukele is "following a playbook"  like Nicaragua or Venezuela.

Bukele continued tweeting aimed at the US over the next two days.   He tweeted "we are not the backyard of anybody." And tweeted several news stories about the mistreatment of Haitian migrants at the southern US border and the US drone attack which killed children and other civilians as the US evacuated Afghanistan.  In one series of tweets, Bukele took aim at a statement by Manes that "when you had an independent attorney general we supported corruption prosecutions."   The tweets ridiculed the idea that prior attorney generals had acted with independence.

If you invite a friend to your house, he can bring a gift,
something small to accompany the dinner, or not bring anything.
If he wants to bring something, it can be something small or symbolic.
What he can't do is hope to arrive and command your house.
For that friend it's better not to invite them again.

The Chinese ambassador and Bukele wasted little time in making the point that the Asian country was a good friend of El Salvador, with Bukele retweeting the offer of China to join in rebuilding the San Miguelito market in San Salvador which suffered a major fire earlier in the day.

The US has now ramped up its rhetoric aimed at Bukele's actions, and the magistrates, and possibly their family members, will lose visa privileges for travel to the US.   However, Bukele has already shown that US words do not prompt him to change course.  Instead, he uses US criticism to show his supporters that no one can bully him around.  Bukele can take advantage of a long history of US interventions in the region to find a receptive audience for standing up to Washington.  Actions do speak louder than words, but US actions so far have had little impact on Bukele's trajectory in power.