It is pretty obvious that the US does not know what to do about the president of El Salvador, Nayib Bukele.  Bukele has made it clear that he rejects the criticism from the US and will not allow it to influence his actions.
So there is little reason to anticipate any impact from the US statement reacting to the ruling of the Constitutional Chamber that a president may now be reelected for successive terms in office:

The United States government condemns the September 3 ruling by the Constitutional Chamber of the Supreme Court of El Salvador, which authorized immediate presidential re-election in contravention of the Salvadoran constitution.  The Salvadoran constitution clearly prohibits presidential incumbents from re-election to a consecutive term.  This ruling is a direct result of the decision on May 1 by the Salvadoran Legislative Assembly to remove the sitting justices of the Constitutional Chamber and install replacements loyal to the President.

Interim US Ambassador Jean Manes in a subsequent press conference compared Bukele to Venezuelan leader Hugo Chavez who "was democratically elected but, step by step, tried to gain more power."

Yet Bukele's continuation down a path of consolidating power, without concern to opinions coming from Washington, could reflect a calculation on his part that the US policy has so far involved stern words, but has little practical consequences.

The messaging coming out of the US Embassy in El Salvador is confusing at best.  For example, when El Salvador's Legislative Assembly passed a law removing one third of the country's judges, Manes tweeted only that the law changes "nos preocupan" (worry us).  And then her very next tweet said "We will continue cooperating with El Salvador strengthening its naval capacities." 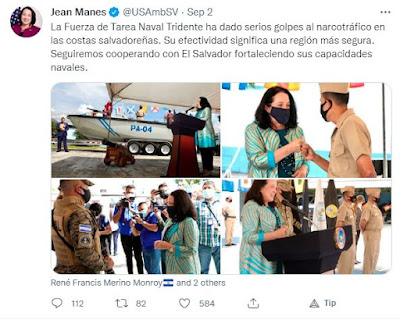 Manes' naval capacity tweet had been preceded a week earlier by Manes highlighting a US donation of eight helicopters to the Salvadoran air force along with four more helicopters on the way: 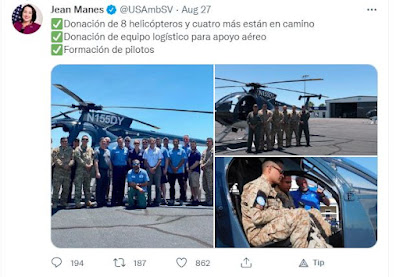 One week ago, after the Legislative Assembly had already passed the law removing a third of the judges, Manes and the Embassy were tweeting out images of her visit to a new liquefied natural gas plant built by US firm  Invenergy.  That was a strange publicity choice since Bukele's government has repeatedly touted the Invenergy plant as an endorsement of his presidency and vision for El Salvador and the resulting investment climate in the country.   When the US is trying to say that Bukele's changes to the judicial system and separation of powers will discourage investment, to highlight this billion dollar investment by a US firm sends the opposite message. 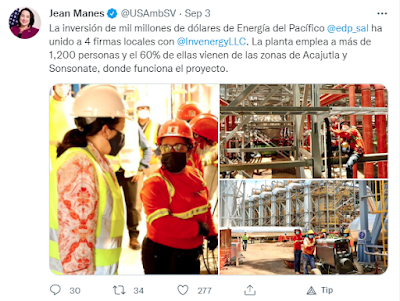 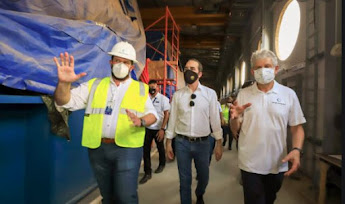 Bukele visit to the same plant
Bukele has rejected the pressure from the US as a throwback to historic instances of US interference in the local affairs of Latin American countries. In one tweet Bukele simply wrote "United Fruit Company," a reference to the US interventions in Central America on behalf of the United Fruit Company including CIA support of a 1954 military coup in Guatemala which overthrew a democratically elected government.  In another tweet, Bukele referred to the Engel List of corrupt officials as part of “the same recycled tricks from 200 years of colonialism.”

Part of the US reluctance to withdraw meaningful support from El Salvador in response to Bukele's actions also reflects concerns about China's intentions for the region.  An NBC News article described US nervousness about Chinese plans to develop port facilities at La Union:

American intelligence and military officials say the port project would give China a significant economic and strategic foothold in what has traditionally been an American sphere of influence...."You have a new generation of governments, that if they wish to engage in corruption and protect themselves from the consequences, they are able to turn away from Western investors in the U.S. and turn to China as an alternative," Evan Ellis, [a research professor of Latin American studies at the U.S. Army War College Strategic Studies Institute] said. "China has become effectively an incubator of populist governments."

One area where US-China competition has played out in El Salvador is vaccine diplomacy.   Both countries have facilitated deliveries of COVID-19 vaccine to El Salvador, some purchased and some donated.  China was first on the scene with the arrival of 2 million doses of Sinovac vaccine which El Salvador purchased, but since then, the US has donated some 3.2 million doses to El Salvador.   And while the US would say the vaccine is delivered to support the health of the people of El Salvador, every arriving shipment is filmed and broadcast on social media by the government's communication arm.  Bukele can tweet out daily vaccination totals while self-proclaiming that his government has managed the pandemic better than any other country in the region.

In reality, the US has few tools with which to alter decisions of Nayib Bukele.  Some suggestions for pressure by the US were described by Prof. Naomi Roht-Arriaza in a piece at Just Security:

The United States could take another look at Bukele’s family and friends, who are his closest advisors, as well as legislators from his party, to assess whether they could be sanctioned under the Global Magnitsky Act or other sanctions laws; ditto regarding Guatemala. The Department of Justice could look at ties between powerful actors in both countries and money laundering or other wrongdoing in the United States. El Salvador is negotiating a new debt agreement with the International Monetary Fund; the United States could use its leverage to insist that the IMF, World Bank, and other multilaterals not lend to a country with rapidly deteriorating rule of law. It could also support civil society groups in both countries, including in their efforts to create region-wide anti-corruption coordination.

The US says its policy towards El Salvador and the other countries in the Northern Triangle of Central America is focused on addressing the root causes of migration from the region.   So far neither Bukele's plans for the country, nor US policies, have done anything to slow the steady increase in migration north, with an average of more than 400 Salvadorans per day being detained crossing the US border each day during July: 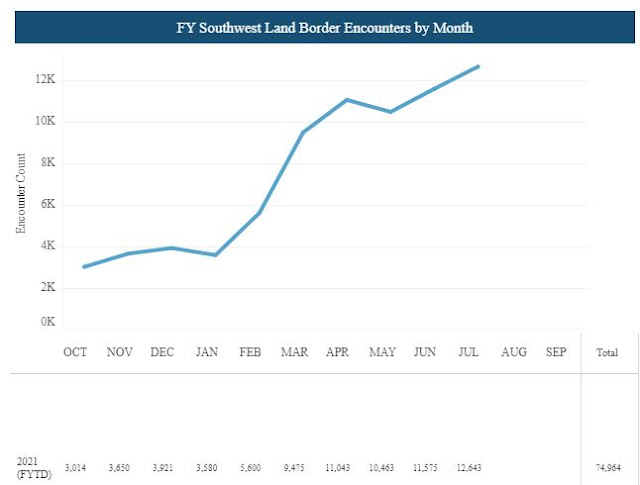