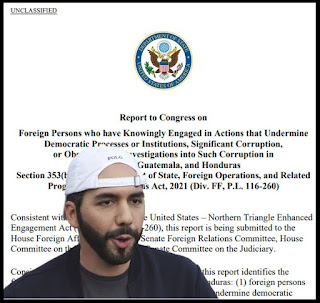 On July 1, the US State Department released the long anticipated “Engel List” of corrupt figures in the Northern Triangle of Central America who will lose visa privileges to enter the US and can face other possible sanctions.  The list is viewed by the administration as a tool against corruption which Washington believes is one root cause of migration towards the US.  The Engel List included 14 individuals in El Salvador including several members of the government of president Nayib Bukele, who has been in a vocal dispute with the Biden administration over his government’s adherence to the rule of law.

US Secretary of State Anthony Blinken described the new report in his statement accompanying its release:

[A] public list ... of individuals who have knowingly engaged in acts that undermine democratic processes or institutions, engaged in significant corruption, or obstructed investigations into such acts of corruption in Guatemala, Honduras, and El Salvador.

The report lists a total of 55 individuals in the three countries.  Here is the El Salvador section of the report:

The names highlighted in red above are four current and two recent members of the Bukele administration.  (Somewhat inexplicably, the name Guillermo Gallegos did not appear on the Engel List, despite having appeared on a similar listing of corrupt actors which State provided to Rep. Norma Torres earlier this year).

In a press conference, the US Special Envoy to the Northern Triangle, Ricardo Zuniga, stated that this first edition of the Engel List was a starting point to which names could be added in the future and that the US State Department focus in the document was on more recent events and on persons currently in office in order to deter future corrupt activity.

The ranking diplomat in the US embassy in El Salvador, Jean Manes, was quoted saying:

The publication of the Engel List is a tool to help Salvadorans construct a prosperous future... This vision of prosperity is only possible if we fight corruption at its root. Corruption corrodes public trust, obstructs effective governance, and impedes the necessary investment and development to allow citizens to prosper...The Engel List allows for immediate action against actors abusing their power for personal gain.

Nayib Bukele was not happy.  Bukele’s response to the release of the Engel List was threefold:

First, the current Salvadoran president rejected the pressure from the US as a throwback to historic instances of US interference in the local affairs of Latin American countries.  In one tweet Bukele simply wrote "United Fruit Company," a reference to the US interventions in Central America on behalf of the United Fruit Company including CIA support of a 1954 military coup in Guatemala which overthrew a democratically elected government.

In another tweet, Bukele referred to the list of corrupt officials as part of “the same recycled tricks from 200 years of colonialism.”

My warmest congratulations to the people of the United States of America on Independence Day.

It took a lot of courage to fight for your freedom and sovereignty, so your destiny wasn’t imposed by someone else.

Second, Bukele insisted that his government and its newly installed attorney general were pursuing the true corrupt actors in El Salvador.  He tweeted

Thanks for the list, but in El Salvador we have our own.  #TheTrueList

Bukele asserts his government’s list contains 400 names, although there is no word on whether that list includes anyone who has held office in Bukele’s administration.

Shortly after giving birth to the "#LaVerdaderaLista" hashtag, one of Bukele's meanings became clear.  Heavily armed police and security forces swarmed the civilian headquarters of the country's largest opposition political party, ARENA, accompanied by the press and government video crews. They were ostensibly there to seize assets to reimburse the Salvadoran state for disaster relief funds diverted to ARENA coffers following the 2001 earthquakes, according to a  statement of current Attorney General Rodolfo Delgado.

The relief funds in question had been sent by the government of Taiwan in 2001 to the former Salvadoran president from ARENA, Francisco Flores. An investigation showed that the bulk of those funds had gone into political campaign efforts of the ARENA political machine.  Flores was taken into custody on the corruption charges and eventually died before he reached trial. No one else was charged in connection with the event at the time, and before now the Salvadoran justice system had never moved against ARENA to recover that money.

But it was also clear that Bukele intended to score publicity points with the raid on ARENA's headquarters in San Salvador.

Bukele tweeted that the government should make manhole covers out of a statue of Roberto D’Aubuisson, the founder of ARENA, and the death squad organizer who ordered the murder of archbishop Oscar Romero among many others.  (I won’t shed any tears for the removal of statues and images of D’Aubuisson).

Bukele tweeted “Felicidad” (happiness) accompanied by a video of the raid on the ARENA office.

He tweeted images of documents purportedly found in the ARENA headquarters authored by universities and civil society organizations who have criticized him and implying this was proof of a broad opposition conspiracy.  But, as the universities pointed out, the president was trying to mislead the public since these were simply documents of a coalition proposing various electoral reforms, and were widely disseminated on various websites and social media.

ARENA vowed not to be deterred from its opposition efforts by this raid on its offices.

The Salvadoran president announced he was seeking an across the board increase of 20% in the country's minimum wage levels.  He also announced that the government would subsidize that increased cost for one year for all micro, small and medium sized businesses in the country.  Normally a minimum wage increase happens in El Salvador after a prolonged discussion by the National Council on Minimum Wages, but this time the increase was approved in record time with the approval announced by Minister of Labor, Rolando Castro, one of the officials named on the Engel List.

At the same time, Bukele announced that the government would deliver another round of 2.1 million food relief packets to Salvadoran families.

Bukele’s government also announced that vaccination availability was being lowered to all those aged 25 and above.

Bukele’s response to the Engel list has followed the same playbook as his response to prior allegations by the press or the previous attorney general of potential corruption in his government. He does not respond directly to the facts of the allegations.   He does not actually deny the allegations.  Instead, (a) he attacks the persons uncovering the corruption; (b) he points to past corrupt figures in El Salvador and says “but what about them?” and (c) he changes the subject of public debate to something else.

To be sure, past attorney generals and past governments in El Salvador have been slow and ineffective in prosecuting corruption, with the notable exceptions of the three presidents Flores, Saca and Funes.   ARENA should be required to disgorge the diverted Taiwan relief funds.  Roberto D’Aubuisson should be discarded on the trash heap or sewer covers of history.  Former San Salvador mayor Ernesto Muyshondt should face justice for payoffs to criminal gangs.  The list in El Salvador of potential defendants in corruption cases is a long one which crosses all party lines.

But acknowledging past corruption, and the failures to prosecute it, does not excuse covering up or ignoring current corruption. Bukele and his supporters refuse to clean their own house, or even to acknowledge that they should investigate whether the house needs cleaning. The gains for the country through positive steps like increases in minimum wages, support for the poor and vaccination campaigns, could be wiped away if current corruption is not addressed.