Top Stories of 2020 from El Salvador 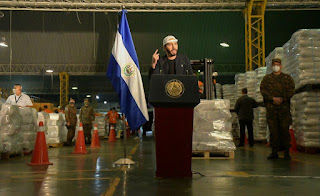 Here is my annual list of the top stories from the past year in El Salvador.  Perhaps not surprisingly, president Nayib Bukele ends up being mentioned in all but one of the stories as he dominates the political landscape and the national conversation.  This list is not in order of importance.
Bukele and soldiers march into Legislative Assembly
At the beginning of February, president Nayib Bukele was frustrated that the Legislative Assembly had not approved a loan request to fund various military and public security items. He insisted that the legislature come into session to vote on his request on Sunday, February 9.  When the bulk of legislators did not respond to his call, after deploying security forces across the capital, Bukele marched into the chamber of the Legislative Assembly, escorted by armed troops in combat gear.   He sat himself in the chair of the president of the Assembly and proceeded to pray, leaving several minutes later.  He then spoke to supporters outside with an announcement that God had told him to give the congress some more time to approve the loan.
Critics denounced the attempted intimidation of the legislative branch as a step towards authoritarianism, a breach of separation of powers and a throwback to the use of the military in political affairs from days before El Salvador’s civil war.

According to the official tally of confirmed deaths, the novel coronavirus claimed the lives of 1343 Salvadorans in 2020.  But all acknowledge that this number is a significant undercount as many have been buried without ever receiving a COVID-19 test to be included in that tally.

The response of Bukele’s government has had both successes and excesses.  The early closure of El Salvador's borders and lockdown was credited with significantly delaying the arrival of the virus, but it stranded Salvadoran citizens around the globe, and the lockdown was enforced by arbitrary detention of persons in contention centers who strayed outside their homes.  The government improved hospitals around the country, and rebuilt the convention center as Hospital El Salvador, but continuously overstated its accomplishments and refused to acknowledge shortfalls.

As the new year begins, the country faces the spectre of a new surge of cases arising from fatigue with sanitary measures and holiday gatherings.

Fights among branches of government
The year 2020 was marked by nonstop conflict between the branches of Salvadoran government. This was almost inevitable as a president with great popular support faced off against a Legislative Assembly filled with his opponents.

The first months of the pandemic were marked by fights over the president’s emergency powers.    Bukele claimed a need for almost unlimited powers to impose lockdowns, to choose the manner to enforce lockdowns, and to decide when and how to spend funds to address the pandemic without oversight by legislators.  The Assembly pushed back, and the Constitutional Chamber of the Supreme Judicial Court largely backed the Assembly.  Bukele ignored several court rulings anyways.
The Assembly started to issue summons for high government officials to appear before it to answer questions.   The head of the police refused to bring the Minister of the Treasury to the Assembly when that Minister refused to appear, which led the Attorney General to commence proceedings against the police chief.

Homicide reduction
2020 saw a continuation of the dramatic decline in homicides which coincided with the start of Nayib Bukele’s time in office.    Bukele asserts that the reduction is entirely due to his hard line security policy, the "Territorial Control Plan."   Expert analysts do not actually see a significant decline in the control of neighborhood territories by gangs, but clearly gangs have decided to lower the level of homicidal violence that has marked the country in recent decades.  Whether that decision is a result of a unilateral choice by the gangs or the result of negotiation with the government remains unclear in light of El Faro's report that Bukele administration officials had held meetings with top gang leadership in the prisons.
A final year of cozy US relations
Throughout 2020, El Salvador continued to enjoy a US administration which declined to issue any strong criticism of the Bukele government in return for El Salvador assistance on migration.   And US Ambassador Ronald Johnson acted as one of Bukele’s leading cheerleaders, regularly appearing at photo ops with Bukele and highlighting their friendship.   All of that is likely to change, however, with the incoming Democratic administration of Joe Biden and ambassador Johnson departing on Inauguration Day.  Democratic leaders in Congress were critical in 2020 of Bukele’s attacks on the press and tendencies towards authoritarianism, and perhaps Bukele should not have written them off as puppets of George Soros as the Democrats gain control of both chambers of the US Congress.  As a foretaste of the change in relations, a measure in end of the year legislation passed by the US Congress prohibits El Salvador, Guatemala and Honduras from receiving future military aid.

Bukele's war on the press
As investigative journalists published stories about acts of corruption within his administration and meetings with gang leaders, Bukele stepped up attacks on the press, particularly independent investigative journalism.  Bukele's ever more strident attacks on the press, coupled with his willingness to employ tools of the state such as financial audits and suggestions of the existence of criminal investigations, have sounded alarm bells inside and outside El Salvador. Bukele repeatedly calls articles which are critical of him "Fake News."   When it is asserted that he is endangering freedom of the press in the country, he argues that no one is exercising censorship and that news outlets continue to publish negative articles about him without being shut down.
Corruption in pandemic contracting
As hundreds of millions were directed towards dealing with the coronavirus pandemic, numerous instances of corruption came to light.  Investigations revealed contracts with family members of government officials at inflated prices and purchases of medical supplies from questionable sources.    The anti-corruption commission initially promoted by Bukele, the CICIES, and the attorney general got involved, raiding several government offices.  One of the raids produced the spectacle of police officers acting as security guards to block access to investigators from the attorney general’s office.

Jesuit Massacre Trial in Spain
At long last, a trial was held under recognized judicial principles, to hold to account one of the military commanders responsible for the 1989 massacre of six Jesuit priests, a co-worker and her daughter. The trial took place in a Madrid court under principles of universal human rights jurisdiction. The Spanish court convicted former Colonel Inocente Montano, the sole defendant who could ever be brought to Spain.   Despite the fact that only Montano was on trial, the proceedings offered the whole world a detailed look at the planning, execution and cover-up of the atrocity.

Ongoing impunity in El Salvador
But in El Salvador, cases seeking to bring justice for atrocities during the civil war were faced with roadblocks. Following the conviction of Montano in Spain, the Criminal Law Chamber of El Salvador’s Supreme Judicial Court decided that all claims arising out of the Jesuit massacre against the rest of the military should be dismissed. In the case of the El Mozote massacre, Bukele instructed the military not to comply with the judge’s order to open military archives to review.   No other cases of human rights violations from the civil war made any meaningful progress during 2020.

Lawrence M. Ladutke said…
The gang negotiations should be its own story of the year, not just a single line in the reduction paragraph.
12:04 PM