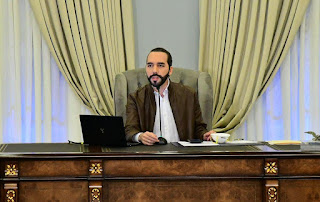 The president of El Salvador, Nayib Bukele, is extraordinarily popular according to all recent public opinion polling.  In fact, in poll results published in July 2020, the Mexican Mitofsky polling firm shows Bukele having the highest approval rating among world heads of state, with an approval rating of 84%. (This is not the first time a Salvadoran president has led the world in Mitofsky poll approval ratings, Mauricio Funes also enjoyed an 84% approval rating and now is is a fugitive from corruption charges living in Nicaragua).  Nothing in the news seems to pull Bukele's ratings lower.

Bukele's poll numbers have remained consistently high even following a number of events which have drawn criticism both in the domestic press and internationally.   Despite such actions as a harsh lockdown in the early months of the pandemic sending people to "contention centers" for quarantine violations enforced by the military,  or disregarding rulings of the country's Supreme Judicial Court, or marching with troops into the Salvadoran congress, or numerous reports of contracts benefitting public officials, Bukele emerges unscathed.

According to Óscar Picardo Joao of UFG:

[Bukele's] media strategy, the constant presence in social media networks and all the machinery of the Executive available in his favor produces a favorable scenario for his image and reputation, which has been shielded and manages to convert all the criticism (such as with cases of corruption, and the February 9 [incursion in the Legislative Assembly with armed soldiers]) into perceptions of a campaign against the president.

In fact, 52% of respondents in the UFG poll answered that recent cases of corruption uncovered by the media would not impact the success of Bukele's party Nuevas Ideas in upcoming elections.

Bukele has managed to weave a powerful propaganda-communication apparatus that he uses for self-promotion and also to undermine critical voices. This network of dissemination of achievements - and of harassment and demolition of opponents - is especially vigorous in social networks, and is complemented by the work carried out by a network of youtubers and tweeters who believe in the political project.

These polling results have important ramifications for national elections which will take place at the end of February in El Salvador.  All the members of the country's Legislative Assembly and all of its municipal governments will be elected.   Bukele who today faces a holdover Assembly filled with his political opponents, may be able to achieve a super-majority of 56 seats in the 84 member legislature.  This would allow his government almost free reign to implement its agenda with little oversight.

The recent UFG poll showed the super-majority to be a reasonable possibility:

For members of the Legislative Assembly, 48.0% said they would vote for candidates from Nuevas Ideas, and the next highest political party was GANA, an ally of Nuevas Ideas, with only 6.1%.  (34% were undecided or not planning to vote).