What Bukele wants to talk about

This post looks at primary social media themes of Nayib Bukele and his government in the past month.  In that time, Bukele has announced a number of new initiatives.   For those who are Bukele critics, you can bookmark this page and come back to it in the future to highlight any unfulfilled promises.   For those who are fans of Bukele, you can read this page as a description of what the future may hold.  The videos also serve as examples of the sophistication of the Bukele message machine.

Education.   On September 7, Nayib Bukele announced an education initiative.  The government has already provided notebook computers to public school students in upper grades and tablets to younger students.  Under the My New School Initiative, Bukele announced that the country would build or remodel 5150 schools in five years.  He announced that curriculum and textbooks were being revised, and teachers were being re-trained.

Surf City.  Bukele announced new road and infrastructure improvements along the Pacific coast in the eastern section of the country between Punto Mango and El Cuco beaches where currently there is only a dirt road.  He labelled the area Surf City 2 as a new focal point for tourism development. In the original Surf City area in the Department of La Libertad, Bukele announced that a variety of infrastructure and commercial developments were planned from Puerto Libertad to El Zonte. There was also the opening of an amusement park with ride attractions provided by China.

Anti-trash campaign.  El Salvador has a visible trash problem which the government is promising to fix under a "Zero Trash" campaign.  On Sunday, youth in Nuevas Ideas colors spread out in litter pickup efforts throughout the country, and there were images of Ministry of Public works teams excavating a long ravine where solid waste had been dumped.  There is also public service messaging about not littering, and legislative proposals to increase penalties for littering.

Days With Zero Homicides.  Bukele regularly tweets that El Salvador has had a day without homicides according to his government's statistics, which he attributes to the State of Exception and his war on gangs.  For my detailed review of those statistics, see this post.

Independence Day September 15.  After a two year pandemic-caused absence, a national Independence Day parade is returning to San Salvador.  The Bukele regime has labeled it the "Parade of Our True Independence."  The parade will feature school bands and peace bands as well as firefighters, the police and the branches of the armed forces. 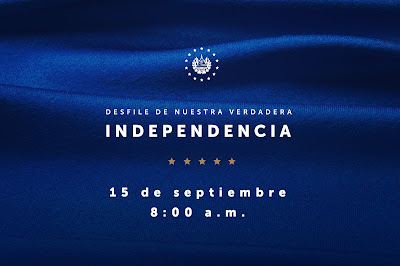 The official parade route ends at Parque Cuscatlan in central San Salvador.   The park also happens to be the gathering point for a protest march by those who oppose what they decry as the authoritarian regime of Bukele, especially the abuses of the State of Exception. 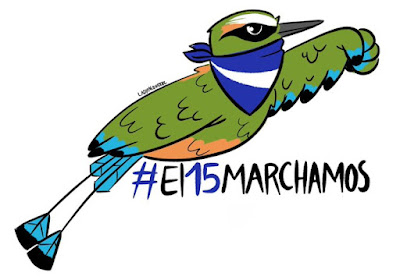