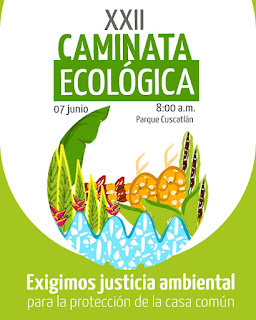 Earlier this week, El Salvador's environmental groups came together for the 22nd annual Caminata Ecológica or "Environment March".   They walked through the streets of the capital San Salvador under the theme Exigimos justicia ambiental para el cuido de nuestra casa común -- "We demand environmental justice for the care of our common home."

The march began at Cuscatlan Park in the center of San Salvador and proceeded towards the presidential palace, although barricades and riot police stopped the march short of the palace.  March leaders were not greeted by anyone from the executive branch, but could only deliver their letter at the correspondence window.

There were dozens of groups represented, advocating for protection of the environment and natural resources of El Salvador in a variety of contexts. The organizers issued a statement on the day of the march and held a pre-march press conference to amplify certain themes.

Some of the issues which marchers highlighted on their signs and banners included: