This is a story of being swept up in the mass arrests and detentions which have been the hallmark of the current State of Exception in El Salvador.  There are many stories of arbitrary detentions of people who have no links with the country's gangs according to their neighbors and people who know them well.  This is just one example, but one which has broad consequences for an entire community and not just for the men detained.

On May 13, the National Civilian Police and the Salvadoran Armed Forces announced that they had arrested a group of supposed "collaborators" with MS-13, accusing them of transporting drugs and supplies, to the islands in Jiquilisco Bay.  The boats they operate were seized by the security forces.

Another man was seized around the same time, making the total five.   Their names are Salvador Antonio Herrera, Samuel Perez, Nestor Edgardo Hernandez Guzman, Manuel de Jesus Gutierrez Palacios and Carlos Alberto Herrera Gutierrez. The men are "lancheros" or boatmen.   They operate the small colorful boats which ferry people and goods between the Isla El Espiritu Santo and Puerto Triunfo.

But local residents say that the allegations of the security forces simply aren't true.  They say the five men live on the island and are all well known and trusted members of this small community with deep roots there.  Besides, residents say, the island has never had the presence of gangs.

The arrests of the boatmen leave the island without a key lifeline to the mainland. Students who go to school on the mainland, have no transportation.  Little stores on the island cannot get supplies to replenish their stock.  Families have lost the economic support of their husbands and fathers.

El Salvador Perspectives has received 14 sworn declarations from community members on Isla El Espiritu Santo regarding the detained boatmen, which provide the backgrounds of a group of honest men, making a living with their boats and the need to ferry people from Puerto Triunfo to the island:

JOSE SAMUEL PEREZ PERDOMO.  Samuel Pérez has lived on Isla El Espíritu Santo since 1982 when his family left his hometown of Jiquilisco to flee the war.  Since 1988, Samuel Pérez has worked as a boatman on trips from Puerto el Triunfo and Isla El Espiritu Santo.   He makes round trips  for high school and university scholarship students for the Centro de Intercambio y Solidaridad (CIS) since 2011, and is known for caring for them as if they were their own children.  In addition, Samuel Pérez employs his boat to make trips for seven stores on the Island to bring fresh food and merchanside, and, on occasion, tourist trips. 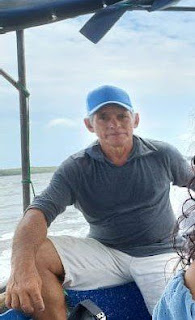 He has always been a responsible man in his work and has ensured the well-being of each young person with whom he journeyed. When a young person takes a long time at his school and it is already too late to walk alone through the streets of Puerto El Triunfo, he goes to the school to wait for the young person and walk with them to be sure that they arrive safely to the pier and to their home. When a young person had a problem he would take charge of advising them, offering an example of how difficult their life would be without education, motivating them to continue studying so that they can have a decent life. He was always in solidarity with the young scholarship recipients.

SALVADOR ANTONIO HERRERAR is 48 years old and has lived on the island for decades.   After four years of working as a fisherman, he began to work as a boatman in 1993.  He and his life partner of 28 years live on the island with their three children who depend on his income as a boatman.  He has never had any run in with the law.  His work has included transporting high school students to school in Puerto Triunfo and bringing elementary school teachers to the island.
MANUEL DE JESUS GUTIERRES PALACIOS is 45 years old and the father of two.   He was picking lemons for sale when PNC agents approached him and asked him to drive them in his boat back to Puerto Triunfo.   He agreed to ferry them across the bay, not knowing that when they arrived in Puerto Triunfo they would arrest him.  He was recently diagnosed for a facial paralysis condition for which he was receiving bi-weekly therapy, and his family worries for the interruption of his medical care caused by his detention.
NESTOR EDGARDO HERNANDEZ GUZMAN is 43 years old and long time boatman.   He is a father in a family which economically depends on him, including a baby who carries his father's name.  He is a charismatic man who is well known in the community, including also working on the cooperative on the island.

The youngest of the group is CARLOS ALBERTO HERRERA GUTIERREZ, who is 21 years old with no criminal record and lives with his aunt on the island.  Through his work as a lanchero he helps supports the household and is also a member, along with the great majority of his family, to a local evangelical church.

The residents of the island note that the allegation that these boatmen collaborate with MS-13 is ludicrous.  According to them, it is widely known that Puerto El Triunfo is controlled by elements of the Barrio 18 gang.  No one regularly docking at the piers of that port would ever risk their life by working for the rival MS-13.

Adding to the improbability of these arrests is the fact that an armed forces outpost exists on Isla El Espiritu Santo.  Persons arriving on the island are subject to verification of their identities by the armed forces who know the comings and goings of all these boatmen.  For visitors who do not live on the island, the security outpost maintains their identity documents until they depart the island.

The community is organizing to seek the release of the five boatmen.   They hope that making known the facts of their honest working backgrounds and the seemingly random nature of their arrests will prompt authorities to release them.  There is tremendous pressure on the courts and authorities not to release anyone during the State of Exception, but the residents of this peaceful island, where the gangs have no presence, feel they must try.

The human rights group Cristosal has received denunciations of more than 550 human rights violations during the State of Exception, and 87% of those complaint have involved arbitrary detentions similar to the arrests of the five boatmen.   The arbitrary arrests have serious negative consequences on the innocent, from depriving a family of indispensable economic support and the love of a husband and father, to depriving students of their transportation to high school, and threatening the supply routes of local tiendas.  Unfortunately, these arrests, like others, appear more driven by the need to reach the quotas of the Bukele war against gangs, than to determine who is really guilty.

Who Knows? said…
A post on resources for those who have been unlawfully detained, including the Procuraduria, Cristosal, or Siempre Sospechosos, would be much appreciated.
8:37 AM