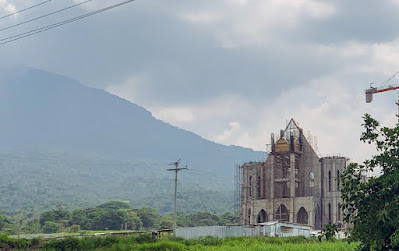 Drivers in the San Salvador area in recent months have seen the unmistakable skeleton of a gothic style church, complete with flying buttresses, rising up in a suburb of the capital city.  An ultra-conservative sect of the Roman Catholic church is building the church in the municipality of Apopa just northeast of San Salvador.  The group, named Heraldos del Evangelio (Heralds of the Gospel), is constructing a religious center and shrine to the Virgin of Fatima on the site at the base of the San Salvador volcano in an area known as Valle El Angel.

The newspaper El Diario de Hoy recently published an overview of the Heraldos' plans for the church currently under construction. In addition to the church, the Heraldos hope to erect a spirituality center including include a school, a museum of sacred art, auditoriums and a space for outdoor events. 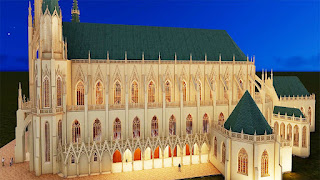 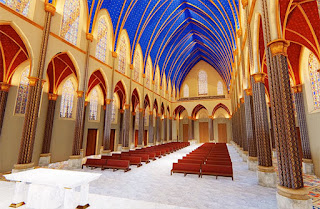 Renderings of the future church from the Heraldos El Salvador website.
So far the most visible element is the partially-completed gothic-style church dedicated to the Virgin of Fatima.  When completed, the church will occupy 2500 square meters, with a tower reaching a height of 70 meters and have seating for 850 persons.
The physical location offers the backdrop of the San Salvador volcano. It is located on the edge of the Valle el Angel mega-development which has been roundly criticized by water advocates for its negative impact on the environment. A Heraldos project in Spain has run into similar concerns from environmental groups.
Apparently in response to concerns raised about the environmental impact of the new church and spirituality center within the zone of Valle El Angel, the Heraldos have a video on their website celebrating a plan to plant 700 trees on their land to help reforest an area which is now sugar cane field.
Heraldos del Evangelio were founded in 1998 by Brazilian priest Monsignor João Scognamiglio Clá Dias., and the Heraldos became a "Private Association of Christ’s Faithful of Pontifical Right" in 2001.  In 2019, the Vatican under Pope Francis, appointed a Brazilian cardinal as a commissioner over the international affairs of the Heraldos after a series of concerns about the sect had arisen.  The Heraldos protested that the Pope's action was "illegal."
This article in The Tablet provides the background:

The Heralds are renowned for their medieval-looking dark brown tunics with a large cross on their chest, and black riding boots. Lay members practise celibacy. They are made up of 200 priests and 2,820 consecrated members and are present in 78 countries....
In Brazil, the group is known for going into the country’s favelas after the Protestant evangelicals in an effort to reconvert those who chose to abandon Catholicism.
But it is also strongly linked to groups in the Church which oppose the reforms of Pope Francis. In 2017 the group was embroiled in a bizarre incident when a video surfaced of their leader and founder describing an exorcism performed by a Heralds’ priest.
In the video, Mgr João Scognamiglio Clá Dias tells fellow priests that the devil had told the exorcist that Francis was “my man” and that Satan said the Pope was “stupid” and “does everything I want”. The video, and the probe that ensued led to the resignation of Dias.

Whatever the fallout is between the Heraldos and the Vatican on the international level, in El Salvador, they seem to be full speed ahead on the construction of their new church, which will be the largest Roman Catholic church constructed in the country in many decades. There is no public information I could find regarding the cost of the project or the source of its funding. This comes at the same time that fewer and fewer Salvadorans are identifying themselves as practicing Catholics.
A video report from La Prensa Grafica regarding the Heraldos church project:

Jared Pérez said…
What surprises me the most is that in the 21st century, Catholic churches are still being built. On the other hand, we are talking about El Salvador, a country that can praise god and bukele for any trifle in the same sentence. We are doomed, an not in the theological sense.
11:55 AM

Charly Boqueron said…
the plan to build that church has been around for many years and they broke ground a long time ago. i'd always been surprised that someone would build a church, especially one of that scale in the middle of nowhere but it started making sense when the valle el angel development was granted the water and environmental permits. it seems the sanctuary will become a pillar for the development of the new community there. it would be good to know who supplied the land for the church and who's donated money to begin construction because it's likely the dueñas family are the main sponsors of the project because of their interest in developing the area ahead of the full scale construction effort to build the commercial and residential components of the development project. i recently saw this picture (link below) on social media and it hints a little bit of the scope of the project in light of costs and financing.